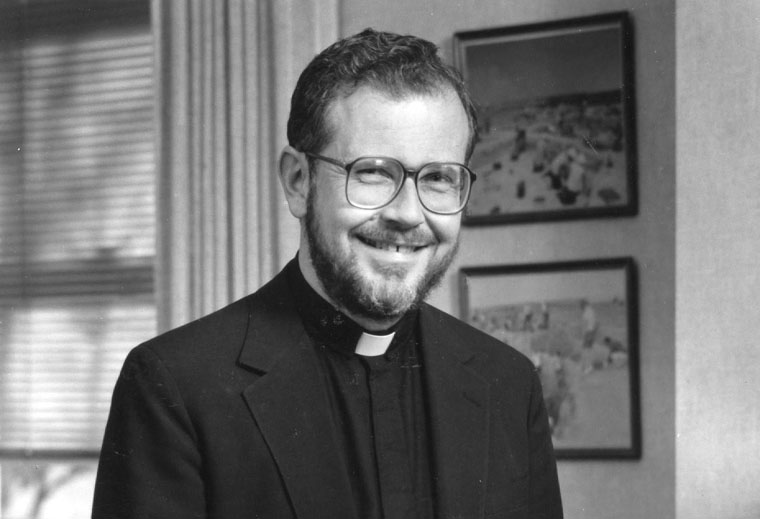 Father Kevin G. O’Connell, SJ, the ninth president of Le Moyne College who served in that role from 1987 to 1993, died peacefully Jan. 21 at the Campion Health Center, a Jesuit facility in Weston, Mass. He was 77 years old.

“Father O’Connell was diligent and energized to make Le Moyne a better place,” said Mike Curtin ’62, who was on the College’s Board of Trustees during Father O’Connell’s tenure and later served as Board Chair. “He never forgot that Le Moyne was a Jesuit institution and brought his considerable talents to improving the College for the betterment of its students and all constituencies.”

“The thoughts and prayers of the entire Le Moyne community are with Father O’Connell, his family and friends,” said President Linda LeMura. “His contributions as president still resound on campus today and he has remained active in our community, including regular attendance at our Founders’ Day Gala. His apostolic ministry in the Middle East has served to connect Le Moyne with that part of the world and also helped in our efforts to recruit international students.”

Since leaving the College, Father O’Connell was involved in a number of Jesuit-related activities in the U.S. and abroad, including working for more than 15 years as an administrator and pastor at the Jesuit Center in Amman, Jordan.

Born in Boston, Mass., he entered the Society of Jesus in 1956 and was ordained in 1969. He received a B.A. in Arts, Classics and Philosophy from Boston College in 1962, an M.A. in Philosophy from Weston College-Boston College in 1963, a Doctorate in Philosophy, Near Eastern Languages and Old Testament from Harvard University in 1968, and Master of Divinity from the Weston College School of Theology in 1969. Prior to coming to Le Moyne, he taught at the Weston Jesuit School of Theology, and also taught and chaired the Religious Studies Department at John Carroll University, a Jesuit institution in Cleveland, Ohio.