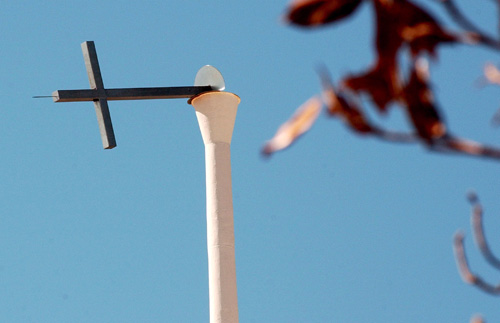 NEW ORLEANS (CNS) — New Orleans attorney Brandon Briscoe was a second-year pre-theology student at Notre Dame Seminary in 2005 when he took a photograph of Department of Wildlife and Fisheries workers evacuating him and 20 others from the seminary on the afternoon of Sept. 1 — three days after the landfall of Hurricane Katrina.

From there, the stranded were taken to dry land. Briscoe joined the rescuers on the back of their pickup truck and was taken to Lafayette, where he rented a car to join his displaced family in Mississippi.

About 40 Notre Dame seminarians, faculty, staff and guests had chosen to hunker down at the seminary during the storm for various reasons, Briscoe said.

“A number of us did not realize what we were in for,” said Briscoe, who was 24 at the time. “The building is a four-story brick building with generators, so we thought we could ride out a typical storm. We had enough food in the freezers to feed 100 seminarians for a month.”

They stayed for other reasons, too. Before the storm, a number of them were busy helping frail residents of a New Orleans nursing home onto evacuation vehicles. After the hurricane’s landfall, the young men were enlisted to patch the seminary’s roof and clean up water that had leaked into the basement.

The seminarians’ whistle-while-you-work feeling of having dodged the bullet turned to real concern by that Tuesday morning, Briscoe said.

“We were busy cleaning up tree limbs when we noticed a trickle of water making its way toward us,” he said. “We saw water came around the seminary’s circular driveway from each side. It met in the middle and rose and rose. There we were, scooping water out of (the basement), thinking we just had to get it dry, and before long it was under four feet of water.”

The rescue took place in stages. A National Guard truck on the night of Wednesday, Aug. 31, only had space to take about half the seminary group.

“We expected (the truck) to be back first thing Thursday morning, but it never came,” Briscoe said. What did show up later that day were rescuers manning four Department of Wildlife and Fisheries boats.

Rather than feeling relief upon their arrival, Briscoe remembers feeling oddly anxious about the situation.

“We didn’t know where they were going to take us — to the Superdome or one of the interstate exchanges where the helicopters were landing. We were leaving conditions that we knew for conditions we weren’t sure about.”

Briscoe said the moments he did not photograph — during his four days of shelter at the seminary — stand out more than his memories of being rescued.
Briscoe, another seminarian and a seminary faculty member were credited with saving the life of an elderly woman who needed medical attention. They brought her to an ambulance stranded at a nearby gas station, using a plastic tub as a boat and then she was taken by boat to a place where she was airlifted to a Houston hospital for treatment.

“The low point was watching people wade up and down Carrollton Avenue in need of help but not being able to render assistance to them — it was a feeling of helplessness,” Briscoe said. “All we could do was pray.”

Briscoe completed two more years of seminary studies before discerning a call to marriage and pursuing a law career. He and his wife of four years, Sarah, have a daughter and are expecting a son.

“It was important to Archbishop (Alfred) Hughes to have the cathedral opened as quickly as possible after the storm as a symbol of hope, so some of the seminarians were recruited to help run the parish,” Briscoe said. “And now, St. Louis Cathedral has become my home parish. Katrina helped me find my parish home.”