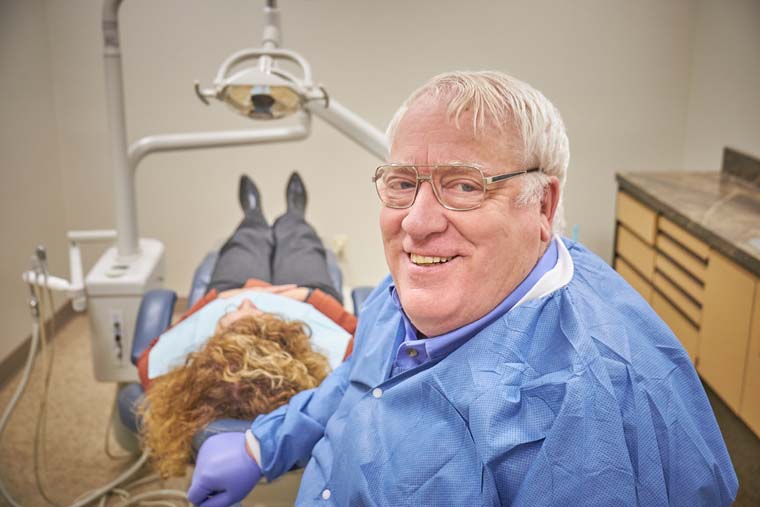 How many dentists bubble about water?

It’s usually a humdrum presence, flowing forcefully out of a tiny shiny faucet into a little paper cup for rinses. It swirls with a hollow clucking sound around the rinse dish; it sprays from an air/water syringe in concert with the drill.

At Amaus Dental Services, an outreach of the Cathedral of the Immaculate Conception in Syracuse, the all-volunteer staff has been offering free dental care for people who are financially fragile or uninsured since August 2014. There is one room, minus plumbing, for the dentists. Below the sink are three 5-gallon plastic jugs: White holds the hot water; green, cold water; blue, the drained water from the other two.

The boxlike portable dental unit — like one that would be used at a medical mission overseas — is fairly old, with a small compressor, and is not very functional anymore. The light above the sole dental chair has ceased working, so the dentists wear head-lights.

Very soon, though, the dentists will get their dream suite, which they hope will entice more dental professionals and lay people to volunteer.

On Jan. 5, a volunteer crew installed a donated digital panoramic X-ray machine; new, it would cost $80,000-$90,000, one worker said. The staff also pointed out a mighty compressor ensconced in its own permanent compartment. Tools hummed like a dental drill, and snapped and echoed like a loud cap gun. The finished office will include an evacuation system for the air and water used during treatments, and three new rooms right next to one another: the hygienists’, the dentists’, and the oral surgeons’.

The whole area upstairs in the Bishop Curley Building — Suite 202 — has started to look much more pleasant as a result of the 1,000-square-foot expansion. About 400 people have been invited to an open house Feb. 10 and 11.

“We have chosen all organic, subtle tones to make the dental experience for our patients a little more calm and inviting,” said Amaus Administrative Director Kathleen M. Komar. She noted that the lilac color is everywhere, in addition to nice carpeting.

In the last fiscal year, Komar said, Amaus saw more than 300 patients from 22 countries and provided $100,000 worth of dental care, all for free. In upstate New York, patients have come from as far away as Binghamton, Massena, and Cooperstown.

Some of the patients once had a good-paying job but lost it. Others include refugees who settled here but cannot find a job. According to the staff, decayed teeth can hurt self-confidence and also hurt hiring chances.

Komar has been to the Syracuse Samaritan Center, where she has observed people who have lost their chattiness because their tooth infection has spread to their cheek. Some Amaus patients have been to an emergency room, where they receive antibiotics and pain medication but no actual dental care.

With the expansion and the additional staffers who have volunteered, she figures that Amaus can triple its number of yearly patients.

Amaus will help them with what Dental Director Dr. David R. Dasher calls a “limited scope of care.” Amaus does examinations, cleanings, fillings, and extractions. It does not do root canals, crowns, or replacement of missing teeth.

Dr. Dasher figures that Amaus’ ton of talented workers and patients deserve better than a 5-gallon-jug setting. Now, the sinks will have sensors for hand-washing. “We actually have plumbing now — what a concept!” he said. He donates five hours on Wednesdays at Amaus and then works the other four days as the Dental Director at the Syracuse Community Health Center.

Dr. Dasher has practiced dentistry for 40 years. He had eight years of Jesuit education, so he knows the importance of charity.

“I just want to keep supporting and helping people,” he said. He keeps it up even though he has had a couple of surgeries on his back.

Nimble with a dental tool, Dr. Dasher is quite good with a pen too.

At Thanksgiving time in 2015, he sent out a letter to all 263 dentists in Onondaga County. He wanted to improve the Amaus facility, so he asked them to send a check for $1,000. He got 27 checks totaling $27,000. With additional support from the Cathedral’s rector, Msgr. Neal E. Quartier, foundations, and others, Suite 202 is becoming a stunner.

“This is a good project,” Dr. Dasher said. “The idea of it is good: free dental care for those who can’t afford it. It sort of sells itself. I’d like to say I’m a master salesman, but I think it’s because it’s a good project.”

Dr. Dasher is a man who “resurrects. He’s got some awesome vision,” said his Amaus colleague Dr. Robert Fangio, DDS, who is also a deacon at Holy Family Church in Syracuse.

Dr. Fangio retired from his private practice at the end of 2014 and came aboard Amaus in 2015, working a couple of days a week. He is currently, as Dr. Dasher calls it, on “injured reserve” due to shoulder surgery, but he’ll be back.

“Our clinic here is really one of a kind,” Dr. Fangio said. “There’s really nothing like it in Central New York where someone can come and have dental work done at no charge for those individuals who don’t have … governmental assistance, who don’t have insurance of their own.

“It’s those people who are living day to day, paycheck to paycheck, and taking care of other responsibilities of life, and not having the ability to get a front [tooth] fixed, or something like that.”

Amaus does not discriminate based on religion or any other criteria. Both doctors noted that patients do not seem to mind that the dental room has a cross on the wall. It has precipitated some interesting conversations, Dr. Fangio said.

Dr. Dasher’s dental assistant is Olga Kondrya, a Syracuse University graduate who hopes to become a dentist herself some day. She works fulltime at the SU iSchool but puts in seven hours at Amaus on Wednesdays.

“I needed experience, I needed volunteer hours,” she said, “but I really fell in love with this place.”

When Suite 202 is up and running, Komar, the administrative director, said that resident doctors from St. Joseph’s Hospital will be assisting, along with trainees in the BOCES dental-assistant program.

On Jan. 5, an enthusiastic crew was working on the suite. The contractor, W.A. Gardner Inc., has donated time and materials. “We’re not going to do a profit-and-loss on this job,” said Brian Gardner, the company president. “It’s just for the greater good.”

Another donor working on the project was Patterson Dental. The Patterson Foundation has a branch in Victor, in Ontario County. “We use our time and our skills and get the equipment delivered here and help get it set up and connected,” said Patterson technician David Brownson.

Kip Williams, also a Patterson technician, said, “We donate a lot, and we had other manufacturers that donated. … It’s helping neighbors. We live here, and we’re helping the community.”

As the crew went about its work, Dr. Gary Schopfer showed up carrying a big plastic case filled with dental-surgery instruments that he was donating. Dr. Schopfer retired as a Liverpool oral surgeon a year and a half ago. He didn’t sell his practice; he donated about $10,000 worth of surgical equipment. He also gave Amaus a surgical chair worth around $2,400.

On Jan. 5, he donated even more: over $3,500 worth of tools including surgical packs, forceps, and curettes.

“I care for what it’s doing,” Dr. Schopfer said of Amaus.

He added: “I’m so glad that Bob [Fangio] and Dave [Dasher] had the vision. … They’re great people.”

Who need bells and whistles when one has a cross on the wall, volunteers, and plumbing?