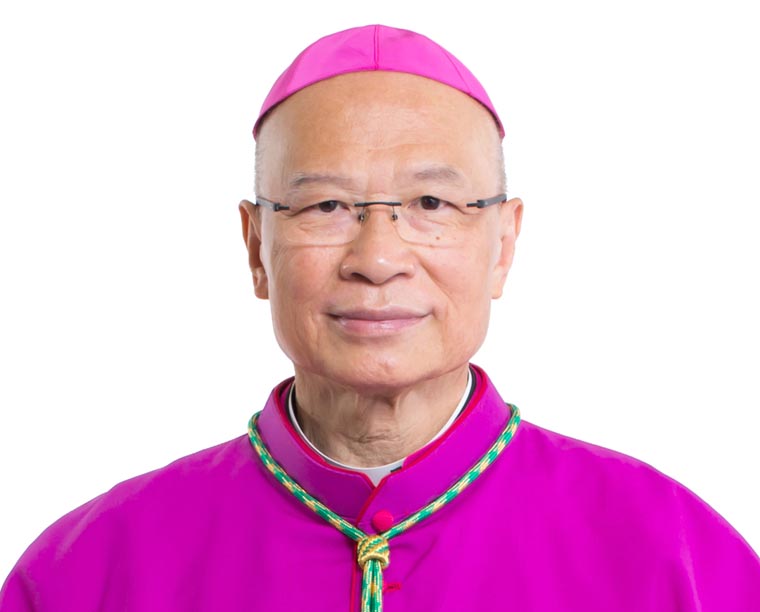 The Syracuse area was quite important to the bishop of Hong Kong.

Bishop Yeung Ming-cheung, 73, a onetime refugee who was described by his friends as brilliant, multilingual, thoughtful, humble, loyal, and devout, died of liver failure Jan. 3. He was ordained as one of three auxiliary bishops Aug. 30, 2014; in November 2016, Pope Francis named him coadjutor bishop with automatic rights to succeed Cardinal John Tong Hon.

In the early 1980s, Bishop Yeung earned a master’s degree in communications from Syracuse University. He also earned a degree from Harvard University, a friend said.

“He was the most charming man I have ever met in my life, he was charismatically charming,” said his longtime friend Mary Yeomans, of Fayetteville, N.Y., and Naples, Fla. She added: “He would have old ladies and little children just loving him … drawn to him.” He cooked Chinese dinners for the Yeomans and all their friends, and when he went to Baskin-Robbins he tasted every flavor of ice cream. He kept the friendship going, coming back to visit in summertime. “I’ll make it happen, Mary. I’ll make it happen,” he would say.

When Mary and her husband, Bill, lived in the Eastwood section of Syracuse, the future bishop lived with them for a time. Mary taught the then Father Yeung (who was known as “Michael,” his baptism name) how to drive (in Hong Kong, he used mass transit). And he spoke the King’s English, she said.

“He was extremely friendly,” said retired Father Michael J. Carmola of the Syracuse Diocese. “Secondly, he was extremely spiritual. Very deep spiritually. And when he would give a homily or a conference, it was very deep and yet very powerful. It was beautiful, his talks were wonderful.”

“Enjoyed wonderful early morning jogs with him,” Father Frederick D. Daley, pastor of All Saints Church in Syracuse, said in a voicemail. “We would jog three or four miles each morning and have wonderful conversation. … Very good man, very faithful, committed to the Second Vatican Council but anxious to get back home to Hong Kong to serve the people there. He was a great cook too — prepared wonderful Chinese meals. … It was a gift and an honor to know the young Father Michael Yeung here in the Syracuse Diocese.”

Pope Francis named the retired Cardinal Tong to administer the diocese until the appointment of a new bishop by the Vatican, reported ucanews.com.

A Jan. 5 letter sent on behalf of the pope conveyed his personal sadness to the clergy, religious, and lay faithful of Hong Kong.

“United with them in prayerful thanksgiving for Bishop Yeung’s years of priestly and episcopal ministry, His Holiness commends his soul to our heavenly Father’s merciful love,” the letter states.

“To all who mourn the late bishop’s passing, Pope Francis cordially imparts his apostolic blessing as a pledge of consolation and strength in the risen Lord.”

Mary Yeomans said Bishop Yeung had an 11-hour operation on his liver three years ago; his mother and one of his brothers died of the same genetic liver disease, she said. Ten days before Christmas 2018, the bishop took a fall that shook him up, Mary Yeomans said, and on Dec. 27 he went into the hospital. “The world lost an incredible person,” she said.

Bishop Yeung’s connection to Syracuse began thanks to a Maryknoll priest who is originally from Brooklyn, Father John Ahearn. For the time being, he is living in Woodstock, Vt., because of medical issues. “I was very saddened by his passing,” said Father Ahearn, who teaches in the Hong Kong seminary, pastors a parish, and works in some diocesan commissions. The future bishop was Father Ahearn’s seminary student around 1974. “He was very open and friendly,” Father Ahearn recalled.

He added: “He took me into his family, and they treated me as one of their own. That’s how I learned about Chinese people and their culture, because of him.” Father Ahearn baptized Bishop Yeung’s mother, one of his sisters, and his two brothers.

In Bishop Yeung’s early boyhood, his longtime friend said, life was very hard in Shanghai where he lived, more than 700 miles northeast of Hong Kong, which was a British colony that offered refuge to people who escaped from the mainland.

The future bishop’s father came to Hong Kong first, seeking a job. When he was about five years old, the future bishop and his mother hid in the bottom of a very small boat and made it to Hong Kong, which is on the South China Sea. The boy almost died on the trip, Mary Yeomans said. Many people did die in the process of trying to get to Hong Kong, Father Ahearn said.

The future bishop’s father worked as a chef in a restaurant, and the boy finished his high school studies in Hong Kong and, not having gone to college yet, worked as an accountant. But he knew the bishop and decided to enter the seminary.

Around 1980, Father Ahearn arranged for Father Yeung to stay with the Yeomans as he studied at Syracuse University. He then went to live at Aquinas House, where Father Carmola was in charge. It was a residence for Le Moyne College students who were studying philosophy in preparation for the priesthood; Father Yeung joined the team of Aquinas House directors.

In 1997, Britain handed over Hong Kong to China: one country, two systems —  capitalism in Hong Kong and communism in the mainland, Father Ahearn said. The Church is allowed to function, he said, with Masses and traveling — “a very unusual place.” People are not persecuted in Hong Kong, but there is pressure, he said.

Aid to the Church in Need is an international papal charity that provides pastoral and humanitarian aid to persecuted and oppressed Christians and supports various church projects in more than 140 countries.

“Religious Freedom in the World 2018,” a report released by the organization Nov. 27, is one of the few non-U.S. sources for unbiased documenting of religious-freedom issues. Compared to Aid to the Church in Need’s 2016 report, the religious-freedom outlook is worse in China and 16 other countries.

Father Ahearn had mixed feelings when his great friend was named a bishop. “In a way,” he said, “I was very happy, in a way I was sad because it’s a very difficult job being the bishop of a place like Hong Kong. But he was very effective.”

He said Bishop Yeung was very active in the Caritas Internationalis

education system, which is a Catholic social-welfare movement throughout the world. Caritas is in place in Hong Kong as a result of the bishop’s assistance, Father Ahearn said.

The bishop, he said, was also instrumental in starting the continuing process of getting a Catholic university in Hong Kong.

“He was just a very cosmopolitan person and very dedicated,” Father Ahearn said. “He was very WITH everything. He could communicate very well in Cantonese, Mandarin, Shanghainese, and English.”

“He never acted important,” Mary Yeomans said. “He was just ‘Michael’ always. Brilliant, brilliant man. … Spoke to him just like your brother. … We were all young when we met. … We had a great friendship. It was a real gift.”

In a ceremony when Hong Kong switched over from Britain to mainland China, she said, Bishop Yeung was given a vase; he in turn gave it to her. In addition to being generous, he was “very, very, very holy,” she said: He prayed for a couple of hours in the morning and then again at night.

On Jan. 8 this year, Mary received a Christmas present that Bishop Yeung’s niece had sent. “He did it every year,” she said.

Mary talked to the bishop on the phone at Christmastime 2017; he said he was saying midnight Mass and then serving dinners for charity. “Humble servant and so grateful,” she said.

Mary and Bill Yeomans’ daughter-in-law Monica Yeomans, of St. Petersburg, Fla., is originally from Hong Kong. She watched the broadcast, in Cantonese, of the Jan. 10 Vigil Mass for Bishop Yeung. Monica said that in the eulogy, one of Bishop Yeung’s nieces related the Bishop’s final wish as he expressed it during his final Christmas Mass — to encourage the citizens of Hong Kong to pray for all the Catholics in China.