From border to academia, enthusiasm for papal encyclical runs high 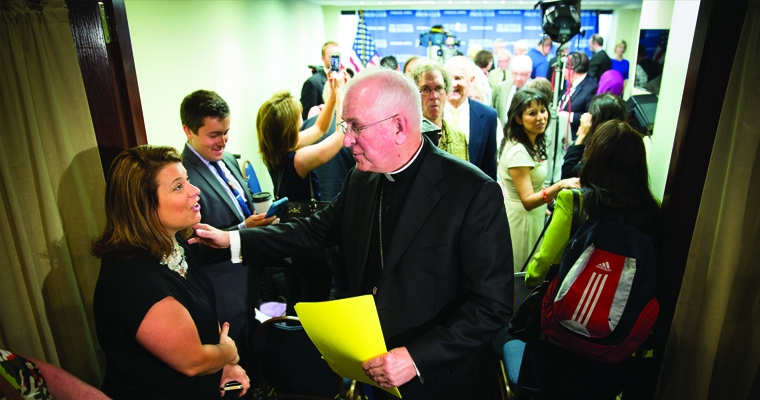 WASHINGTON (CNS) — Long before Pope Francis’ encyclical on care for creation was released, it was providing a boost for a group of women struggling to keep the negative influences of modern-day life from erasing valued Mexican traditions and treasured cultural practices along the Mexico-Texas border.

The dozens of members of El Paso, Texas-based La Mujer Obrera (Women Workers) see the document as a validation of their efforts, according to Lorena Andrade, the organization’s director.

“Everybody talks about progress,” Andrade told Catholic News Service. “Their (mainstream culture) definition of progress is not how we define it on the border, but in how we as women live it.”

From farming practices to how children are raised, members of the Catholic Campaign for Human Development-funded organization have rooted themselves in the earth, she explained.

“When we are working on the land, it’s not about how much we produce to sell. While that’s important, it’s more what is our connection to the land and what our practices are bringing to the land. It’s Mother Earth and us fighting for our survival.”

Andrade said the women with whom she works hope Pope Francis’ call for simpler lifestyles, practices that protect creation, less consumption and greater respect for diversity will legitimize what La Mujer Obrera has been doing since it was established in response to the lost jobs that the North American Free Trade Agreement brought to El Paso more than two decades ago.

“It almost feels like we can use that document to organize the women, but also to be able to clarify our arguments about the way we live,” Andrade said. “It helps with some of the answers to our questions. Our life is about questions. We don’t have a lot of answers. As women, we want the space to figure that out collectively.”

Elsewhere, the encyclical, titled “Laudato Si’, on Care for Our Common Home,” was held up as an important work to help understand the theological basis and a presenting a moral imperative for protecting the earth and its inhabitants — human, plants and animals.

Observers held up various points Pope Francis makes in the encyclical, especially the importance of remembering the lives of poor people around the world and how they are affected not just by climate change, the effect of economic decisions on the environment, the wasteful use of earth’s resources and the growing rift between people with access to technology and those without.

Patrick Carolan, executive director of the Franciscan Action Network, agreed, saying the encyclical calls “people around the world … to really look carefully at our lifestyle.”

“He makes the connection between our lifestyle and the destruction of the environment,” Carolan said.

In response, the Franciscan Action Network is taking several actions itself including a meatless Friday campaign in line with the long-standing Catholic practice of abstaining from meat one day a week. Carolan said that in addition to being a way to come closer to God, cutting back on meat consumption will ease stress on the environment because of the massive amount of energy used and waste generated through meat production.

Paula Garcia, executive director of New Mexico Acequia Association, said the pope’s concerns about water parallel those of residents in the northern part of the state. Under its mission statement, the association believes “water is life” and has achieved major policy changes locally and statewide to protect rural and agricultural water rights.

“It’s such an affirmation to see that our pope is taking leadership responsibility and making statement publicly about the need for us to address (climate change) and protect creation,” said Garcia, who also is in her second term as a county commissioner in Mora County, northeast of Santa Fe.

“Having the encyclical coming out at this time is really critical. Not just politics at the global level, but it’s important for people who go to church every Sunday. It brings a lot of these social justice and environmental justice issues into mainstream conversations,” she said.

Jay Richards, assistant research professor of business at The Catholic University of America, said he wanted to explore the pope’s words as they relate to the relationship of humans to the environment as much as their ties to church and society.

Anticipating that the pope would “come down strongly that humans are responsible for global warming,” Richards said he expects that part of the encyclical will get much of the attention with some comments being taken out of context while the pope’s moral perspectives and the theological basis for his concerns will be widely missed.

Christian Brother Charles Hilken, director of the Bishop John S. Cummins Institute for Catholic Thought, Culture and Action at St. Mary’s College of California, believes the encyclical is a “call to action” to individuals as well as elected officials and economic powers.

“(It is) written with a sense of urgency and also reserve (about the science of climate change),” he said.

At the same time, Brother Hilken expects the pope to be patient and open to dialogue as the encyclical is studied and analyzed.

Sister Paula Gonzalez, a Sister of Charity in Cincinnati, a longtime environmentalist who is known as the “solar nun” for her support for the development of alternative energy systems, told Catholic News Service the pope’s message “is going to thrust the question of planetary realities through the church.”

Noting that the timing of the document falls three months before Pope Francis’ planned visit to the United States and five months before U.N. Climate Change Conference in Paris, she called his document “a gift.”

“People of every faith and not faith are waiting to see what he has to say,” she said. “Everybody in their gut knows we have gotten way too greedy, way too spoiled. We have become addicts of fossil fuels and addiction is a terrible situation.”

In Minnesota, the members of the Hmong American Farmers Association were looking forward to learning more about the encyclical’s references to climate change because their livelihoods can be affected by changing weather patterns.

Pakou Hang, the association’s executive director, told CNS that members of the group were enthusiastic that their practices — diverse crops, smaller acreage, successive harvesting, sustainable practices that preserve topsoil — would be among the kind supported by the pope.

“It will give us more evidence that farming on a smaller scale with diverse crops … is actually good for the environment,” she said.

Contributing to this report was Daniel O’Shea in Washington.