Fun in the Sun! Here come the ’toons! 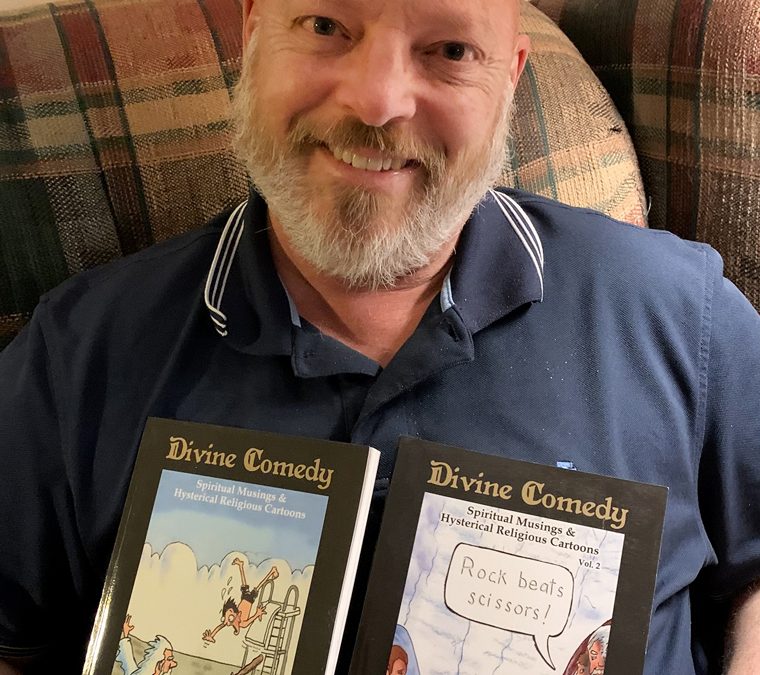 Inspired by God’s grace, artist-deacon will publish his comical drawings in newspaper 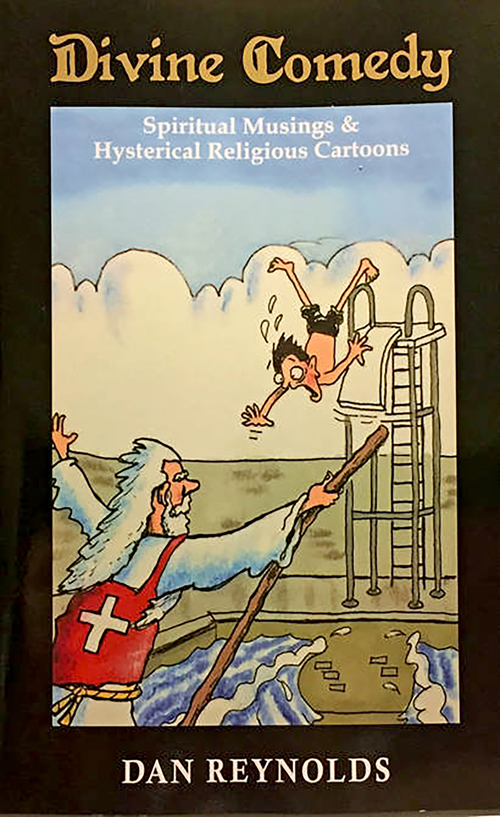 Cartoonist Deacon Dan Reynolds has punned on his own name (“Reynolds Unwrapped”), so why can’t he have some fun with Bible notables.

Asked what they would say if they saw his cartoons about them, Deacon Dan Reynolds said, “Oh I think that they would definitely have a laugh; as a matter of fact, I think that they probably are … already laughing because when people are dead, if they’re in heaven they’re more fully alive than we are. … The cartoon ideas come from the Holy Spirit, so I kind of think of it as my having a ghost writer, the Holy Ghost writer.”

Deacon Dan, of Brewerton, was ordained in July 2020. Starting with this week’s issue (page 11), the Sun will regularly publish his cartoons, which he has been creating since 1989. His bio says Deacon Dan was born and raised a cradle Catholic in Oswego. His resume includes nine years as the Parish Life Coordinator at Divine Mercy Parish in Central Square. On July 1, 2020, Deacon Dan was assigned to St. Margaret Church in Homer, where he is the Pastoral Associate.

For 32 years, he has been a professional cartoonist. His cartoons were published as “Reynolds Unwrapped” in the former Syracuse Herald-Journal. He is distributed nationally via companies including American Greetings, and his work has also appeared in Reader’s Digest, Harvard Business Review, Boys’ Life, Catholic Digest and many other publications. He has four nationally published books with Andrews McMeel Publishing, as well 22 other books that can be found on Amazon.com, including Divine Comedy vol. 1 and vol. 2.

His cartoon work also appeared on an episode of The Sopranos and on Discovery’s Science Channel. Two of his greeting cards won nominations for a Louie Award. A Louie Award is the greeting-card industry’s equivalent of an Academy Award. His other passion is painting religious art.

Does he flip through a book of saints and ask them to suggest ideas to him?

“The answer to that is no,” he said, “but I’ve always tried to picture myself sort of as a lightning rod for whatever God wants to send me, ’cause it’s all a grace. Anything any of us, including myself of course, that we do, it all comes from God so I try to open myself: What do you have for me, God, what do you have for me today, you know? And then, it just comes to me; it’s just kind of like turning on the television set.”

Deacon Dan battled cancer in 2008 and 2009, undergoing chemo treatments along with operations. Just last year, his specialist said he didn’t want to see him anymore because he is now considered medically cured. “Oh, that was great,” he said.

He loves to spend time with his wife, Patti, his four sons and three grandsons (another grandchild is on the way).

A world of joy

William F. Buckley Jr. had once asked Groucho Marx on TV, “Is the world funny?” So, given his religious cartoons, the Sun asked Deacon Dan, “Is Catholicism funny?”

“I would say a better word than funny would be joyful,” he said. “And of course being funny is part of being joyful. So I think if somebody were to pose the idea that Catholicism is just funny, they would be cutting us short. … It has fun in it, but the larger picture is that it’s joyful. …

“Look at the difference between the moon and the sun as analogy to fun and joy. So joy is the source … where funny comes from, but joy is so much more.”

And where does one spot the joy in Catholicism?

“Every living thing that grace touches gives us joy. … There’s always that example of St. Teresa of Avila. She was riding a donkey and … she fell off the donkey, she landed in the mud and she sort of looked up to heaven and she was kind of arguing a little bit with God at that moment in her frustration, and she said something to the effect of, Well, with how you treat your friends it’s no wonder why you don’t have as many as you could.”

Lots of times in his cartoons, Deacon Dan said, “the idea behind it is you get a surprise. … And that’s what makes an impression, and that happens in anybody who has a life of faith. God can be very, at least from our perspective, very unexpected. Like, if you had asked me 10 years ago if I would have ever become a deacon, I would have said no. … But yeah, 10 years later here I am. And I look back and I’m like, Wow.”

Some weeks ago, he started doing a video blog, 60 Seconds in the Spirit, off his Facebook page, he said, “and on that I often will do some humor. … These are very short little videos and they are a combination of instructional or kind of inspiration/also some humorous. … I try to do it daily.” 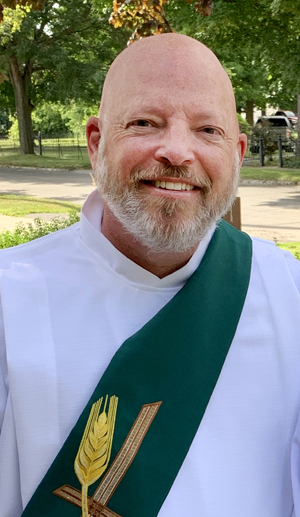 “Does God Have a Sense of Humor?” is a segment he posted Feb. 12. Wearing a Divine Mercy pullover, he sits in what appears to be an easy chair in a sunlit room and says this in the post:

“The shortest sentence in the Bible is ‘Jesus wept.’ Though it doesn’t say so in the Bible, we also know that Jesus laughed. How do we know this? Because Jesus was fully human and fully divine.

“I would also add that Jesus spent three years walking around the countryside with a group of guys. You don’t do that sort of thing unless you have a sense of humor.

“I mean, look at his travel companions. Some of them were fishermen who it seemed couldn’t catch a fish unless Jesus told them what side of the boat to throw the net over.

“And one seems to not be able to make up his own mind, always doubting things. …

“Now Jesus, also being fully God, knew who he was calling to be part of this traveling salvation show. He also called you and me. This cinches it: God DEFINITELY has a sense of humor.”

Regarding another endeavor of his, Divine Comedy presentations, which he has called a “combination of humor, some stories and some jokes,” he said he had put that on the shelf for a few years toward the end of his diaconate studies because he wanted to keep his focus. Now as he’s settling in at St. Margaret’s, he said, he is trying to “pull along with me those things that I think will be beneficial to my ministry.” 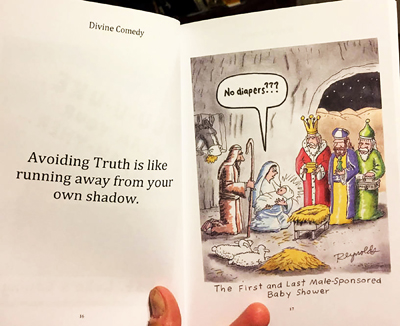 Here are a couple of the inside pages in one of Deacon Dan’s books. “Each one of us has been given special skills, special graces,” he says. See his cartoon on page 11.

Asked if being a deacon has turned out the way he thought it would, he said, “I was told before I became a deacon by other deacons, expect the unexpected. And the fact of the matter is if you expect the unexpected, then you will never be surprised to the point that you’re not able to stay on your feet.”

He added: “I describe myself as the person who’s trying to open the door for people to come into the Church as a porter. … The goal for all of us is the same …, to become a saint. Because if you don’t become a saint well what else is there, you know? … I’m tryin’ to play a long game here.”

And: “I figure if I’m holdin’ the door for other people that’s where everybody gets in and I can just walk right in behind ’em and nobody’ll notice.”

Deacon Dan does not fear the Sun’s deadlines.

“I’ve already got a huge bank of cartoons,” he said, “so I could take a 10-year vacation and not even do a cartoon.”

Is everything as effortless as cartooning?

No, he said, but he tries as much as possible to do things that he enjoys doing: “That way, it’s fun. If you’re a kid and you’re going into a candy store you don’t think of it as work when you’re eatin’ the candy.”

During William F. Buckley Jr.’s interview with Groucho Marx (YouTube), Groucho relates that a priest in Montreal once thanked him for bringing joy into the world.

Deacon Dan said: “I’d love to hear God say that, and that’s what we all want to hear when we’