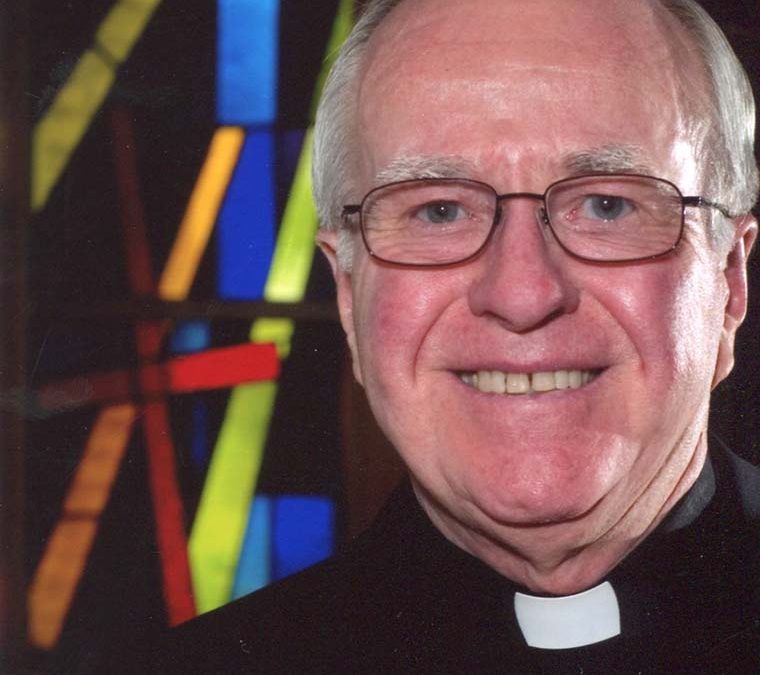 BINGHAMTON — The clergy gathered in the sanctuary of St. Patrick’s Church May 24 for the Mass of Christian Burial for Msgr. James Kane was a virtual microcosm of his life. Principal celebrant Bishop Robert J. Cunningham was flanked on his right by Father Timothy Taugher, Msgr. Kane’s nephew, and on his left by Msgr. John Putano, the current pastor of St. Patrick, the Kane family’s spiritual home for generations.

Just off to one side in the sanctuary stood Father Gerald Buckley, Father Thomas Hobbes, and Father Stanley Gerlock, housemates of Msgr. Kane at the McDevitt Home for Retired Priests. Approximately 40 brother priests filled several pews at the front of the nave.

Msgr. Kane passed away May 20.

At the funeral Mass, the gospel was proclaimed and the homily offered by Father Kane’s nephew, Father Taugher. After sharing the gospel story of the two disciples on the road to Emmaus, Father Taugher cited words Msgr. Kane had spoken in his homily several years ago at the funeral of his brother Father Joe Kane. Father Taugher said, “Jimmy found much in this Easter gospel that spoke to him about the Eucharist, priesthood and community.”

Father Taugher noted that he saw in his uncle’s life the “seven pillars of the priesthood” which Pope Francis said are essential to a vital priestly ministry, “Jim didn’t live his priesthood on a pedestal, but his was a participating ministry,” an example of the Holy Father’s pillar of a priest being “close to the people he serves as to bring the healing power of God’s grace to everyone in need … to be shepherds living with the smell of the sheep.”

Yet another pillar cited by the homilist was that the strength of the priest depends on his relationship with Christ. His uncle, Father Taugher noted, took seriously the instruction in the Constitution of the Sacred Liturgy which states that “the full and active participation by all the people is the aim to be considered before all else.” The hallmarks of Blessed Sacrament Parish mentioned by Father Taugher included eight choirs, both vocal and instrumental; lectors trained to be proclaimers not simply readers; inclusive ministers both men and women as well as youth and adult; art and environment that reflected Msgr. Kane’s meticulous nature; empowered leadership and a welcoming community. Msgr. Kane’s last liturgical project was the updating and refurbishing of the chapel of the McDevitt Residence.

More times than he could count, Father Taugher was asked if his priest-uncles ever spoke to him about a possible vocation to the priesthood. While he could not recall ever being asked verbally, he added, “But what did impact my pursuit was the example of Joe, Jack, and Jim…[t]heir lives and the way they lived their priesthood.”

Father Taugher related how 18 years ago “Jimmy asked a college student at Binghamton University, Kevin Maloney, a question, ‘Have you ever thought about the priesthood?’” That student, now Father Kevin Maloney, wrote of his mentor, “Jimmy made everyone’s life better and we are the people we are in so many ways because of him.”

Before concluding with Pope Francis’ prayer on Authentic Priesthood, Father Taugher summed up his uncle’s ministry with these words: “Jimmy believed that parish life and priesthood are not about maintenance but mission. We celebrate and remember one who truly lived his life and priesthood as a covenant of the heart,” a reference to the theme of an upcoming priestly retreat at Christ the King Retreat House.

In his remarks at the final commendation of the Mass, Bishop Cunningham expressed his and the diocese’s gratitude for the more than 100 years of service to the people of the Diocese of Syracuse by the three Kane brothers. He encouraged the capacity crowd to pray for vocations to the priesthood, since Msgr. Kane was the eighth diocesan priest to die this year and only two men are to be ordained at this time.

Msgr. Kane was laid to rest at the family plot at St. Patrick’s Cemetery. Family and friends celebrated his life at a luncheon at the Relief Pitcher in Binghamton.

Father Donald Bourgeois is pastor of St. Ambrose Church in Endicott and episcopal liaison to the Catholic Sun.