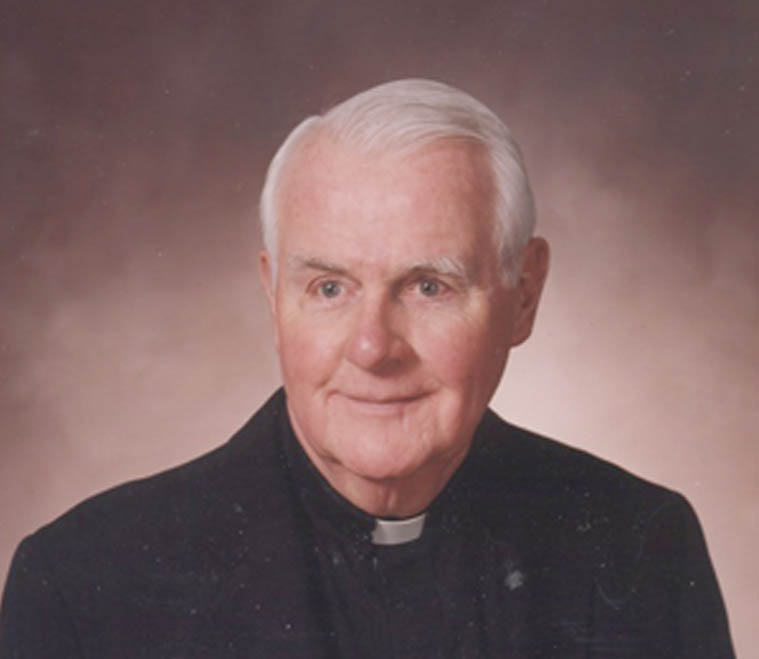 Family, friends, and parishioners filled the pews of St. Mary’s Church in Hamilton Aug. 13 for the Mass of Christian Burial of Msgr. John Madden, who passed away Aug. 10 at the age of 84.

A native of St. John the Evangelist Church in New Hartford and a graduate of New Hartford High School, he went on to study at the University of Notre Dame, St. Andrew’s and St. Bernard’s Seminaries in Rochester, and the School of Sacred Theology at the Catholic University of America.

“Not only were we close friends, but the fact is, I wouldn’t be standing here today before you as a deacon if it wasn’t for him. In fact, I may not be standing among you as a Catholic if it wasn’t for him. At a time in my life when I was confused, lost, and conflicted, God found a way for me to meet this special man who somehow saw something in me that I didn’t see in myself,” Deacon Lehmann said.
He spoke of Father John’s love of Irish Setters; of sports, from tennis to local teams to Notre Dame football; and of his ministry and his Church.

“Father John loved being a pastor,” Deacon Lehmann said. “He was everyone’s Father. He could support and console, but he was also able to give criticism and feedback. He could do that because he was respected and trusted. And he was trusted and respected because he walked the talk.”

“In the Gospel we heard the familiar phrase, that ‘what you’ve done for the least of these you’ve done for me.’ Well, Father took that Gospel very seriously and lived his life accordingly,” Deacon Lehmann said. Msgr. Madden saw the face of Christ in those he fed and housed, the people he cared for as an EMT in Waterville, and those he cared for through his work at Catholic Charities, Deacon Lehmann continued, also noting his work with civil rights, migrant rights, and children in need.

Deacon Lehmann noted how, following Vatican II, Msgr. Madden was excited to explore the possibilities of lay ministry and leadership and was one of the first to initiate and actively use parish councils. He also worked to foster ecumenical conversations, Deacon Lehmann added.

“After serving his church faithfully for many years, on his jubilee year he published what he liked to call his ‘manifesto,’” Deacon Lehmann said.

“This was not in any way a declaration of independence or a divorce decree,” he said. “It was a courageous act of love for his church. He loved the church enough to risk ridicule and derision to put in writing his concerns.”

The manifesto discussed issues of women’s ordination, celibacy, and contraception.

Msgr. Madden was amazed at the letters of support he received, Deacon Lehmann said, but he also got his share of criticism and complaints.

“Many asked why would he do such a thing…. But the answer to that motivation and I believe the answer to many things he did can be found in the first reading we heard today, from Paul’s letter to the Corinthians: ‘Thus I do not run aimlessly; I do not fight as if I were shadowboxing. No, I drive my body and I train it, for fear that, after having preached to others, I myself should be disqualified.’”

Longtime friend Steve Girard shared a reflection on his relationship with Msgr. Madden, which began with a chance encounter in jail in 1959. “He was there to visit somebody else and he happened to walk by my cell and he started a conversation with me. This lasted for 57 years,” Girard said.

Girard shared how Msgr. Madden supported him after his release, finding him a home with his own brother and sister-in-law, visiting him during college, remaining close with him and his family as his engineering career took them around the country.

“At Christmastime, you probably have all seen [the movie ‘It’s] a Wonderful Life,’ how one person can affect the lives of so many. Father John was a mentor and he encouraged me and made my life what it was…. And [from] what I’ve heard, he’s affected so many lives. Father John, you may be gone but certainly you will not be forgotten by all the people whose lives you touched, and certainly not by me,” Girard said.