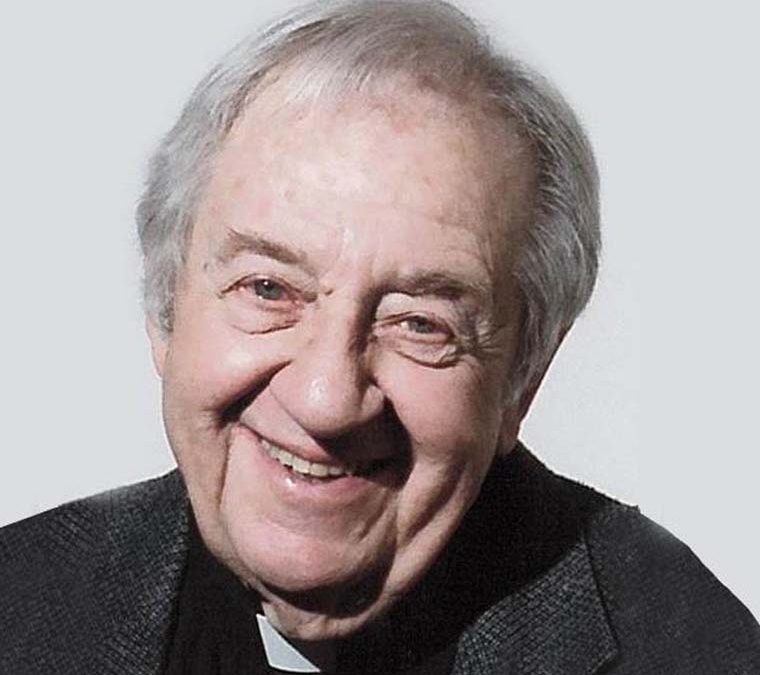 UTICA — There was an assortment of items on a little table awaiting the offertory at Utica College’s Newman Center May 27. Some were a bit odd given the setting — the funeral Mass for a beloved diocesan priest. But for those who knew Father V. James Lauducci, nothing on that table below the natural wood ceiling beams of the Newman Center chapel was a surprise.

Implements Father Lauducci used for Holy Eucharist, like his paten and cruet, were in the forefront. Standing up at the back of the display was a resolution from Utica College in his honor. In the middle were well-loved copies of the books The Holy Longing by Oblate Father Ronald Rolheiser, a two-book set of the Great Religions of the World, and Italian Cooking by Robin Howe. A plastic toy boat perched alongside it all.

These items reflect the impact Father Lauducci had on the people around him. He was a spiritual guide, a teacher, a host, and a chef, among many other things. The toy boat and the other items on the table were not met with curiosity by anyone in attendance, but rather with small knowing smiles.

Father Charles M. Major, retired pastor of St. Joseph the Worker in Liverpool, delivered the homily at the funeral Mass. He began by saying the early Christian writer Irenaeus described a Christian as a person who is fully alive. “Jim was fully alive and touched our lives,” he noted.

His home, a camp on Cayuta (sometimes spelled Kayuta) Lake just North of Utica, became a comfort for many, whether they be family, friends, colleagues, or retreat participants. Father Major commented, “Many of us in many ways have benefited from Jim’s spirit, but also Jim’s kitchen … and what a gift to be fed not merely in your body but in your mind and spirit.… We recognize that if they needed a chef in the heavenly kingdom, they picked a good one.”

While his early assignments brought him to St. Mary of the Assumption Parish in Binghamton and St. Cecilia’s Parish in Solvay, he spent the majority of his ministry in the Eastern Region of the Syracuse Diocese. He retired in 1999 from the Newman Center at Utica College and SUNY IT after 33 years of service.

Father Major said he and Father Lauducci took classes together at Le Moyne College. “He was a smart person, almost as smart as God… and he took great notes,” Father Major recalled.

Father Major told the story of how Bishop Walter A. Foery assembled four diocesan priests, including himself and Father Lauducci, to ask what they thought of his idea to open Catholic schools and have the priests work in them. The idea was not well-received, he said with a laugh. But Father Lauducci indeed went on to become a great educator. “[Jim] became a leader in so many ways,” said Father Major, noting that Father Lauducci was even instrumental in establishing the football program at Rome Catholic High School while teaching there and serving as athletic director.

“He was an unusually talented man … I was touched by so many of his reflections,” said Father Major, who asked those in attendance to recite the prayer written by Father Lauducci and printed in the program. It read, “Spirit within us, may we feel and touch you as you feel and touch us. May your glory that blossoms in the flowers shower the earth, may your glory painted on the moon raise to the heights of your creation to be seen in our eyes, felt in our hearts, echoed in our speech and lived in a Christian manner keeping us constantly in touch with you.”

“He touched all of us as an educator throughout his life and, of course, through the pulpit,” Father Major said.