Getting to know Bishop-elect Lucia 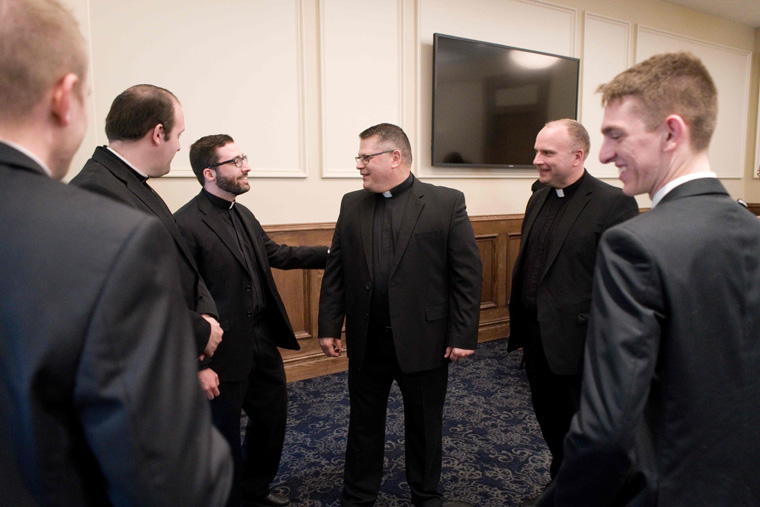 At the tail-end of a day that included a press conference announcing his appointment as bishop, concelebration of Mass at the Cathedral of the Immaculate Conception, and visiting the Catholic Charities Men’s Shelter and the Basilica of the Sacred Heart of Jesus, Bishop-elect Douglas J. Lucia made time to talk with the Catholic Sun. Here are some highlights from that conversation.

In his remarks at the morning press conference, Bishop-elect Lucia called his parents the “first teachers in the faith” for him and his siblings. Who is the Lucia family and how did they help the bishop-elect on his path to priesthood?

Bishop-elect Lucia is the son of Leward and Betty Lucia, who are both in their 90s. He has three siblings: identical twin brother David, younger sister Ann Chauvin, and younger brother Paul. He also has four nieces and nephews: David and wife Laurie are the parents of two sons, Adam and Nick; Paul and wife Krista are the parents of two daughters, Ashley and Brittany.

Bishop-elect Lucia was the second of the twins to be born. “I was the surprise package,” he laughed. “They didn’t know…. My mother went back into labor and she couldn’t figure out why!”

The Lucia family always went to 8 a.m. Mass on Sunday at Holy Angels Church in his hometown of Altona, prayed at home, and the children attended religious education through 12th grade, he said. 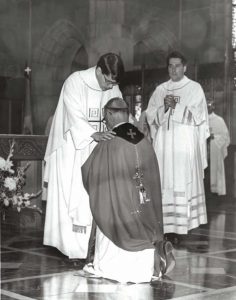 The first inklings of a vocation to the priesthood may have come early: “The priest who baptized us told my parents, ‘One of these boys is going to be a priest,’” the bishop-elect recalled.

When he expressed an interest in the priesthood, his parents never discouraged him — in fact, “I would play Mass, and my mother actually made me the little vestments,” he said.

Bishop-elect Lucia eventually entered seminary — and “I wasn’t too sure about this priest thing, to be honest with you. In fact, I had pretty much decided I was going to leave and become a lawyer,” he said. But then, “I was working in a soup kitchen and just came to realize no, the Lord wants me to be a priest and that’s why I’m here today.”

Bishop-elect Lucia has served in many capacities since his ordination in 1989. He currently serves as the pastor of two parishes — St. Mary’s in Waddington and St. John the Baptist in Madrid — and as the judicial vicar, director of vocations, and director of seminarians for the Diocese of Ogdensburg. What do those ministries entail?

The judicial vicar “is the chief legal officer of the Church for canonical affairs, for anything pertaining to the canon law of the Church. In secular terms, we would say he’s ‘the judicial branch,’” Bishop-elect Lucia explained. Day to day, this means helping people through the annulment process, ensuring all canonical processes for church mergers and closures are followed properly, and serving as the one who, in the name of the bishop, is responsible for the canonical process in the imposition of penalties in cases involving clergy and minors/vulnerable adults.

In his work with vocations and seminarians, “I do vocations talks, discernment weekends, and right now Ogdensburg is blessed to have 12 seminarians; a lot of it is working with current seminarians.” 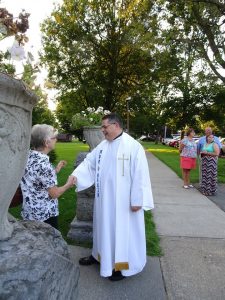 In his remarks at the morning press conference and at the midday Mass, Bishop-elect Lucia said his appointment as bishop came as a total surprise. How did that fateful call go?

“I got in from doing two Memorial Day Masses and I had forgotten my cell phone. I looked at my cell phone and, lo and behold, I had two calls from Washington,” he said.

He recalled Bishop of Ogdensburg Terry LaValley receiving a call from Washington the day before. “I sent him a quick note and I said, ‘I have two calls from Washington. Do you know anything about this?’ And I get back, in big bold letters, from the bishop, ‘MAKE THE CALL.’

“I made the call and Archbishop [Christophe] Pierre [Vatican nuncio to the U.S.] answered,” he said. After some small talk, the nuncio said, “‘I have some news for you…. The Holy Father would like you to be the next Bishop of Syracuse.’ And of course I was just totally shocked.”

Bishop-elect Lucia knows a bit about the Diocese of Syracuse and some of its clergy through his time in seminary and his work in canon law and in vocations. He made time during his visit to Syracuse, however, to see two Catholic institutions up close: the Catholic Charities Men’s Shelter and the Basilica of the Sacred Heart of Jesus. Why did he want to visit these sites in particular?

“I know the economy, I know what northern New York, Upstate New York, can be as far as people in need. I really wanted to make sure that I saw Catholic Charities. From the get-go, I wanted to be able to connect and know faces because I think that’s really one of the most important works of the Church — reaching out to those who are most in need.”

On a more personal note, the basilica’s rector, Father Andrew Baranski, is an old friend of the bishop-elect; both served as bishops’ secretaries in their respective dioceses.

“You need to approach things calmly,” Bishop-elect Lucia said. “You need to take a step back, look at it, evaluate it, and then make your decision…. Probably the common way of saying it? No knee-jerk reactions.” 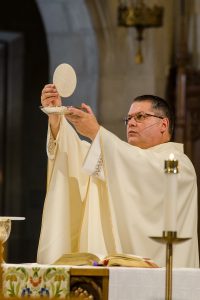 What does he see as the role of a bishop?

“I always see the bishop as a pastor,” Bishop-elect Lucia said. As a pastor, he always felt three things were important: “I needed to build community, I needed to nurture faith lives, and I needed to teach.” The bishop-elect said those goals are achieved through prayer and catechesis.

Bishop-elect Lucia said one of his priorities will be going out to visit folks in their parishes. How much time does he envision spending in parishes?

The bishop-elect cited a goal based on an experience from his service in Canada: “The bishop would go and actually spend an entire weekend with a parish community, and just visit the different groupings and say the different Masses and just talk with the folks. I always admired that.”

What is his approach to the ongoing crisis of clergy sexual abuse in the Church?

“For me the most important thing is that victims should know that the Church is there for them. They shouldn’t feel like they’re jumping through hoops,” he said.

The bishop-elect emphasized wanting to meet victims “where they’re at, with a willingness to accompany them. I just think that’s so important.”

What is his approach to the ongoing process of parish reconfiguration?

Bishop-elect Lucia can speak about reconfiguration from personal experience: his home parish has gone through at least three reconfigurations in his lifetime, he said, “so I recognize, in a certain sense, the feelings and the sensitivities that are there.”

When it comes to reconfiguring parishes, “you trust the homework is being done, you trust that the plans presented have been vetted, as they say…. but on the other hand, though, I can honestly understand how people would feel about losing their church.”

While he advises being sensitive and going cautiously, Bishop-elect Lucia is not saying churches shouldn’t close. He feels there “needs to be education, consultation” and notes, “I’m one for building consensus.”

What is his message to the people of the Diocese of Syracuse?

“I’m really excited to get to know them and to be with them.”

A few of Bishop-elect Lucia’s favorites: