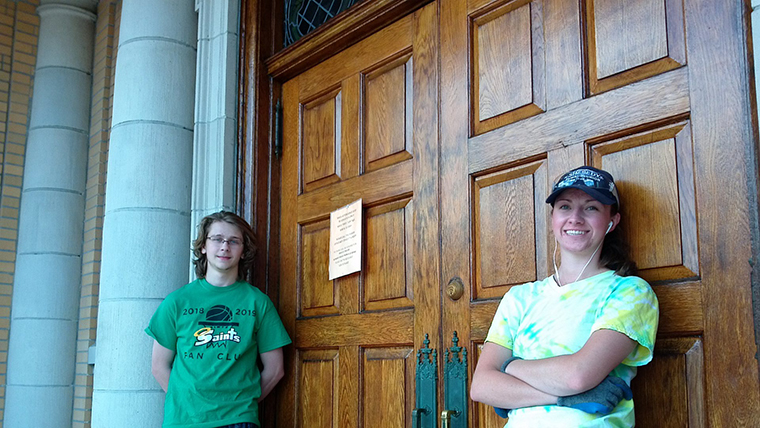 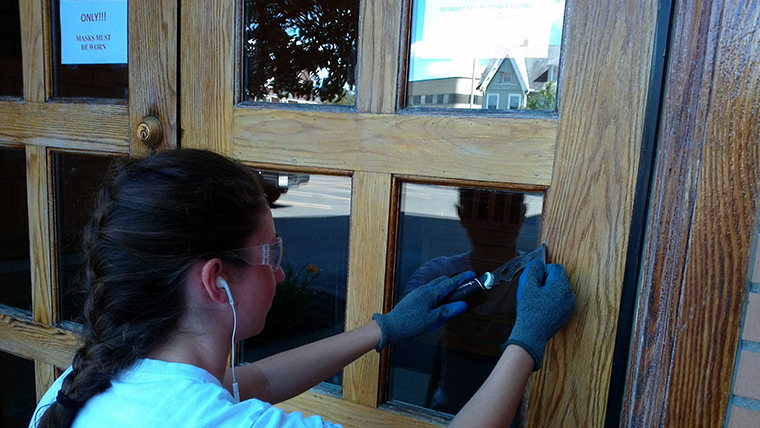 JOHNSON CITY — On a recent morning, Emily Gibson was meticulously hand-sanding a side door at St. James Church.

“I had already done all the front three doors, so yesterday I sanded down this door,” Gibson said, “but this door has a little more wear, so I’m getting the old paint off the corners.”

Gibson is a lifelong parishioner who has done a lot to keep up the place in the last few years. She attended St. James for part of her schooling. During summer vacations while she was in middle and high schools, she volunteered her time at the church.

She was later offered the job of sacristan. That’s not too far from the family tree. She used to tag along when her grandfather Paul Sheredy was sacristan.

“When I was young I used to go and I would help him set up for Mass,” Gibson said.

“Once my grandpa was getting a little bit too old to keep up with things my cousin, Brendan Foley, who was just ordained a transitional deacon, became sacristan,“ Gibson said. “So I would hang out with him and I knew everything.”

Gibson said that put her in line to take over when another sacristan left.

Now a student at the Binghamton University pharmacy school just a couple of blocks away, Gibson can’t stay all day at the church. She’s also working at CVS. The health field interests her and for now she’s looking to do something in the pharmacy.

St. James pastor Father Charles Opondo-Owora is pleased with the work done by Gibson and Garrett Kreeger, another college student with deep roots in the parish. Father Opondo-Owora invited the Sun to stop by and meet the pair at work.

Kreeger’s family has been at the parish about a dozen years. He’s in his fifth year working at the church with a variety of tasks: “from fixing the bell tower, to cleaning classrooms, to cleaning Owens Hall.”

He attended St. James School and now sees behind the scenes each summer.

“It’s a lot more of a learning experience than you would think. Nowadays most teenagers just work in a grocery store and things like that,” Kreeger said.

“But I get to learn about really just anything under the sun. Plumbing, fixing toilets, electrical stuff. It’s really just a great experience.”

He went back to work June 1 with some changes.

“Having to go through the church and make sure everything is socially distant, like having to put ropes up, it’s a little strange, “Kreeger said. “Something I’m definitely not used to and obviously no one else is.”

Kreeger graduated from Seton Catholic Central in 2019 and is looking to get a degree in computer science. This summer he did an internship in computer programming at Southern Tier Technologies.

Gibson said the job at St. James has been a learning experience.

“I went home and I was painting at the house and I learned that here. I would say it’s a really good opportunity to learn a few things and do something useful for your parish,” she added.

Gibson would like to see young people help out at the parish.

“I feel that churches get smaller and smaller and I wish more youth would get involved in different ways and see God in other places. That would be good,” Gibson said.

“Everyone says being involved really helps you understand,” said Kreeger.

“To see how everything is done,” he said, “you really get to learn a lot not only about maintenance, but about church and the faith.”

Deacon Tom Picciano is the deacon administrator of St. John the Evangelist Church in Bainbridge and St. Agnes Mission in Afton; he also serves as pastoral care associate at St. Vincent de Paul Blessed Sacrament Parish in Vestal. He has been writing for the Catholic Sun for 21 years.