Glorious and gratis: half a million rosaries 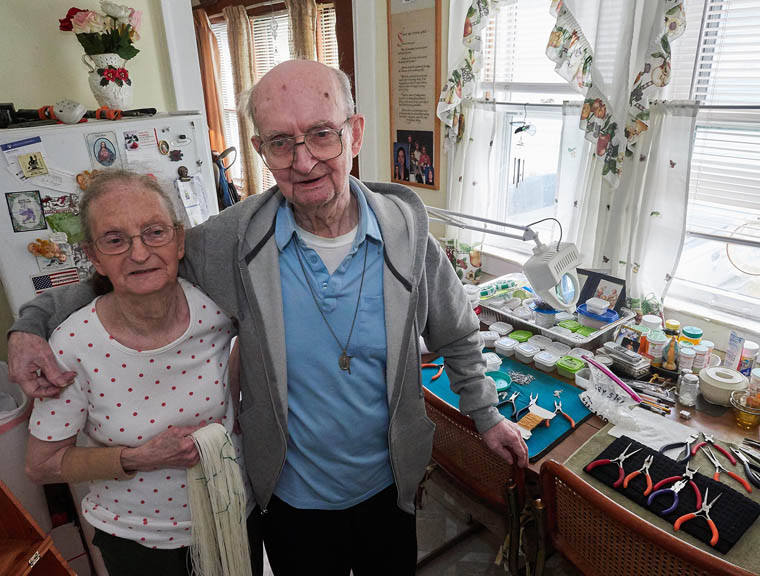 The silent angel appeared to the inspired talker with a message that he interpreted thus: Do something.

The result, so far, is about 500,000 rosaries created by Alice and Nelson Kirkpatrick of Syracuse.

“I don’t think I would have done it without that dream,” Nelson said of his 2005 vision. The retired carpenter always seems to construct a deft answer to deep questions, and he talks while he works. And he never stops working on rosaries: “I’ll make ’em till I die.” 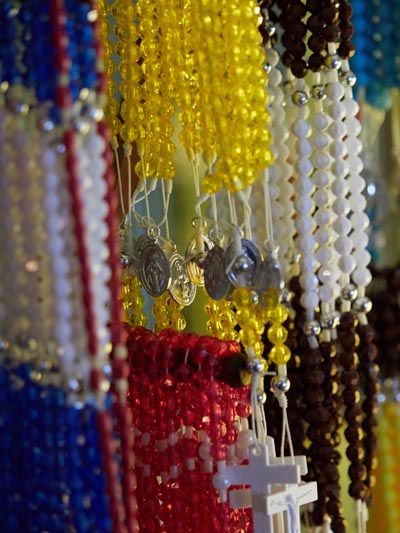 On Feb. 1, 2009, came another dream in which Nelson saw a spider web hanging in a vineyard. His journal explains: “I took this to mean that we have many rosaries to make for Our Mother. Amen.”

The dream dovetails with a piece of machinery that the Kirkpatricks use: Like a spider spinning a web, the pegged arms of a windmill-like device collect nylon cord from a spool until enough cord for 20 rosaries is gathered. That wasn’t the only thing that was spinning on a recent day. Alice looked at an awed visitor and said, correctly, “Your brain is going round and round, I would betcha.”

After gathering the white cord, the Kirkpatricks dunk it in shellac, which primes the cord for the easy loading of the plastic beads. On a rack in the basement sat 340 gleaming cords, drying. “That’s just a start,” Nelson said. “I do a whole row. That’ll be gone the next time I’m down here.”

In the living room, a plastic cabinet for the beads stands almost as tall as Nelson. “Oh, you’ve haven’t seen the other room,” he said. In the other room were four medium-height containers of smooth and crystalline beads. If there is any light at all in a room, the rosaries will catch it and sparkle. For the Irish, the rosaries are green, white, and orange; for Italians, green, white, and red. “You make up your own combination. … And we don’t charge for them,” Nelson said.

Asked how he can make hundreds of thousands of rosaries for free, Nelson was as firm as one of the four to six nail knots that he puts on every rosary: “Let me ask you a question: Did your mother charge you for her love?”

“Neither does Our Blessed Mother charge for her love.”

The Kirkpatricks’ other sayings include “When you see a rose, say a rosary” and “Anytime you say the rosary, a soul is saved.”

At their home, multicolored rosaries hang on hat racks in clusters of 10; they fill cardboard boxes, waiting to be shipped out. The rosaries have almost a Franciscan feel, with the little clumps of nail knots on each one. They are also adorned with a plastic crucifix, a miraculous medal, and a centerpiece.

Sometimes Alice and Nelson switch from making cord rosaries to making chain rosaries. The beads are made of olivewood from Jerusalem.

The Kirkpatricks do not find the work at all tedious, Nelson said, “because it’s made out of love. … What more love do you need? You feel joy, you feel happy; you don’t want to stop.”

They never do. Alice and Nelson combine for about 100 rosaries per week these days. The creations go to places including local hospitals, South Carolina, Florida, Haiti, and Africa. Sister Joana Baidoo, IHMMC, who works with immigrants and refugee families at St. Vincent de Paul Church in Syracuse, said the Kirkpatricks have helped her ship rosaries to Ghana and Nigeria.

“They are very dedicated people who cheerfully and generously give out rosaries to people and … are equally glad when people ask them for more rosaries,” Sister Joana said.

Tom Anderson, the lay Catholic chaplain at Crouse Hospital, said in an email, “Alice and Nelson share in a ministry that touches countless people here in ways they cannot begin to imagine. Through their devotion to Mary, they bring a message of peace and comfort: that patients, family and friends, and staff are loved by their Lord, who is present to them in their time of need. Many people have been called to a renewal or deepening of their faith and relationship with the Lord through Alice and Nelson’s ministry. They are beautiful witnesses of their faith and I am grateful for all they do for Crouse.”

The Kirkpatricks teach rosary-making at the CNY Marian Center in North Syracuse, and they also meet weekly to make rosaries with the nuns at the Franciscan Villa in Liverpool. The rosaries go fast, and the Kirkpatricks could use volunteers. They ask anyone who is interested in making rosaries to call or email the Marian Center at 315-452-4698 or mariancenter.cny@gmail.com.

Regina Harty, a volunteer and board member at the Marian Center, said, “Their devotion to Jesus and Mary is an inspiration. … That devotion shows in every single room” of their home.

Dr. Pat Iannolo, founder of the Marian Center, said, “The Kirkpatricks are two of the most humble people I have ever encountered in all my years of affiliation with the CNY Marian Center. Their devotion to the Blessed Mother is fabulous and the work they have done in spreading rosaries around the world is truly spectacular.”

For 10 years, Father Peter E. Reddick, pastor of Blessed Sacrament Church in Syracuse, has visited the Kirkpatricks periodically to sprinkle holy water on “everything I can … everything in sight. I bring a bottle of it, that’s for sure. I have to replenish it when I get done.”

He recalled seeing a huge drum filled with Africa-bound rosaries in the middle of the living room. “My jaw dropped,” Father Reddick said.

He said he can’t imagine there would be “beads enough in the world to form the rosaries they’ve made over the years — just unbelievable. … The word which would be appropriate but understated is ‘prolific.’”

Actually, as Nelson recalled it, there were three drums filled with rosaries and other items when Father Reddick visited. The Kirkpatricks also make sets, with a necklace and bracelet.

“He’s a sweetheart anyway,” Alice said of Father Reddick; she remembers his pastorship at St. Patrick’s in Syracuse.

Asked how much good Alice and he have done by making half a million rosaries, Nelson said: “Peace on earth to men of goodwill — that would be fine enough.” He recalls making a gold rosary for a friend. “She says, ‘Oh, it is true — I was told that when I receive a gold rosary, I will know my mother is in heaven.’ She was so happy. I was very surprised. That really shook me.”

Nelson says a prayer before he makes rosaries; it gives him the strength and encouragement to make them for the people who want them.

Asked what he says after making a rosary, he responded: