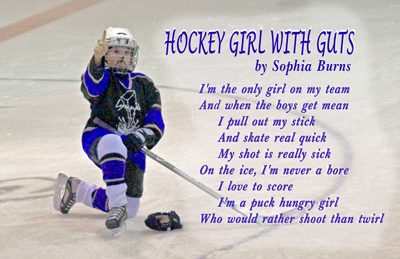 Sophia has won a number of contests over the last few years. Her mother, Christie Burns, said she is very proud of her daughter. “I have to give a lot of credit to her school community,” she said. “Strong moral values and the importance of helping other people are taught in her school and that is reflected in her writing and artwork.”

Last November, Sophia submitted her poem, “Hockey Girl With Guts” to Scholastic Book Club’s Funny Me! Poetry Contest. She was selected as one of ten winners from across the country. “I was surprised and happy that I won,” said Sophia.

She said that when she entered the contest she wanted to show how funny she could be. She wrote the poem to encourage girls to stand up for themselves.

“She has such a great sense of humor,” said Sophia’s mother. “She uses that to send good messages to others.”

As a winner, Sophia received a 10-book Humor Library and a collection of silly gags from Scholastic Book Club.

Sophia was inspired by her personal experience as a hockey player when she wrote the poem. As the only girl on her team, she would frequently feel the boys pulling on her long hair.

Last January, Sophia’s team placed second in the Brockville Hockey Tournament in Canada and Sophia was named Most Valuable Player. The coach from the opposing team said that Sophia exhibited good sportsmanship and a nice attitude.

Sophia’s classroom teacher, Mary Burkette, encouraged the rest of Sophia’s classmates to enter their poetry in the contest, as she does with her class every year. The judges determined that every one of her students’ poems would be published in the book, Anthology of Poetry by Young Americans. “I’m proud that they all made it,” said Burkette.

Last May, Sophia learned that she was one of two first place winners in the third/fourth grade category of the 2010 Rite Aid T-shirt Contest. The contest challenged students in grades 3 to 8 to express their rejection of drugs by creating a drawing that conveys a powerful prevention message.

Sophia decided to enter the contest because she thought it would be a “fun way to encourage kids not to do drugs.” Her drawing of a hand with children playing around the outside of it was displayed in the school hallway. “They [students] congratulated me and were very nice to me,” said Sophia.

Sophia was also a winner of the Onondaga County Children’s Dental Health Month Creative Contest. She used her artistic ability to design a drawing of a hockey player who had messages written on his uniform. The messages conveyed the importance of brushing one’s teeth and to also use the proper mouth gear to protect one’s teeth when playing hockey.

Sophia won the 2009 “Clear Minds, Clear Messages” contest with a drawing that she entered in the overall drug division. “It felt awesome,” said Sophia.

The contest is sponsored by the Syracuse/Onondaga Drug and Alcohol Abuse Commission and is open to students throughout Onondaga County. It provides them with the opportunity to create their own anti-drug media messages.

Sophia’s creation has been professionally produced into a 2010 calendar.

The drawing, which appears in the month of November, is a picture of a large hand. Two young people are conversing with one another. One is saying, “Talk to the hand — it doesn’t do drugs. The other is saying, “The hand is very cool.” The hand, which has a happy face drawn on it, has components written on each finger. The components are good grades, music, sports, family and good fun/friends.

Sophia said she counts the influence of her teacher, along with her family, as  the catalysts for her many achievements. “I couldn’t ask for a better teacher,” said Sophia. “I have good parents who have raised me well. I’m lucky to have a good life.”