It was a scramble for Catholic schools.

Ninety golfers competed June 20 to support scholarships for the 21 diocesan Catholic schools. The Light a Child’s Future Syracuse Diocese Catholic Schools Charity Golf Tournament was held at Shenendoah Golf Club at Turning Stone in Verona. In the captain-and-crew format, all the golfers on a team hit a ball and then they all play their next shot from the point where the best shot landed; they keep that up until the ball is holed.

“It’s just a fun day to get out and support Catholic school education,” said golfer William Crist, the diocesan superintendent of schools.

“Almighty God, we first thank you for such a beautiful day, the wonderful support of so many people to support the young people of our diocese and our schools,” retired Monsignor James O’Brien said in his opening prayer. “We pray that we will always be thoughtful and caring of those in need, and always thoughtful as we even play today, of those that we are supporting.” 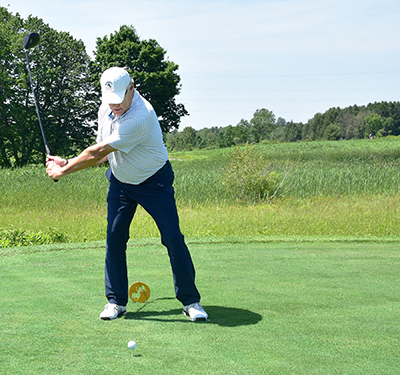 Deacon Greg Cross gets ready to hit a drive; his day included a hole in one. He said nothing would stop him from supporting the fundraiser for Catholic schools.

Participant Phil McGarvey will be a junior in the fall at Bishop Ludden. His Gaelic Knights golf team just won the sectional championship for small schools.

Attending a Catholic school, he said, has taught him the “important values and how to put them forth in everyday life, and how to live a Catholic life and live a life that is very meaningful. … I think that the experiences you have are special and not like anything else you can get. … You know everyone in your class by name. … You can say hello to any teacher and they’ll strike up a conversation.”

Asked how he would instruct an incoming class at Ludden in the game of golf, he said: “You have to be patient. You have to be willing to be bad [at first]. … It doesn’t come natural at all. You have to be willing to put in the hours, you gotta be accepting of all criticism. You gotta be accepting of advice. You gotta find the people who you think will help you get your game to the next level. But most of all, be patient with it. It will come eventually. And stick with it.”

He has even gotten involved in performing arts at Ludden, where teacher Tom Pietropaolo (“Mr. P”) is one of the legends. “I’m in Global taking his class,” McGarvey said, “so I have him in class, then you go see him at play. … He’s a great guy.”

McGarvey was on the winning foursome that carded a 16-under-par score of 56. His partners included Michael Bucko, who just graduated from Seton Catholic Central in Binghamton. Bucko had the longest drive for men, measured on Hole 10. (Also measured on No. 10, the longest drive by a woman was by Chelsea Giovo of the Burritt Motors, Oswego, team.)

Bucko also made a putt of about 31 feet on one hole. He next will study business and play golf at St. Bonaventure University. Completing the winning foursome were Bishop Grimes grad Anthony Falgiatano, on the golf team at Le Moyne College where he will be a junior studying history, and Vincent Falgiatano, who just graduated from Grimes and next will study sports entertainment management and play golf at Nazareth College.

Deacon Cross carded his hole in one on the third hole. He wore socks bearing a photo of Payne Stewart winning the U.S. Open in 1999 at Pinehurst No. 2 in North Carolina.

“The spirit of Payne Stewart was upon me,” the deacon said.

“That’s what did it,” his playing partner retired Deacon Guy Hart said of the Stewart socks.

“I put the peg in the ground,” he explained. “I put the ball on the peg. I swung at it with my club and the ball went in the hole.”

Deacon Cross formerly was director of deacon personnel for the Diocese of Syracuse. He and his wife, Bunny, relocated three years ago to Pinehurst, N.C., where he is assigned by Diocese of Raleigh Bishop Luis Rafael Zarama to Sacred Heart Church. He is starting up a Society of St. Vincent de Paul chapter, and his parish serves several nursing homes in the area.

Monday’s hole in one was his second; his first came just after he graduated from college. He said he hit a Maxfli golf ball with a 7-iron on a 165-yard hole at Cataraqui Golf & Country Club in Kingston, Ontario.

“I still remember it vaguely,” he said.