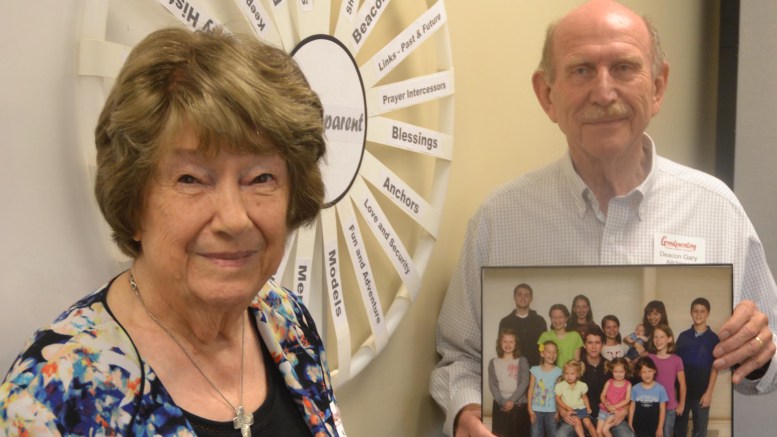 Deacon Gary Aitchison and his wife, Kay, pose Aug. 25 with a photo of their grandchildren. The couple spoke about a ministry for grandparents they started at St. Cecilia Parish in Ames, Iowa, during a conference called “Grandparenting: Leaving a Legacy of Faith,” at St. Mary Church in Waverly. -CNS photo | Dan Russo, The Witness

WAVERLY, Iowa (CNS) — Now more than ever, grandparents have an essential role in their families, particularly when it comes to passing on the faith to future generations.

“We had to realize that while society doesn’t value grandparents, God does,” said Crystal Crocker, to a group of about 120 people at St. Mary Church in Waverly. “You’re needed. You still have a job to do.”

Crocker, director of the Office of Evangelization for the Archdiocese of St. Paul and Minneapolis, was the keynote speaker at a daylong conference Aug. 25 called “Grandparenting: Leaving a Legacy of Faith” — the first event of its kind in the Archdiocese of Dubuque.

Crocker is known for spearheading one of the first diocesan ministries in the nation focused on grandparents. She realized it was necessary to reach out to the elder members of the church because of the unique wisdom they can provide their families.

“You have to be a spiritual grandparent,” urged Crocker. “Our goal is to get our children and grandchildren to heaven.”

She spoke to the conference participants in the morning and afternoon on God’s call to grandparents and on passing on a legacy of faith.

The day also featured Mass with Dubuque Archbishop Michael O. Jackels and three breakout sessions that focused on tough questions facing grandparents such as: What do you do if your adult children have stopped practicing their faith?

Deacon Gary and Kay Aitchison, two pioneers in grandparenting ministry in the archdiocese, were joined by other archdiocesan church leaders: Mary Pedersen, director of Adult Faith Formation, and Matt Selby, director of the Office of Marriage and Family Life, in leading breakout sessions. The Aitchisons have written a six-session small group program for grandparents called “The Grand Adventure: A New Call to Grandparenting,” based on their experience with the Christian Family Movement.

“Fifty-four percent of Americans over 50 are grandparents,” said Deacon Aitchison.

“We like to think that grandparents are blessings and anchors to our grandchildren,” his wife added.

In his homily, Archbishop Jackels shared some of his own experiences with family members who are not practicing the faith, saying that he could identify with many at the conference as one of six children who were raised Catholic.

“I’m the only one who still goes to church,” he said.

He encouraged people to show people the truth and power of Jesus’ love by their own actions.

“The wagging finger doesn’t work so well with adult children,” said the archbishop. “The most effective thing is the example, the imitation of Christ.”

Some of the attendees, like Jill and Dean Rowell of St. Isidore Parish in Springville, were brand new grandparents.

“We have a 3-month-old grandson,” said Jill. “Our son did have his baby baptized, but they aren’t actively attending Mass, so we’re hoping to hear some ideas on how to encourage him and our grandson in faith and knowing God.”

During his session, Selby, a convert to Catholicism from evangelical Protestantism, offered guidance on reaching out to adult children and other family members.

“Don’t blame yourself,” said Selby. “There’s free will involved. You’ve got to recognize their free will and don’t beat yourself up.”

He and Crocker offered several practical “do’s and don’ts,” when reaching out to adult children and other family members who are not practicing their faith.

Both speakers emphasized the importance of prayer, fasting and sacrificing for children and grandchildren. They also offered this tip: Let parents be parents.

“Let the parents discipline and you can come in and be the consoler,” said Crocker. “Understand that it’s tough to be a parent. You can continue to influence, but you no longer have control. We can’t change people. God can change them.”