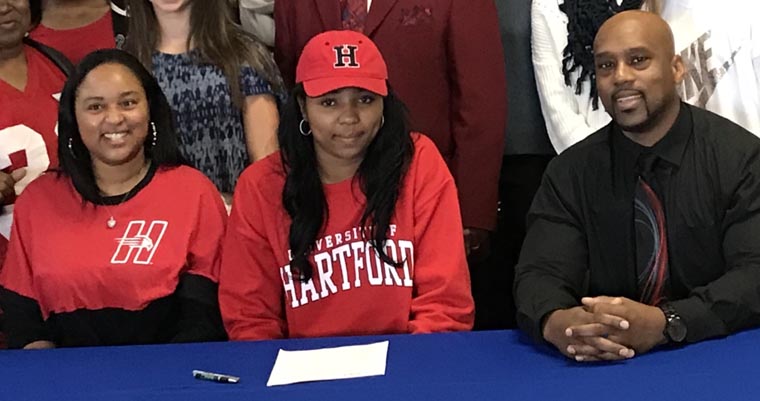 “She just comes out of nowhere,” Squier explained, “and it’s like: ‘Oh, well, that’s not in my hand anymore.’”

The six-foot Wade’s madness for rebounds has helped land her a spot on the Division I University of Hartford basketball team next season. Last week she signed her National Letter of Intent with her parents at her side.

“Azariah is the perfect fit for our program both academically and athletically. She is an explosive player that is very versatile and can impact the game on both ends of the floor. Her versatility will allow her to play several positions in our system. I’m excited about the impact that Azariah can have on our team.”

“I chose Hartford,” Wade said, “because when I walked on campus I was greeted by the amazing coaching staff; the girls were nice, they’re amazing, and I just fit in well. I knew that if I went there I would be welcome, I would be accepted, and I would be able to continue my basketball experience.”

“She’s the best player I’ve ever coached, by far,” Grimes Girls Basketball Coach John Cifonelli said. “By far, yeah, absolutely. Because she possesses physical tools that very few kids have. And you combine that with the fact that she just has an incredible desire to learn, and to be coached, and to want to get better every time she’s on the court.”

In last season’s sectional final, Bishop Ludden topped Grimes. Wade scored 10 points despite playing with a severely sprained shooting wrist and with a face guard for her broken nose — “a shell of herself physically in that game,” Coach Cifonelli said.

He added: “I wish everyone could have seen her at full health. How the game would have changed, who knows, and you tip your hat to how Ludden played that day. But for her it would have been nice for her to show the whole package on that stage.”

Going into her Hartford career Wade will be fine, but she will miss her senior season at Grimes because she tore a knee ligament trying out for a summer all-star team.

Last season Wade was named to the All-CNY Small Schools first team, and to the all-state third team for Class B. She is also a three-time Liberty Conference all-star. Her career numbers for the Lady Cobras are 1,570 points (the Cobras’ all-time record, for boys or girls, Coach Cifonelli said) and 1,444 rebounds. Grimes has no official records for rebounds, but the coach can’t imagine that anyone else is even in that ballpark.

“You don’t get those numbers by taking plays off,” Coach Cifonelli said, “or by saying, ‘Ah, let somebody else get this rebound.’ You have to really want to win every possession to put up numbers like that.”

Losing Wade for the season is tough, he said, “but we will redefine ourselves and find a way to be competitive again. We have good kids who are willing to work hard.”

Those kids include Squier, who suggested, “I should just get half-rebounds. Honestly, we should make that stat.”

A senior like Wade, the five-foot-ten Squier said she will probably attend SUNY Brockport, where she will play basketball. She wants to be a veterinarian, so she will study biology. Her good buddy Wade, whom she nicknamed “Z-Bear,” has not yet decided on a specific area of study. They both came to Grimes as ninth-graders, and they both have a 95 GPA.

“She wants it really bad, so she’ll do well [at Hartford],” said Squier, who sports the nickname “Ginger,” courtesy of Wade.

Coach Cifonelli’s strategy was to put Squier and Wade on opposing teams in practice. “And Bri would say, ‘Well, that’s great — every day you make me go get beat up by her,’ but really what it did is … make both of them better players, because they’re both very, very good players.”

This season, Wade will be helping Coach Cifonelli coach the team. “Just putting some tips out there,” she said, “some advice, like, ‘Hey, you know, you probably missed this because you didn’t go up with your LEFT hand,’ just little stuff like that.”

“Well, I’m actually going to have to try and score this year,” Squier said, “because Azariah’s not playing. I don’t know, it’s weird, because I’ve played with her for so long. I’m used to lobbing the ball to her, and I always know where she’s going to be.”

Wade had knee surgery three months ago, and she will be fully recovered by January or February.

“They cleared me to jog,” she said, “so I said, Ginge, let’s race, but you can only jog. But then she started beating me because she started running, so I dragged her to the floor.”

“She helped me up after,” said her ever loyal teammate.