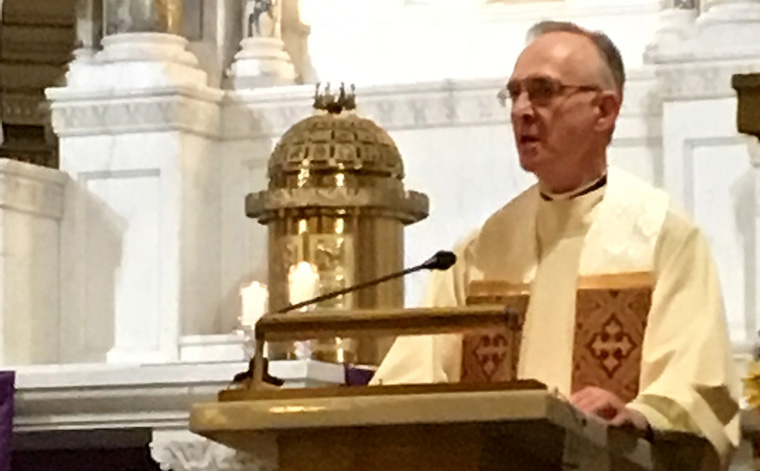 Back in his youth, the late Father Simeon (Daniel) Rukstalis, OFM Conv., could deliver a hit and take one, but only with the best intentions.

Down in Pennsylvania, the big football game was always on Thanksgiving Day: James M. Coughlin High School vs. Kingston High.

Father Simeon’s sister Barbara Hufford recalled what her brother did on Thanksgiving in his senior year: “He broke a player’s leg on the other side. And he went right out and apologized to that kid.”

Hufford, of Kingston, Pa., was among about 60 mourners, including 25 friars, on April 4 at the Franciscan Church of the Assumption in Syracuse. A priest for more than 52 years, Father Simeon died March 27. Father Mark Pasik, the homilist for the funeral Mass, noted that his longtime friend had served in Binghamton; Lambert, Quebec; Puerto Rico; Trenton, N.J.; Utica; Inlet; Raquette Lake; North Carolina; and the Buffalo area.

The football incident may have indicated a special grace in this upbeat Pennsylvanian, but it was not always obvious to his family that he would become a priest.

At the reception in the church hall after the funeral, Hufford, who is one of four sisters who survive from a family of 11 children, told this story:

After high school, Father Simeon went into the Navy. In an accident, a heavy lid came down on his hands. He prayed to God that he would be all right. When he did get home after his Navy service, he spoke to his grandmother, “and he says, ‘I’m going to become a priest.’ My mother smacked him. Because she says, ‘You do not say that if you’re not.’ He says, ‘No … I am.’”

And he followed through, professing Franciscan vows in 1958 and being ordained in 1964.

He had discovered a man who had an “innate calling to the priesthood. … His humor, wit, and wisdom were a combination of an approach that our Lord would take.”

His friend was afflicted with various ailments for many years, Father Pasik said: a broken back in a car accident, diabetes, kidney failure, heart failure, eye surgeries, and infections.

“Could we not speculate that he understood quite well the immobile Christ crucified,” Father Pasik said, “as Father Simeon endured kidney dialysis [for three years] and was reminded not to move for hours during the treatment.”

“Whenever I asked him how he was doing, he’d say, ‘Better than most,’” said the presider at the funeral Mass, Father Brad Milunski, OFM Conv., vicar provincial of Our Lady of the Angels Province.

Father Milunski recalled the moment in 2014 when he called with the news that Father Simeon would be moving from Binghamton to Buffalo. “He said, ‘OK’ [with the emphasis on the “O”]. Then he kept talking about his jubilee.”

Family members recalled Father Simeon’s kind acts toward them. “My brother was this way: He wanted to know what was wrong with YOU,” Hufford said. “But he wouldn’t say what was wrong with him.” She eventually found out that he had had a pacemaker put in.

“And if you needed anything, he would get it without you knowing it,” she said. “I remember one time, well, I didn’t have nine kids then, he came over, he’s carrying these bags in, bags of groceries. I said, ‘What are you doing?’ He says, ‘Never mind.’ And he started putting them away. … He was a very likable person, oh, yeah.”

“Everybody got just real quiet. He reached in his pocket, pulled out his confessional sash, put it around his neck, and he yelled, ‘OK, who’s first?’ And I kind of yelled, ‘Not without a lawyer.’ … He was a real funny guy.”

“If you had a problem he’d listen to you,” said Albert’s twin brother, Allen. “He was there. … When he walked into the room, all the kids went to Father Simeon, went to Uncle Dan. … Very laid back, easygoing.”

Anna Soyka, of Utica, was Father Simeon’s housekeeper at the Franciscan Church of St. George in Utica for eight years. Asked what his best quality was, she said, “He liked to laugh. … And he always tried to give somebody a sermon; they didn’t know it, but he was trying to teach them while he was talking. But he liked to laugh and he always had a joke; and he would dress up at Christmas as Santa Claus, and he would put on the clown suit when they had their summer festivals in Binghamton.”

“Whether it was wearing a clown outfit at a festival or dressing as Santa Claus,” Father Pasik said, “he loved to be a fool for Christ. He was at peace living in the human condition.”

He added: “His supreme moments of satisfaction came during the celebration of the Eucharist at the assisted living center. He was from time to time administering other sacraments at the facility.”