Healing Ukraine ‘by good and by love’ 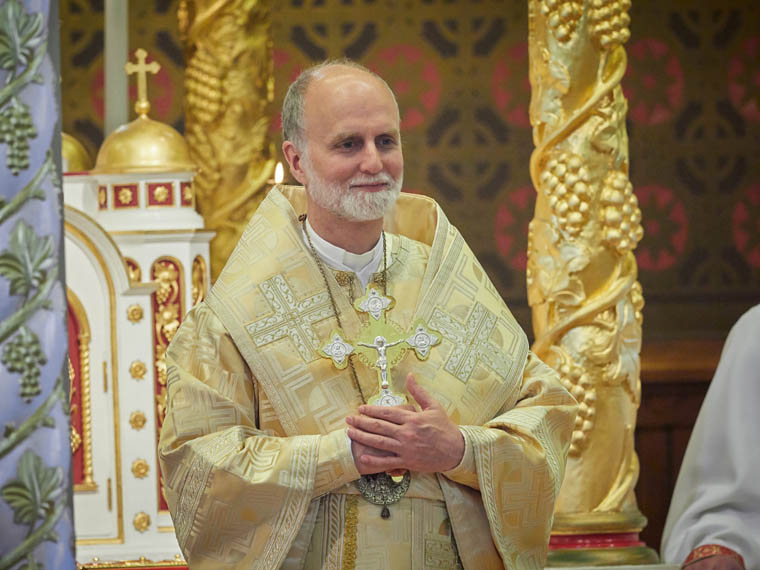 On February 18, 2014, Bishop Borys Gudziak stood among hundreds of thousands of anti-government protesters in Kiev, Ukraine. For three months, demonstrations and clashes with police had intensified over warring visions for Ukraine’s future: affiliation with the European Union or closer ties with Russia. On that momentous day of the uprising known as the Euromaidan or the Revolution of Dignity, Bishop Gudziak, a native of Syracuse who leads the Ukrainian Catholic Diocese of Paris, read a statement to the crowd.

“In God’s name I condemn the violence and the disregard of human rights and of the people’s will,” he read on behalf of the head of the Ukrainian Greek Catholic Church (UGCC), Archbishop Sviatoslav Shevchuk. “To all I say: stop the bloodshed immediately! I call on all the sons and daughters of the Church to fast, pray, and show solidarity with the victims. At this moment, when fratricidal disaster is looming over Ukraine, let the bells ring in all the churches of the UGCC.” 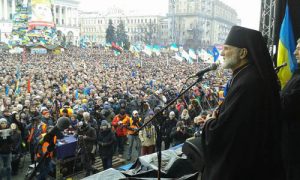 Within three days, more than 100 protesters were killed, including a colleague of the bishop; 13 police officers were also killed and at least 1,300 people were injured. By February 21, Ukrainian President Viktor F. Yanukovych fled Kiev, and early elections were set. For the moment, Western-style democracy had prevailed over corruption and Soviet-style repression.

“They came to sacrifice their life for their principles,” Bishop Gudziak said of the revolution’s martyrs, known as the Heavenly Hundred. During the three-month Euromaidan, he attended the protests several times, praying with the protesters, comforting the injured, and watching as riot police burned the chapel tent he had visited moments earlier. Bishop Gudziak’s public role in the 2014 revolution grew out of a childhood steeped in Ukrainian culture and harrowing accounts of suffering and courage at the hands of Adolf Hitler’s and Josef Stalin’s vicious totalitarianism.

His journey to UGCC leadership began on Syracuse’s West Side, where the Gudziak family attended St. John the Baptist Ukrainian Catholic Church, a parish that dates to 1896. His parents, who immigrated to the United States from Western Ukraine in the 1950s, modeled “allegiance to their culture and their faith.” He described a happy childhood in which he and his brother Marko (a urologist who lives in Michigan) enjoyed excellent education, international travel and parental guidance that mixed discipline and freedom.

In 1968, Syracuse’s Ukrainian community chose Borys Gudziak to greet Ukrainian Cardinal Josyf Slipyj at Hancock Airport. The honor (“I spoke Ukrainian well”) set the stage for his ministry. Cardinal Slipyj (1892-1984) was a hero to Ukraianian Catholics, symbolizing the strength of faith in the face of repression; he was arrested in 1945 and spent 18 years in Soviet work camps, repeatedly refusing to renounce his commitment to the pope. Stalin had outlawed the UGCC, which operated underground for the next 43 years. Cardinal Slipyj was released in 1963.

The 7-year-old Borys was fascinated with the cardinal, then 76 and visiting Syracuse during a tour of North American Ukrainian Catholic communities. The encounter “would change the course of my life,” Bishop Gudziak said. “That was the reason why I ended up in this whole adventure.”

He felt called to the priesthood by age 15. He attended Manlius Pebble Hill and graduated from Christian Brothers Academy, which honored him in 2015 with a Distinguished Alumni Award. He graduated from Syracuse University in 1980, earning a dual degree in philosophy and biology in just two years.

He enrolled in the College of St. Sophia of the Ukrainian Catholic University in Rome, where his mentor inspired him with dreams of creating a Catholic university in Ukraine. Despite his own imprisonment and torture, Cardinal Slipyj remained optimistic about Ukraine’s future, predicting that the Soviet system would fall and the UGCC would re-emerge as a spiritual, cultural and moral force in Ukraine.

Sure enough, in 1991 the Soviet Union collapsed, and Ukraine declared itself independent. By 1993, Gudziak, who was to be ordained a priest in 1998, began work reviving the Lviv Theological Academy. That institution was the precursor to Ukrainian Catholic University (UCU), the only Catholic university in former Soviet territory. UCU graduated its first class — 29 students — in 1999. In 2017, UCU admitted 327 first-year students to 10 bachelor’s programs.

In September 2017, UCU marked 25 years and completed its campus construction plan with consecration of the Metropolitan Andrey Sheptytsky Center. The building, named after the leader of the UGCC from 1901 to 1944, reflects “a cultural victory for Ukraine,” Bishop Gudziak said. “But that moving forward to freedom, to dignity, has been thwarted at different times by different governments.”

Pope Benedict XVI named Gudziak bishop of the Paris Eparchy of Saint Volodymyr the Great, the territorial diocese for the Ukrainian Catholic Church in France, Belgium, Netherlands, Luxemburg, Switzerland and Germany. The UGCC is a Byzantine Rite Eastern Catholic Church in full communion with the Holy See.

Bishop Gudziak, 57, lives in Paris. He is also head of the UGCC’s Department of External Relations and president of UCU, primarily working on the school’s mission and fundraising activities. He speaks and writes frequently on Ukraine and Catholic higher education.

He discussed the revolution and the mission of UCU during a May 8 talk at Syracuse University. He was in town to accept an honorary degree from the university, which praised his “tremendous courage and leadership, helping to reinvigorate a university and faith community and providing a moral center for a country.”

During his lecture and May 6 Divine Liturgy (Mass) at St. John’s, Bishop Gudziak posed for pictures and greeted longtime friends, including two former professors. Before distributing Communion to parishioners — including his 92-year-old mother, Jaroslawa Gudziak — the bishop delivered a short homily with a message for the three girls and two boys who made their First Communion that day.

Children, he told the congregation of about 175, are a sign of the body and blood of the  Lord. In them, “We have the opportunity to live in a fresh and new way,” he said.

His brief comments to the children alluded to the UGCC’s history of persecution and Ukraine’s ongoing war. “We pray for you,” he said. “We pray that you have the chance to be a church. We pray for the purity of your heart. We pray for your peace and security.” 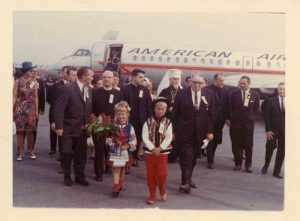 Thomas Bocon, 96, remembers the bishop as “very active in the parish and very friendly. We are proud. Not many people can boast to have a bishop from the parish.”

Bocon came to the United States from Ukraine in 1949 after living in a displaced persons camp. “We knew what was coming,” he said of Communist rule of his homeland. “If you said anything about Stalin you were shot right away. We struggled to get some food to survive. We heard about Russians killing people, so we went to the DP (displaced persons) camp. The camp was a blessing for us.”

In Ukraine “now there is hope. (People) are educated,” he said. “If even one portion of the people became honest servants of Ukraine, Ukraine would become a good place.”

Even after nearly 70 years, he misses Ukraine. “I’m here so many years,” he said, pausing as his eyes filled with tears, “yet I love my country.”

St. John’s pastor, Fr. Mykhaylo Dosyak, also misses his home and family in Ukraine. He’s been in the United States 18 years ago and was named pastor eight years ago.

“It is very hard to see Ukraine struggle from Russian aggression,” he said. “People are worried about what is going to happen tomorrow. We would like to see a free Ukraine, but Russia is Russia. It’s like repeating history.” 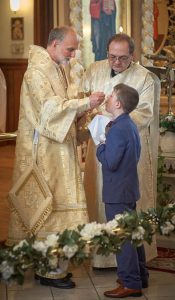 About 150 listened, transfixed, as Bishop Gudziak talked May 8 about Ukraine’s history. At least 12 million people were killed or died unnatural deaths in Ukraine between 1914 and 1960, he said. “Genocide after genocide occurred,” he said. The Holodomor, the Soviet famine of 1932-1933, killed about 4 million people alone. Another 6.8 million — 18 percent of Ukraine’s  population — were killed during World War II.

The trauma, he added, transcends generation. “My conviction is that there is only one way to heal evil, and that is by good and by love,” he said. “And it takes time.”

The Revolution of Dignity and subsequent events have unleashed new trauma, he said. In March 2014, Russia annexed Crimea, in southern Ukraine. War broke out in eastern Ukraine in April 2014; more than 10,000 people have been killed and at least 2 million people displaced.