Helping others realize their potential is good business, pope says 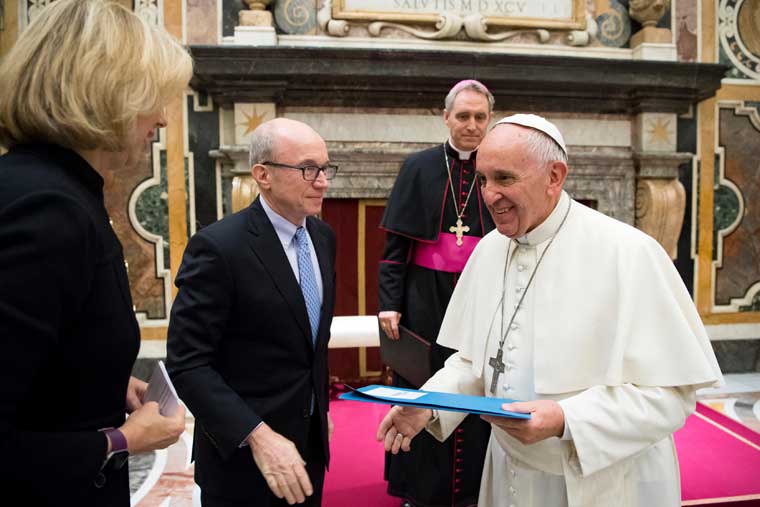 VATICAN CITY (CNS) — Pope Francis pleaded with a group of billionaires to take seriously their personal obligation to share their resources and make a real commitment to doing business in a way that helps other people realize their potential, too.

The global economic system, he said Dec. 3, needs a “fundamental renewal” that “does not have to do simply with market economics, figures to be balanced, the development of raw materials and improvements made to infrastructure.”

“What we are speaking about is the common good of humanity, of the right of each person to share in the resources of this world and to have the same opportunities to realize his or her potential, a potential that is ultimately based on the dignity of the children of God, created in his image and likeness,” the pope told CEOs and other leaders taking part in the Fortune-Time Global Forum.

Business leaders like Virgin’s Richard Branson, LRN’s Dov Seidman, Siemens’ Joe Kaeser and IBM’s Ginni Rometty met in Rome for two days to respond to what they described as Pope Francis’ “passionate pleas for broader prosperity and lasting ways to lift the poor.” They also spoke with concern of growing popular discontent with the way big business and governments operate.

“Populism and protectionism are rearing their heads around the world, and trust in business — as well as other institutions — has plummeted,” the leaders said in their report to the pope.

After public sessions focused on what Branson defined as “moral leadership” — “leadership that accepts that the long-term sustainability of our actions is more important than short-term gain” — the CEOs and heads of major nongovernmental organizations participated in working groups to develop practical commitments aimed at increasing people’s access to finance, health care, the internet, energy, food, clean water, education and job training.

“Our great challenge,” Pope Francis told them, “is to respond to global levels of injustice by promoting a local and even personal sense of responsibility so that no one is excluded from participating in society.”

“The centrality and dignity of the human person,” especially the poor and refugees, must be the key factor in strategizing sustainable development, the pope said.

“When we ignore the cries of so many of our brothers and sisters throughout the world, we not only deny them their God-given rights and worth, but we also reject their wisdom and prevent them from offering their talents, traditions and cultures to the world,” he told the CEOs. “In so doing, the poor and marginalized are made to suffer even more, and we ourselves grow impoverished, not only materially, but morally and spiritually.”

While the CEOs recognized that globalization and digitization “have created unprecedented growth and lifted billions of people out of poverty,” both they and Pope Francis also acknowledged that the growth has been uneven and “inequality within nations is on the rise.”

“People want to make their voices heard and express their concerns and fears,” Pope Francis told the leaders. They want to contribute and “to benefit from the resources and development too often reserved for the few.”

“While this may create conflict and lay bare the many sorrows of our world, it also makes us realize that we are living in a moment of hope. For when we finally recognize the evil in our midst, we can seek healing by applying the remedy,” the pope said.

“Institutional and personal conversion” is the only way forward, he said. “Seek ever more creative ways to transform our institutions and economic structures so that they may be able to respond to the needs of our day and be in service of the human person, especially those marginalized and discarded.”

And that cannot be done from the boardroom, he said. “Involve in your efforts those whom you seek to help; give them a voice, listen to their stories, learn from their experiences and understand their needs. See in them a brother and a sister, a son and a daughter, a mother and a father. Amid the challenges of our day, see the human face of those you earnestly seek to help.”