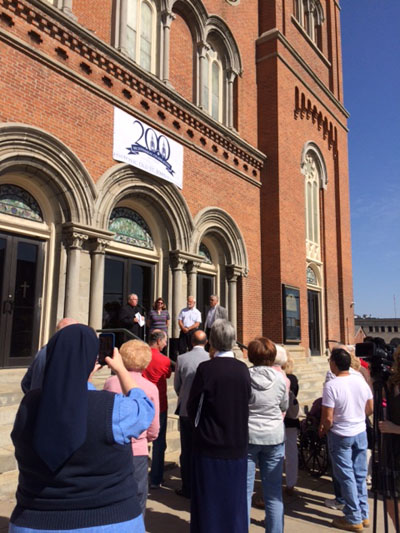 Historic Old St. John Church in Utica began the celebration of its 200th anniversary May 2 with the unveiling of the logo.

Back in 2013, the church held a Restoration Celebration to mark completion of a $1 million redecoration and updating. This year, the church will hold a series of events culminating with a special Mass and Gala on Sunday, Nov. 4.

Father John A. Buehler, the pastor, said the events will include a concert, a golf day, and tours.
Here is the bicentennial schedule:

A short history of the church

Historic Old St. John Church was incorporated and celebrated its first Mass Jan. 21, 1819, in the Utica Courthouse, then located on John Street. Before incorporation, missionary priests from the Albany area served the community from 1814 to 1819. The first Mass during that period was believed to have been celebrated in the Devereux home in 1814.

In 1821, the first St. John Church was built on Bleecker St. on the present site of the church. The land was donated to the church by Mr. and Mrs. Morris Miller, who were non-Catholics. The structure was a white wooden building about 60 by 45 feet with Gothic windows.

In 1834, Mother Elizabeth Ann Seton (now a saint) sent three Daughters of Charity to St. John’s to establish a school for young women and an orphanage for girls. The school, adjacent to the church, later became the Utica Catholic Academy and provided a Catholic education until it closed in 1960.

In 1836, the first church building was moved across the street on the northwest corner of John and Bleecker streets, and in its place, a second larger church was built in the Greek Revival style.

In June 1868, the second church was demolished and exactly one year later the cornerstone of the third and present church was laid. During construction, the congregation worshiped in the John Street courthouse and at Utica Catholic Academy. The first Mass in the present church was celebrated on Christmas Day in 1869.

Since then, St. John’s has undergone many expansions and renovations, the latest in 2013 when the interior of the church was renovated and repainted.

The St. John’s History Committee has many more details on the church’s 200-year history. Please contact Anita Brown at anitabrown@adelphia.net.