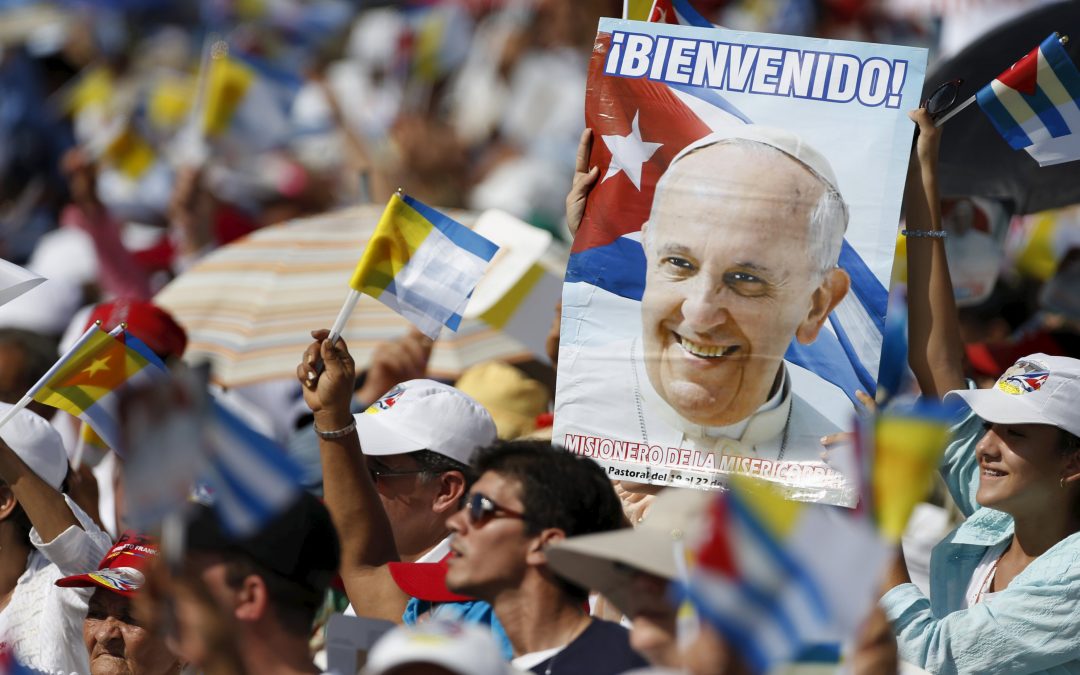 HOLGUIN, Cuba (CNS) — The scene would have been unimaginable a few years ago: A Catholic Mass in Holguin’s Revolution Plaza, where May Day parades and other patriotic events exalting the Cuban Revolution take place.

But on Monday, thousands flocked to the public space, also known as the Plaza Calixto Garcia Iniguez, and exalted Christ and the Virgin of Charity, as the city hosted its first religious event in that plaza: a Mass celebrated by the head of the Catholic Church.

A giant poster of the Virgin of Charity, Cuba’s patron saint, faced the plaza in the distance, as well as the red star signaling the headquarters of the Cuban Communist Party. Workers and schoolchildren were given the day off to attend the event, though it was clear that some in the crowd, unsure of how to pray, arrived just to get a glimpse of Pope Francis.

It has not been easy to get to this point, said Maria del Carmen Zellek Camayd, a local Catholic doctor who attended the Sept. 21 Mass.

“We were terribly discriminated,” she said.

Up until a few years ago, Christians, but particularly Catholics, could not be members of the Communist Party in Cuba and were banned from holding certain jobs or coveted spots at universities following the 1959 Cuban Revolution. Many practiced the faith in secret, and those who did not hide it suffered.

But some like Zellek say the hardships that she and other Cuban Catholics have faced have served as “purification” for the people and the church they love. But after that “purification,” Catholics in Cuba are undergoing a period of fence-mending with Cuban authorities, who have worked with church officials to prepare events before the pope’s arrival.

Father Angel Andres Gonzalez of the Diocese of Holguin said there is still a long way to go until Christians can fully participate in Cuban society, but papal visits certainly help. When St. John Paul II visited Cuba, it helped the government open itself up to the Catholic Church, he said. Pope Francis’ visit, as his predecessors’ visits also have done, forced collaboration between the government and the church. They learned to work together and have established some level of trust, as well as new paths of communication, he said. It also strengthened the church because its members worked more in communion with one another, he said.

Pope Francis’ visit also has brought about renewed hope by many Catholics on the island who are calling for more spaces and more collaboration with the state so that Catholics can help the country in areas where help is needed, such as education and societal values.

Juana Dania Vaillnit and Francisco Reyes Mora, have been married for 50 years — a feat in a country where Catholic marriage, and even civil marriage, has become rare. They said the church can help young people prepare for marriage and a family, institutions that can strengthen Cuba.

“We have to recognize that we learned love through our ancestors, who learned it through religion, through the church. It’s a place that helps form values,” Reyes said.

Getting help and freedoms from the government is a first step, but having Pope Francis, the spiritual leader of the church, talk to young people about the future addresses the spiritual side, which a lot of young people struggle with, Vaillnit said.

But this pope, with his humility and simplicity, is able to walk the tightrope that might be required to help the church make even more progress, not just with the government but also with people who have grown up without faith, Zellek said.

On Monday, Pope Francis went to bless the city of Holguin from the top of a hill that has a cross. In a simple place, he offered a simple prayer, asking that God bless and light the lives of the families, children, young people, the sick, and all who suffer. It’s a place that, though humble, is of great importance to “Holguineros,” as the people of Holguin are called, said Oscar Ramirez, 69.

The cross is a symbol of the town but also of Cuba and its outlook on life. There are a lot of lessons to learn up there, lessons that the world can learn from Cuba, Ramirez said.

”We know how to carry the cross with dignity,” Ramirez said.

Like a lot of Latin American nations, Cuba is a place that values humility, values a person who works hard, is not ostentatious, knows how to deal with hardships and grows closer to God through them, he said.

In visiting a poor and complicated country that has deep wounds, Pope Francis was deliberate in the lesson he wants to teach others, Zellek said. Life in post-revolution Cuba was difficult for Catholics, but would have been even more difficult without the church, its priests and religious, its values, Zellek said.

“They taught us to adapt,” to remain charitable when others closed the doors to places of worship, and to find creative ways to remain faithful.

What she has learned from the journey, she said, is that by embracing all those hardships, she embraced the Gospel and learned the lesson the pope has come to Cuba to teach.

“I believe in forgiveness and reconciliation,” she said.