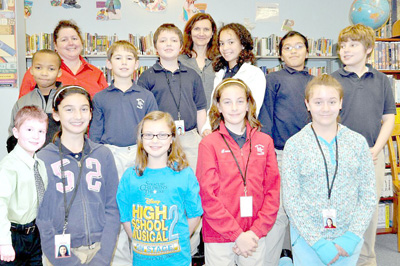 DEWITT — Fifth and sixth graders at Holy Cross School understand more about media messages delivered to them every day than the adults around them may realize.

Since October a group of a dozen or so students have been meeting twice a month after school with two Syracuse University graduate students and Sister Rose Bill, MFIC, publicity director of Holy Cross Parish. The adult leaders present the students with all different types of media in hopes that they will recognize how messages are sent, how to process the information and then how to write their own messages.

The students have produced press releases that have been distributed to local media outlets and they can take and send a photo via email to go with it. Sister Rose Bill may just be helping to train the next generation to take over her position.

At a recent meeting, fifth graders Wyatt Kinsey and Devlin McMichael took a look at several television commercials, some of which left them scratching their heads over the message.

The facilitator, doctoral student Marti Howell Collins led them through several different commercial options gently prodding them to explore what they were learning from the brief media messages they watched.

Devlin and Wyatt both decided that at times it is difficult to figure out just what the commercial is advertising.

They talked about their favorite commercials, a timely topic especially since the Super Bowl had been on television recently. They liked the new Doritos commercials.

Learning about advertisements in the media is just one aspect of Holy Cross’s media club. The students learned interviewing skills, which types of stories are newsworthy, what information goes into the lead of story, and how images are sometimes manipulated which can lead to distortion in the media.

These concepts may seem a little detailed for elementary school students but Howell Collins said the students are very sophisticated in their understanding of the media.

“Their generation is surrounded by media,” she said. “We’ve introduced ideas to them and nothing has been above their understanding. These are some of the same concepts I teach college freshmen.”

Howell Collins leads the class along with Olga Zatepilina, both are parishioners of Holy Cross who wanted to give something back to their parish. Zatepilina’s expertise is in print journalism and she facilitates the written aspects of the club, providing direction on writing and news gathering. The students then take their news items and post them on the school’s web site.

Some of the students are interested in design and art and others are more interested in writing. Howell Collins said even though students have varying interests, they respect each other’s ideas and efforts across the board.

Devlin said the media club is fun and that he enjoys talking about writing and Wyatt likes to write as well. They aren’t sure what the future holds as far as a career is concerned but they both said they would join the club again if it is offered next year.

The media club was Zatepilina’s idea and it has been interesting to observe how the students respond to the material.

“We want to present all the possibilities and the different ways people can write,” Zatepilina said.

The students will work on a personality profile soon sharpening their growing interview skills.

Sister Rose Bill said it is sometimes difficult at the grade school level to provide an after school club because the students are so busy with so many other activities. The students who do come to the media club are “remarkably dedicated” Howell Collins said.

“They amaze me,” she said. “They work so hard and it’s good for me to see their enthusiasm. They come up with ideas week after week.”

The facilitators get to pass on their knowledge about an area they love and the students imbue them with a renewed passion they can take back to their studies.