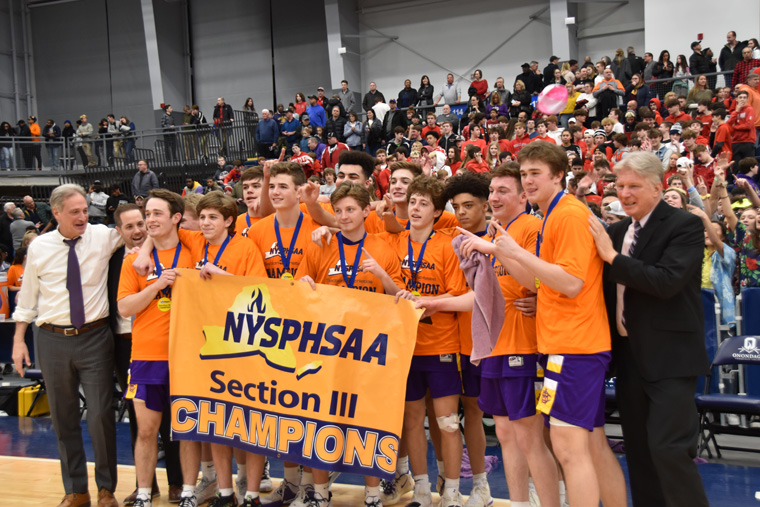 Seton Coach Chris Sinicki said Rumpel, who is 6 feet 3.5 inches tall, is fearless taking the ball to the rim, with a lateral quickness and the ability to “hang in the air and finish in the paint” despite a lot of traffic. Rumpel had 46 points earlier this season against Oneonta. He is averaging 35 points this season.

“He’s got the ball in his hands a lot,” Coach Sinicki said.

Dyes, also a junior, is about 6 feet 2 inches tall. He has been a starter on the varsity since the eighth grade, and this season he is averaging about 17 points per game.

Coach Sinicki said the Saints’ role players know what they need to do, and it all blended very nicely for the Saints this year. This is Seton’s second sectional title in three years.

Seton moves on to play Lowville, the Section III titlist, in the state playoffs at 6:30 p.m. on Sunday, March 15, at Floyd L. Maines Arena.

Also last weekend, the Christian Brothers Academy boys and girls basketball teams both beat rival Jamesville-DeWitt, while the Bishop Grimes girls fell short against the tourney MVP and her teammates from South Jefferson.

But the Grimes girls lost to South Jeff 55-43 in the Section III Class B final on March 7 at OCC.

In the CBA boys’ victory, Jason Boule made a layup to give the Brothers a 48-47 lead at the end of the third quarter against J-D. CBA was contending with the accuracy of J-D’s Payton Shumpert, a three-point shooter with a stunningly quick release. 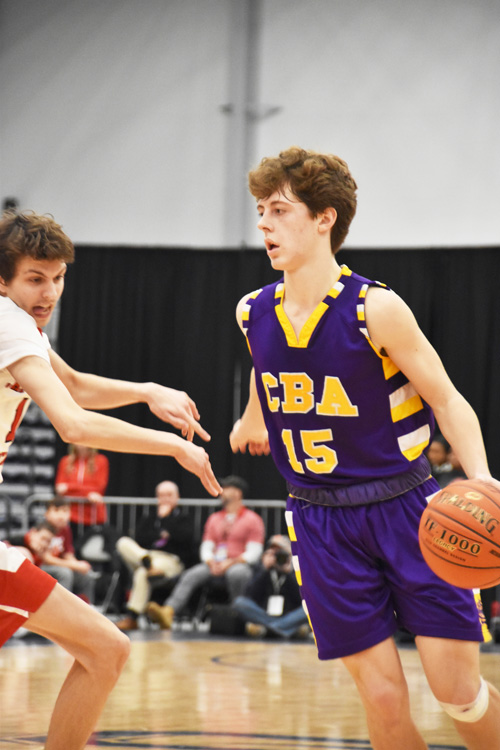 CBA took a 58-56 lead when Dan Anderson made a jumper at the top of the key. Anderson also made another big basket at the end of the game. He finished with 23 points in the victory and was named the tournament’s MVP.

CBA boys coach Buddy Wleklinski said: “If you’re talking a team victory, this was one. We had 13 guys and every day in practice they made each other better. We started out 1 and 4 … and then all of a sudden now we’re here winning the sectional championship; nobody would have thought that.

Asked about keys to the sectional-title game, he said: “Danny Anderson played unbelievably. [Sam] Haas did a great job down here. If you’re looking at the end, Jason Boule …, he’s more of a baseball guy. He said, ‘Coach, I want to win a sectional championship.’ … ‘Jason, we’ll see what we can do for ya.’ And there you go. … He ends up making big plays, he made that big three at the end of the shot clock [late in the game], unbelievable.” 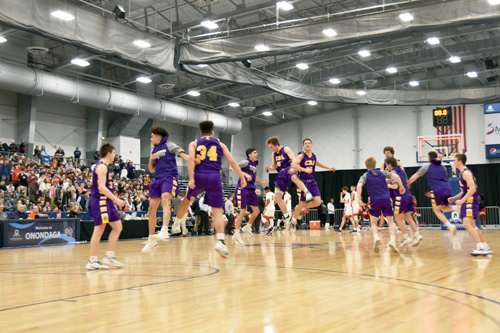 Asked about J-D’s superb long-range shooter Payton Shumpert, Coach Wleklinski said: “He’s a very good player. He’s a great player … and he killed us, yeah, he killed us, but we put Anderson on him, and then we did a little better job on him at the end.” 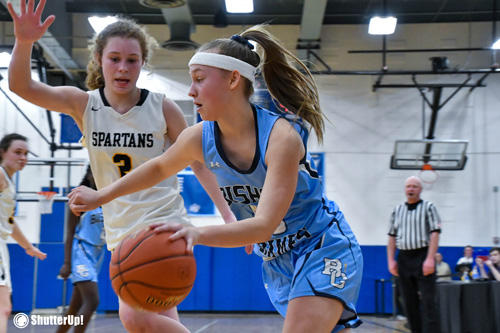 CBA’s Emily Hall scored 17 points in the girls’ victory over J-D and was named the MVP of the tournament.

In Class B, the 13th-seeded Lady Cobras of Bishop Grimes played in the Section III championship game against defending champ and current No. 2 state-ranked South Jefferson with every bit of heart, emotion, and intensity as they had in every game that got them there. But two rough two-minute stretches in the highly competitive game proved to be fatal.

The second-seeded Spartans (22-2) got off to a quick start against a Lady Cobra squad that appeared to be a little jittery early on. An 8-1 run in the opening two minutes put the Lady Cobras in a tough spot. But the Lady Cobras took the challenge head on as they settled in and took to their style of play, which meant driving the ball to the basket on offense and contesting every possession on defense. By halftime, the Lady Cobras pulled to within 25-20. 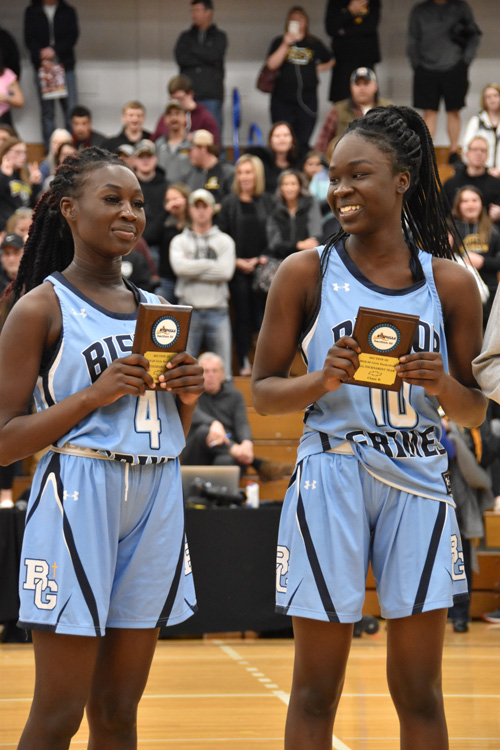 The second half started with South Jefferson trying to make some separation from the Lady Cobras by allowing tournament MVP Jackie Piddock to take over. Piddock, who attacks all the time, started to find seams to penetrate and eventually gave her team a 33-25 lead around the midway point of the third quarter. That was when the Lady Cobras made a run that looked like a microcosm of their postseason.

A deep three-pointer by Lora Marial was sandwiched between a pair of Naywel Ayeil finishes around the basket and the Lady Cobras closed to within a point at 33-32. After a South Jefferson basket on a nice pass from Piddock to Emma Schafer, a pair of free throws by Grimes’ Jenna Sloan made it 35-34. Unfortunately, that was the last time the Lady Cobras were that close. Turnovers in the final minute of the quarter allowed South Jefferson to finish the third on a 6-0 run.

Piddock took over in the fourth quarter, controlling the ball and finishing with tough shots in the heart of the Lady Cobra defense. With the deficit growing, the Lady Cobras exhausted more energy defensively and ultimately found scoring more difficult as they shot only 4-of-18 from the field in the final period.

Rhonee Shea Pal kept the Lady Cobras alive by scoring seven of the team’s nine points in the fourth. But Piddock’s six consecutive free throws sealed the game despite the fact that the Lady Cobras battled to the final horn, just as they had done all season. 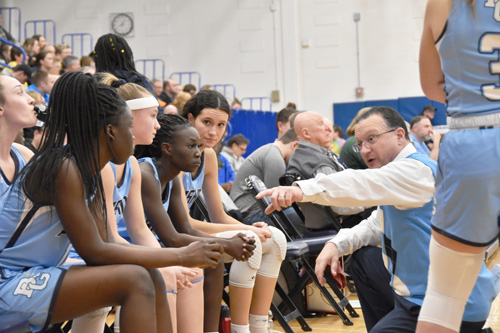 Bishop Grimes Coach John Cifonelli instructs his team during a timeout in the Section III Class B championship game on March 7 at Onondaga Community College. South Jefferson won 55-43, but Grimes takes comfort in advancing to the final and in some other big wins this season. “It’s been a dream season,” Coach Cifonelli says. (Sun photo | Tom Maguire)

“It wasn’t our day today,” Grimes Coach John Cifonelli said. “We finish on a couple more layups in the first half, and I think it’s probably a whole different ballgame down the stretch, to be honest, but tip our hats to them.”

Ayeil led the Lady Cobras with 12 points and 10 rebounds. Pal finished with nine points, five rebounds, and three assists. Sloan had another stat-stuffing game with seven points, seven rebounds, four assists, and three steals. Marial had six points and nine rebounds. Rosalie Vincent had another solid performance off the bench with five points and four rebounds. Ayeil and Marial were named to the Class B All-Tournament team.

The Lady Cobras held their own in nearly every facet of the game against the highly touted Spartans. They out-rebounded them 40-38 and kept the Spartans off the offensive boards for the majority of the game. The turnover ratio was also close. Unfortunately for the Lady Cobras, nearly half of those turnovers came in the two fatal stretches — at the beginning of the game and in the final minutes of the third quarter. But the Lady Cobras ended the magical postseason run with a tremendous effort against a great opponent. 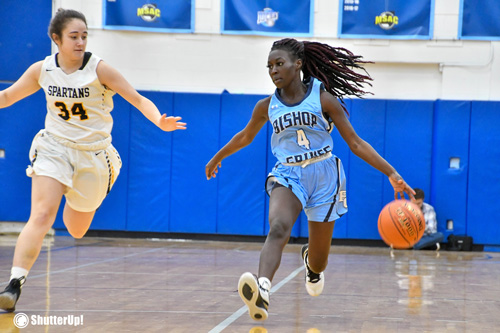 The foursome provided tremendous leadership in a culture-changing season in which they more than doubled the win total from the previous year. Returning starters Alicia Kelly and Jenna Sloan will be joined by super-subs Naywel Ayeil and Rosalie Vincent, plus Natalia Musolino, Lexi Emmi, and Althea Simmons as they try to build off the momentum from this campaign. A campaign that was defined by tremendous teamwork and courageous effort.

“I think we played our best basketball at the end of the year, which is what you try to do every year as a coach and as a team,” Coach Cifonelli said.

He said it was great to see his players “really figure it all out — really, they figured it out on their own. So that was exciting for me; we had a six-game winning streak midseason when we probably looked like we might have another rough year. The kids rallied and we had a six-game win streak, and that was really exciting — obviously going to CBA and beating them. They’re Class A champs. That was a nice win for us.”

He added: “These kids are so special, and I think it hurts more because our season’s over and we aren’t going to be together as a team — that hurts more than not winning a sectional banner, to be perfectly honest. These kids have been amazing to work with all season, they’ve stuck together, they’ve gone through some tough times, and they really helped each other out through all of it.

“It’s been a dream season for me.”

“I guess they just executed better,” she said of South Jefferson. “So, we didn’t come out as strong, but it just didn’t turn out the way we wanted it to.”

As for season highlights, she said, “I think the biggest thing is team chemistry. We finished as a team, we ended as a team, and we just are a family.”

Regarding season highlights, she said, “As a team, I think we played really hard. We played hard against CBA. We played in tournaments against teams from all over New York State.”