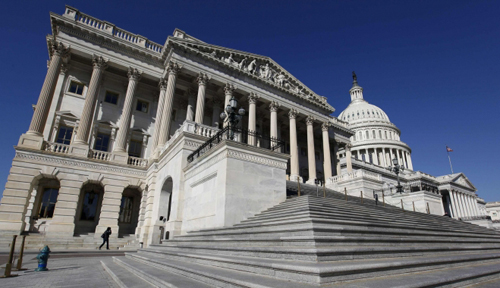 WASHINGTON (CNS) — House members voted July 28 to limit the number of people allowed in the House Chamber Sept. 24 when Pope Francis addresses a joint meeting of Congress.
The vote, which was part of a procedural measure, excludes former members of Congress and former House officers and chaplains from attending the papal address. Those allowed to attend include members of Congress, President Barack Obama and Vice President Joe Biden, Supreme Court justices, current House officers, the librarian of Congress, the architect of the Capitol and department heads.
The vote also approved of “other persons as designated by the Speaker.”

House Speaker John Boehner, R-Ohio, invited the pope and requested the vote to limit the audience. Emily Schillinger, a spokeswoman for Boehner’s office, said there is “a tremendous amount of interest in the pope’s visit and we are working to ensure as many people as possible can attend.”

She said the vote was “to make sure that attendance at the joint meeting does not exceed the capacity of the chamber to hold a safe and dignified event.”

The House Chamber, where bills are introduced, debated and voted on and where the president’s State of the Union address and joint sessions and meeting of the House and Senate are held, has more than 440 permanent seats; temporary seats are added for events when necessary.

Former members of Congress who are shut out from the House Chamber could see the pope’s address right outside, as it will be broadcast live on Jumbotron screens on the West Front of the Capitol. Boehner also announced this summer that Pope Francis has “expressed an interest in making a brief appearance on the West Front.”

Ticket allotment and distribution information for the telecast was scheduled to be released July 30.