Humbly, quietly, ‘he was just the deacon’s deacon’ 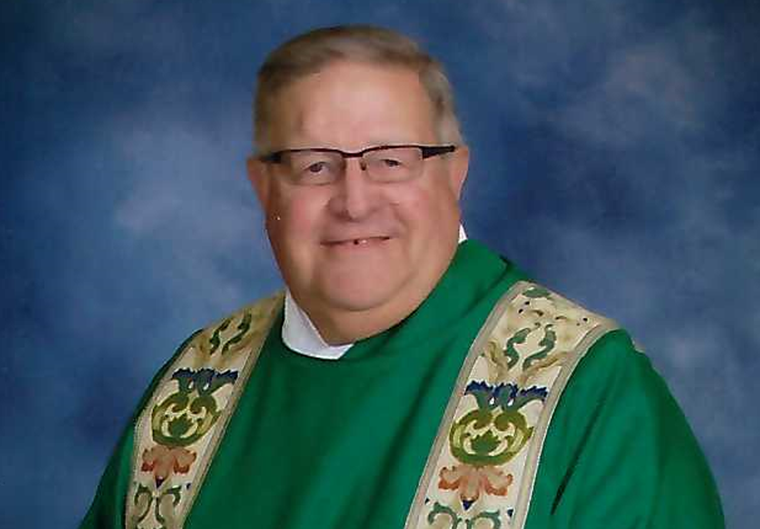 He never blew his own horn but he was happy to give the big beep with the firetruck and invite a friend aboard.

Deacon Joseph H. During, Jr., who was active in the linked parishes of St. Mary’s and St. Anthony’s in Cortland, died suddenly at the age of 73 on Jan. 22. Admired for his steady wisdom and his perseverance, he had dealt with heart issues for quite a while.

Family and friends remember his devotion to the Lord and also to his family, his brother deacons, his profession as an accountant, the Mattydale and Cortlandville fire departments, and many other civic and charitable organizations.

The funeral Mass was celebrated Jan. 29 at St. Mary’s, followed by burial at St. Mary’s Cemetery in Cortland.

What a day at the fair

“Years ago, my wife and I were at the state fair and it happened to be the early evening and we were wandering through the fairgrounds, and all of a sudden the parade started with all the volunteer fire departments participating in the parade, and along comes one of these big old vintage firetrucks and I look up: It’s Joe During driving this thing.

“He and his wife were in the cab and had all these people in the back of the truck and he … stopped and he waved and he says, ‘Jump on,’ he says, ‘you can join the parade with us.’ So there we were going on Joe’s vintage firetruck through the fairgrounds.”

“He grew up in a very faith-driven home,” she said, adding that he was an altar server at Assumption Church in Syracuse back when coal kept the heat going.

The future Deacon Joe attended Assumption School and his future wife of 52 years, Joyce Hull, attended the nearby Convent School in Syracuse; they met on the school bus.

“My grandmother had it in her head that he was going to be a priest, and that was kind of his direction until he met my mother,” Mary Ellen said.

Her grandparents ran a bowling alley, and Joe and Joyce’s date night consisted of “setting up pins for the Friday night bowling league.”

Deacon During served in the Army from 1967 to 1969. He earned his bachelor’s degree from Syracuse University and worked as an accountant for 32 years. He was ordained a deacon on May 6, 2006.

“I think that was his way of giving back to the Church,” Mary Ellen said of the diaconate, “and being able to relay God’s word. My dad was a phenomenal public speaker, and he used that to reach people in the Catholic Church and he touched many lives. People would comment continuously every Sunday — what a phenomenal sermon he had, or what a great speaker. He put his heart into everything.”

Asked if her father’s speaking style was like the crash of pins in a bowling alley, Mary Ellen said: “He got his point across. … He always had a story to tell, and there was always some humor in there. … He was so easy to listen to; he kept your attention with his voice and his tone.”

Deacon During had quadruple-bypass surgery in 2001, she said, and then a massive heart attack seven years ago. “So he’s been kind of running on a quarter of his heart for seven years now,” she said. “So we were blessed with seven extra years we almost didn’t have. But it was still sudden; you’re never ready for it.”

“I would say that Joe was very down to earth, he was just the deacon’s deacon,” said Deacon Dr. Robert Fangio, Director of Deacon Personnel for the diocesan Office of the Permanent Diaconate. When he was appointed to that post last year, he said, Deacon During “was one of the first ones to say, ‘Welcome. Welcome to your new position.’” Showing he meant it, he served as the treasurer of the deacon community — over many years, he took care of acquiring funds to say Masses for the deacons’ deceased brothers.

“He really lived a life of service,” Deacon Dr. Fangio said. He added that the perseverance that Deacon During showed amidst his health issues demonstrated how much he “cared and loved what he did. … He was first and foremost dedicated to his wife and three daughters, but very much so the diaconate was a great passion of his. … He could just capture the attention of a number of deacons and hold their attention with the stories he told.”

“He was very much engaged in the program,” said Deacon During’s diaconate classmate Deacon Adolph J. Uryniak, affiliated with St. Agatha’s in Canastota. He recalled his classmate as “easy to get along with and I think he was a good fit for the diaconate.”

Deacon During “always spoke positively of people,” said another diaconate classmate, Deacon Tom Picciano, the Deacon Administrator for St. Agnes in Afton and St. John the Evangelist in Bainbridge. He enjoyed chatting with Deacon During when they rode to classes together.

He added: “You could tell when his presence was there. … When you’re a deacon you’re asked to have your foot in both worlds and he truly did as an accountant and being able to help his parish” in business matters as well.

For all his accomplishments, Deacon During “was a guy who never blew his own horn; he just quietly went … about his business” and served God in the Church, said Deacon Cross, of Sacred Heart Church in Pinehurst, N.C., where he coordinates the Matthew 25 Ministry — outreach to people in nursing homes and extended-care facilities — and also runs the Confirmation program.

Deacon Cross, formerly the Director of Deacon Personnel for the Diocese of Syracuse, said that both Deacon During and he entered the diaconate program from the private sector.

“When you get to be 50 years old in that sector,” he said, “you’re kind of winding down your career in that regard, but Joe, being the professional that he was as an accountant, kept right on working; and he worked very hard as a professional accountant, both for his clients but also for many of the not-for-profit companies that he helped along the way.”

Deacon During was one of his “go-to guys over the years” when he was working in the chancery.

“If ever I thought I needed some advice or even some help with something,” he said, “I would call Joe, and he was always there. He would always say, ‘Yes, I can help you, I can do this for you,’ and he was always so willing, but he was also a voice of just calm, practical wisdom, and I always appreciated that in Joe.”