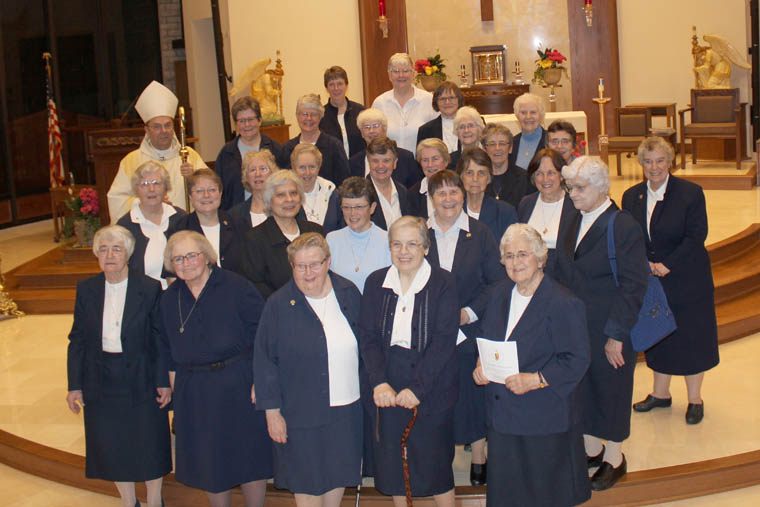 Binghamton — Four Daughters of Charity arrived in Binghamton in 1925. Sisters Martina Disney, Gertrude Eisele, Rose Anna Hastings, and Louise McParland came at the request of Bishop Daniel Curley to start Our Lady of Lourdes Memorial Hospital. They were hands-on in running the 25-bed facility in the old Corbett mansion where they also lived. The community quickly welcomed the sisters and their work.

On Friday, May 5, the community came together again for Mass and a reception to say farewell to the last of the 365 sisters who have served the Southern Tier.  And they leave with four, the same number who started things all those years ago.

Sister Ellen Reilly, D.C., is the only one still involved in full-time ministry at the hospital — as Lourdes’ chief mission officer.

“When I see pictures of the Corbett mansion, it looks a little like the Clark House that we live in now,” she said. “Those four sisters gave their heart and soul and did everything they could for the patients they were serving. That’s the consistent thing that has remained over the course of 92 years.”

Hundreds of people, including community members, Lourdes employees, and clergy, attended the Mass of Thanksgiving at St. Thomas Aquinas Church. About 30 Daughters of Charity were there as well, many who had spent some time in the Binghamton area serving not only health-care needs, but also schools, parishes, and social ministries.

In his homily, Bishop Robert J. Cunningham noted the day was bittersweet.

“This is a loss for us. Your ministry — even more important, the witness of your lives — has been a shining light to welcome God and neighbor to which we are all called,” Bishop Cunningham said. “We will miss you.”

He added: “Today is also a sweet moment.  A gratifying one. A rewarding one, because an ending allows us to remember the many blessings we have received. To go forward to something new, a place where God’s plan takes us.”

The Mass ended with a symbolic gesture as Sister Ellen handed over the Daughters of Charity banner to Kathryn Connerton, CEO of Lourdes Hospital. The white banner carries the motto: “The Charity of Jesus Crucified Urges Us.”

The Daughters of Charity was founded in 1633 in France by St. Vincent de Paul and St. Louise de Marillac. The Daughters also consider St. Elizabeth Ann Seton as the founder of the order in the United States.

Connerton made her way up the aisle out of the church as Lourdes staff followed behind.

The Daughters of Charity know they can leave things in the right hands with Lourdes, now part of the Ascension Health Care System.  Sister Ellen said the associates at Lourdes “know what it is to live the values of the hospital and to continue the healing ministry of Christ,” she said. “They understand the importance of making people feel they are cared for and loved.”

“The Daughters over the last several years have taken us through formation activities to help us really be much more involved in the daily decision-making as it relates to the religious nature of our institution,” said Connerton.

“I was born at Lourdes and so I started my life with the Daughters [of Charity] and I’ve grown to love them evermore over the course of my life,” said Connerton. “They put themselves second always to the community they’ve served and when called, they’ve come.”

The impact of the Daughters of Charity will continue to be felt in the Binghamton area.  Many in the community were born at Lourdes, were educated by the sisters at area schools, or just had their lives touched by their presence.

One story shared by Sister Ellen related to Sister DeChantal, said to be a tall and imposing figure wearing the signature cornette who would seem to appear almost out of nowhere when a hospital staffer would put their head down.

Sister Mary Ann Brawley, D.C., served at Seton High School, Endicott; Seton Catholic Central, Binghamton; and later in several leadership posts at Lourdes.  Often seen around the hospital, Sister Mary Ann remembered names and family histories even if decades had gone by since she last saw someone.  While board chairman at Lourdes she would often make time to talk with this writer.  And in her final days, she asked this deacon for prayers as she readied for her passing.

Each person who knows the Daughters of Charity in Broome County can tell many similar stories of how the sisters affected their lives.  Many recall those who were involved in education.

Sister Helen Gertrude Carroll, D.C., visited with former students from Seton after the Thanksgiving Mass. “Every minute was fun,” she said. ”I never had a student who didn’t pass.”

She repeated her favorite Gospel verse, which wasn’t forgotten after all these years.  It’s John 10:10 — “I came so that they might have life and have it more abundantly.” Still full of energy and enthusiasm, she’s looking ahead to not retiring.

Of the four sisters leaving Binghamton at the end of the month, three will go to Albany.  Sister Mary Rose DeDonato, who had been serving St. Paul’s in Binghamton as a pastoral associate, will begin a ministry of prayer. Sister Frederica Dunn, who has been volunteering in hospice and as a Eucharistic minister, and visiting parishioners at St. James and with the Rescue Mission, will continue volunteer work. As will Sister Linda O’Rourke who most recently has helped with Catholic Charities Food Pantries in Binghamton and Endicott.

Sister Ellen has been assigned to Providence Hospital in Washington, D.C. But she’ll be in Binghamton every other month to stay on the governing board of Lourdes as part of strategic planning.

“Based on our vow of obedience if our community asks us to move forward, we move forward,” said Sister Ellen. “We go with the decision and follow it and move to the next place where we hope we can continue that work and respond to that work that Jesus is calling us to.”