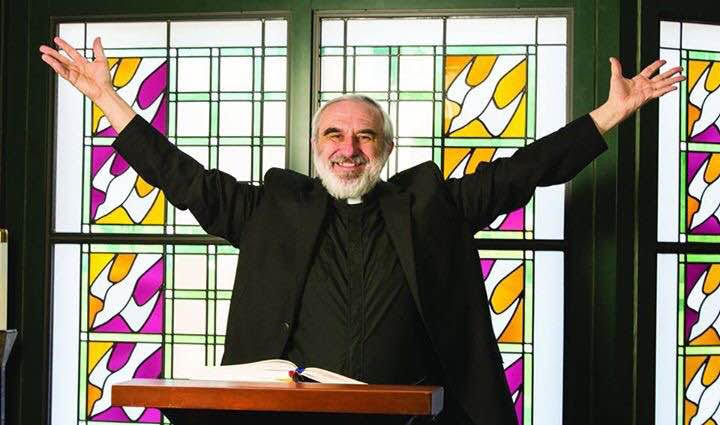 Highly accomplished themselves, the people who spoke at Father John P. Bucki’s funeral Mass didn’t try to imitate the style of the charismatic priest of 38 years.

A man who served on four continents, Father Bucki, S.J., who died Sept. 2 at age 67, still shines in photographs showing him cradling a globe as if it’s his little buddy and spreading his arms and smiling as if he’s the Jesuit symbol of thanksgiving.

Add a booming voice, a history of debating prowess, and a love for the needy worldwide, and one senses the extent of the loss of this, in the words of the Mass program, “friend to everyone on campus.”

That’s why several hundred people gathered Saturday, Sept. 16, at the Panasci Family Chapel at Le Moyne College, where a choir, musicians, and several speakers contributed to the liturgy.

Until recently, Father Bucki (pronounced “Buck-eye”) had served as the director of campus ministry and as rector of Le Moyne’s Jesuit community. A native of Buffalo and a Jesuit for 49 years, Father Bucki had been at Le Moyne for only five years, and yet the chapel was filled with mourners including Bishop Robert J. Cunningham and about 40 other members of the clergy.

“God, you chose our brother John to serve your people as a priest,” Bishop Cunningham said, “and to share the joys and burdens of their lives. Look with mercy on him, and give him the reward of his labors — the fullness of life promised to those who preach your Holy Gospel.”

Father Donald J. Kirby, S.J., the acting rector of the Le Moyne Jesuit community and Bishop Cunningham’s assisting presider for the funeral, asked God to “open the gates of paradise to your servant, and help us who remain to comfort one another with assurances of faith until we all meet in Christ and are with you and with our brother forever.”

The mourners came from Buffalo, where Father Bucki served at Canisius College and developed outreach programs; New York City, where he served at St. Francis Xavier Church, worked to establish a soup kitchen, and learned the names of people who were homeless; Washington, D.C.; Rochester; Niagara Falls; Ithaca; “from everywhere,” said the homilist, Father Francis X. Clooney, S.J., a longtime friend and a professor at Harvard Divinity School in Cambridge, Mass.

Father Clooney reminded the Le Moyne contingent that Father Bucki delivered the Benediction for the 2017 Le Moyne commencement. Father Clooney noted that Father Bucki told the graduates, “Always value the ability to take in breath, because with his [lung] cancer, he was short of breath. He said don’t take these things for granted.” The Benediction, about three and a half minutes long, is viewable on YouTube. Appropriate for the priest with outstretched arms, the closing hymn for his funeral Mass was “On Eagle’s Wings.”

Father Bucki was born at 10 minutes to midnight on Thursday, Jan. 12, 1950, at Buffalo’s Mercy Hospital. The oldest of three children, he was named after his father. For their first 12 years, Father Bucki and his brother, Carl L., shared a room in a South Buffalo home they thought of as a mansion: 900 square feet of living space, tenants upstairs, laundry and furnace in the basement.

The siblings grew up surrounded by aunts, uncles, and cousins: “all committed to work with each other, to celebrate life together, and to promote the welfare of the entire family,” said  Carl, the chief U.S. Bankruptcy Court judge for the Western District of New York.

“My brother would be so pleased to know that all of his cousins came to honor him in Syracuse this weekend,” Judge Bucki, of East Amherst, told the mourners.

Judge Bucki recalled that at night, while their mom tended to their little sister, Barbara, their dad would ease the boys into sleep with stories: sometimes fictional tales about lost treasure, but more often accounts of his own life experiences.

In the eighth grade the future Father Bucki won a vocation essay contest. He persuaded his friends to take a walking pilgrimage to Our Lady of Victory Basilica about three miles from the Bucki home, and he allowed his little brother Carl to tag along.

His brother’s success in academics was something that he always sought to emulate, Judge Bucki said. Father Bucki graduated at the top of his class at St. Teresa Elementary School in Buffalo and earned high honors at Buffalo’s Canisius High School.

On the Regents scholarship exam to determine eligibility for college assistance, Father Bucki earned the top score in his school and the third highest in Erie County.

In a competition sponsored by the Catholic Youth Organization, he won the diocesan debate championship in 1967 and 1968, teaming up with neighborhood friend Tim Russert, who went on to moderate “Meet the Press” on television.

Throughout high school “Jack,” as his family called Father Bucki, volunteered for community service. In the fall of his senior year, Father Bucki received acceptances from several outstanding schools. But by the spring of 1968, he had resolved to embark on a different path of service, Judge Bucki said.

Their parents were impressed by the Jesuit goal of commitment to service for others, Judge Bucki said.

So his older brother entered the Society of Jesus on Aug. 25, 1968. He graduated from Fordham University, where he was elected to Phi Beta Kappa, and also from the Jesuit School of Theology in Berkeley, Calif. He was ordained June 9, 1979.

Father Bucki’s sister, Dr. Barbara Bucki Ohm, a doctor of veterinary medicine who lives in West Coxsackie, said that her brother collected many mementos of his priestly service; her job after his death was to clean his room, and she hauled away two truckloads. She said she will never regret that task.

“He saved the 1966 Canisius High School fall sports schedule,” she told the mourners. “I have no idea why; he never played sports.”

Organizing all the letters, gifts, stuffed animals, and photos, she said, “gave me a heartwarming insight into the life of my brother: priest, confidante, human being.”

“He was human. … He had days of self-doubt and uncertainty,” Dr. Ohm said. “And he suffered pain, especially as his cancer progressed. He kept a pain diary, and often described some days as excruciating.”

When she asked him about those days, he’d say, “‘It’s OK,’ or ‘It’s been better; we’ll give it some time.’ He still had dreams and aspirations and hopes for the future: The cancer would go away, he could resume his ministry, he might still go hiking. He trusted in God. ‘Relax. Let God take over.’ He told that to his congregation, and to his students, and to his friends. He told it to himself. He expected life with its ups and downs.”

She added: “He listened, he accepted, he never judged anybody. He was always there for all of us. He celebrated life.

“He wrote: ‘The purpose of life is healthy relationships.’ And he celebrated those relationships — weddings, anniversaries, baptisms, birthdays, and even funerals. He drove my mom from Buffalo to surprise me for my 50th birthday.

“His friends had celebrations for his 50th and 60th birthdays in New York City. And he enjoyed sharing the celebration with all of them.”

“I will miss my brother,” Dr. Ohm said. “But he left a kind and wonderful legacy.”

In one of his notebooks, she said, Father Bucki wrote: “‘For my tombstone write: ‘He lived!’ Well, he did. And he did it well.”

Father Bucki’s sister-in-law, Deborah Bruch Bucki, RN, Ph.D., a councilmember in the Town of Amherst outside Buffalo, said, “Jack was an inspiration and a great listener … great public speaker. He had a remarkable voice, an unforgettable voice … that will be remembered by many.”

Father Bucki’s nephew Craig R. Bucki, an East Amherst resident and a partner in a Buffalo law firm, still has the letters that his Uncle Jack sent to him from overseas. Father Bucki’s service included stints in the Philippines, Nigeria, and Europe.

What is the Bucki secret to debating and public speaking?

“I saw my uncle preach,” Craig said. “And when he preached, he would make a story or his point relatable to the congregation. And so I do litigation for a living at Phillips Lytle [LLP], and so I spend a lot of time in court. And whenever I am in court, I try my best to think:

“How will I make a complex subject relatable to my judge, or relatable to the jury if I happen to have a jury?”

Asked why his uncle became a Jesuit, Craig said, “He always wanted to be a priest, and I think for him the question was, Do I become a diocesan priest or do I become a Jesuit?

“I think for him, he loved Canisius High School in Buffalo, which is the Jesuit high school. He loved his experience there. He really looked up to the Jesuits that he saw as people of faith, and people who did good deeds and could make a difference in the world in the works that they did. …

“And I don’t think he regretted his decision. In 49 years of ministry, we were blessed.”

“John learned lessons well from family and applied them to the world,” Judge Bucki said.

“He became a cheerleader for others: for his family, his friends, his neighbors, his students, everyone.”