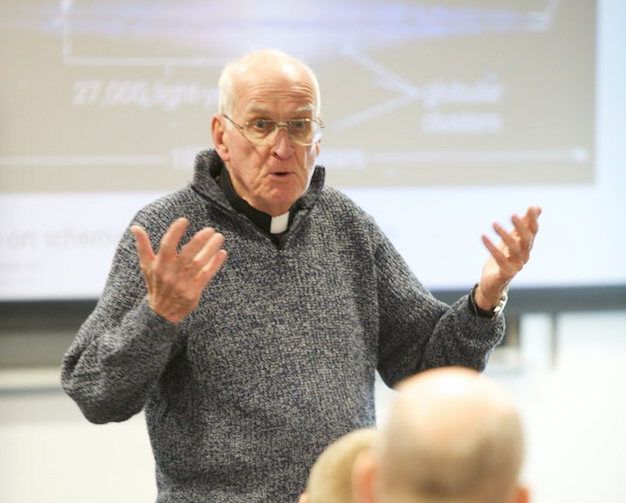 Jesuit Father George Coyne, former director of the Vatican Observatory and current member of the Le Moyne College faculty, passed away Feb. 11 after a battle with cancer. He was 87.

In Father Coyne’s memory, we are republishing this feature from our 2012 archives. AMDG.

New Le Moyne College faculty member Father George Coyne, SJ, fell in love with astronomy as a young Jesuit more than half a century ago, but he still lights up when he talks about the subject and the professor who sparked his interest.

The professor taught Greek but had a degree in mathematics and a vibrant interest in astronomy, a topic he sometimes veered to in class. He took note of Father Coyne’s interest in his tangents.

“It was forbidden fruit. But it was good fruit!” Father Coyne said with a laugh. “That really turned me on to being into astronomy.”

Father Coyne went on to earn a bachelor’s degree in mathematics from Fordham University in 1958 and a doctorate in astronomy from Georgetown University in 1962. He spent 45 years teaching in the astronomy department of the University of Arizona and 42 years on the staff of the Vatican Observatory, 28 of those years as director. His association with both institutions helped him facilitate the establishment of the Vatican Observatory Research Group at the university’s Steward Observatory. He also spearheaded a $5 million capital campaign to place the Vatican’s telescope at the Mount Graham International Observatory in Arizona, a move necessitated by increasing obstruction by buildings and light pollution. Father Coyne also worked to establish the Vatican Observatory Summer School, a month-long program that brings young astronomers to the Observatory’s headquarters in Castel Gandolfo, Italy.

In January, Father Coyne joined the faculty of Le Moyne College as the first McDevitt Chair in Religious Philosophy. The chair is funded by a bequest from the estate of Robert and Catherine McDevitt, devoted Catholics from the Southern Tier.

“That particular chair represents the McDevitts’ love for the Jesuit charism, the intellectual tradition of inquiry, and faith and reason working simultaneously with one another,” said Dr. Linda LeMura, Le Moyne’s provost. “We wanted to obtain a scholar of international stature who could speak to the relationship between faith and reason. Right now, in Jesuit circles, the quintessential example of that is Father George Coyne.”

Father Coyne’s work in science and his personal belief in God puts him squarely at that intersection of faith and reason. And aside from his many achievements in the world of astronomy, Father Coyne is also known for advancing a position he arrived at as a result of the intertwining of his scientific knowledge and his understanding of his faith: his rejection of intelligent design as a scientific explanation for the creation of the universe.

“Evolution is the best scientific explanation we have for all the data we have about the universe and everything in the universe, including all life forms and ourselves,” Father Coyne said. Intelligent design, on the other hand, he says, which posits that the universe is so complex it couldn’t have come together unless God, the intelligent designer, put it together, is not science.

Rather than seeing God as a “watchmaker,” Father Coyne said he sees “a marvelous God” who willed the universe into being and who “made a universe that has a creativity of its own through evolution.” In a 2005 piece published in British Catholic publication The Tablet, he wrote that he believes “God in his infinite freedom continuously creates a world that reflects that freedom at all levels of the evolutionary process to greater and greater complexity. God lets the world be what it will be in its continuous evolution. He is not continuously intervening, but rather allows, participates, loves.”

Father Coyne penned the article in response to an opinion piece Archbishop of Vienna Cardinal Christoph Schonborn published in The New York Times. In his article, Cardinal Schonborn said, “Evolution in the sense of common ancestry may be true, but evolution in the neo-Darwinian sense — an unguided, unplanned process of random variation and natural selection — is not” and that the theory was not compatible with Christian faith. Father Coyne said he felt compelled to respond because the process is not purely random and he therefore does not see it as incompatible with Catholic teaching.

Father Coyne’s relationship with Le Moyne began in 2009, when Dr. LeMura nominated him to receive an honorary doctorate. She kept in regular contact with Father Coyne in hopes of one day bringing him on to the faculty, persistence that has now paid off.

One of the factors that attracted him to Le Moyne, Father Coyne said, was the relative smallness of the school, as compared to places like Georgetown or the University of Arizona, where he taught classes of more than 100 students.

“The smallness, I think, has brought a learning family together here,” he said. “There’s a lot of back and forth from faculty to student and student to faculty. There’s also a lot of interdisciplinary work. I’m going to teach a course next semester on science and religion in the religious studies department, and I’m really looking forward to that.”

The opportunity to be a part of a Jesuit community was another factor, as he had not taught in a Jesuit institution previously.

“The Jesuit community means a lot to me — living with people who are happy to live together and very devoted to their work,” he said.

Father Coyne said he is still learning the ropes but is looking forward to helping to further develop Le Moyne’s science program. Dr. LeMura said she hopes to see him introduce new interdisciplinary courses and host public lectures on faith and reason.

For now, Father Coyne is teaching one course, an introductory astronomy class of about 30 students. Only three students are science majors.

“[The class] is really interesting. [Father Coyne] is a great teacher,” said Brendan Copeland, a sophomore majoring in management.

Copeland and several other non-science majors in the class said Father Coyne is able to teach complex concepts in a way they can understand, but that the material is still challenging. Though they’re enjoying the class, none of them is considering astronomy as a career just yet.

Sharing his passion for astronomy and interacting with young people is what keeps him teaching after all these years, Father Coyne said. The reason he teaches, much like the reason he was drawn to astronomy to begin with, is simple.