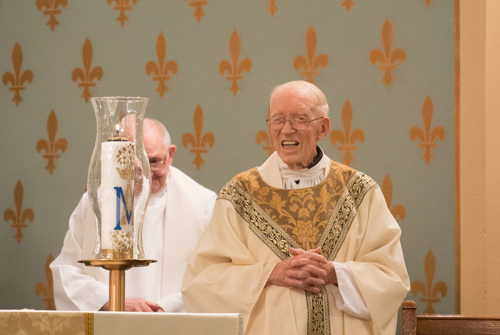 A priest of the diocese for more than 70 years, Msgr. Culkin was a graduate of St. Mary’s School and Fulton High School. He received his bachelor’s degree in accounting from Fordham University. He studied for the priesthood at Christ the King Seminary at St. Bonaventure University and St. Bernard’s Seminary in Rochester, and was ordained a priest on June 3, 1944.

Over more than four decades, Msgr. Culkin served as parochial vicar of St. John the Baptist in Rome and St. John the Baptist in Syracuse, and as pastor of Immaculate Conception in Greene, St. Patrick’s in Jordan and St. Peter’s in Rome, retiring in 1990 after 19 years there. He has also served at St. Joseph’s in Lee Center and was episcopal vicar of Northwestern Madison and Western Oneida Counties. He was named an Honorary Prelate by Pope Paul VI in 1973.

In 2014, Msgr. Culkin was joined by Auxiliary Bishop Thomas Costello and Father Donald Karlen for a special jubilee celebration at St. Peter’s Church in Rome. Msgr. Culkin, celebrating 70 years as a priest, served as St. Peter’s pastor and continued to celebrate daily Masses there; Bishop Costello, celebrating 60 years, is a native son of the parish and celebrated his first Mass there; and Father Karlen, celebrating 50 years, served there in his first assignment after ordination and continues to serve there as a priest in residence.

Msgr. Culkin (far left) is celebrated on the occasion of his 100th birthday in 2014. (Sun archive photo)