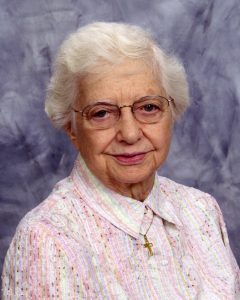 Sister M. Lisbeth Hartnett, IHM, of the Sisters, Servants of the Immaculate Heart of Mary died on Wednesday, Aug. 8, 2018, at Our Lady of Peace Residence in Scranton.

Sister Lisbeth served as a teacher from 1949 to 1960 at Most Holy Rosary Elementary School in Syracuse. She also taught in Forest Hills, N.Y.; Raleigh, N.C.; Wilmington, Del.; and Greensboro, Md.

Sister also served as a principal in Rocky Mount, N.C.; Goldsboro, N.C.; Clinton, Md., and Williamsport, Pa. She also served as assistant to the administrator of the IHM Center in Scranton, Pa. From 2010 until the time of her death, Sister Lisbeth was a prayer minister at Our Lady of Peace Residence in Scranton.

She received a bachelor of arts degree in English/social sciences and a master of science degree in education from Marywood College.

She is preceded in death by a brother, Maurice William, Jr.; and two sisters, Patricia Louise and Sister M. Maurice, IHM. She is survived by nieces and nephews; and by the members of the IHM Congregation.

The funeral was Aug. 11 with Mass of Christian Burial at Our Lady of Peace Residence, Scranton. Interment followed at St. Catherine’s Cemetery in Moscow, Pa.