In new video series, seminarians ‘bring’ their chapel to the people 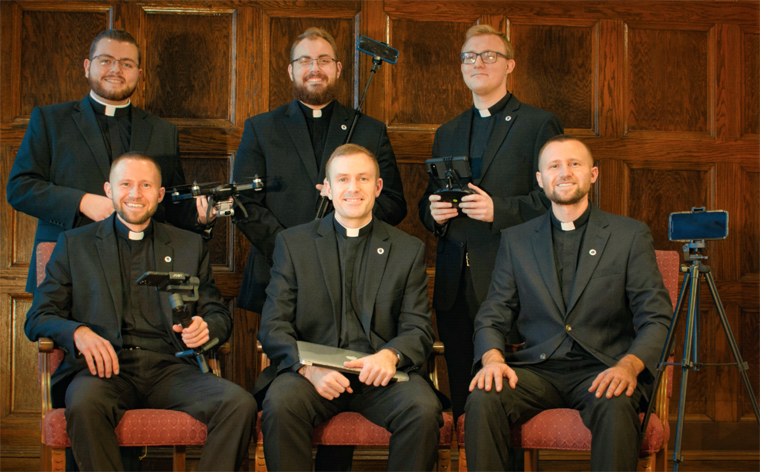 Precautions amid the coronavirus pandemic meant the seminarians of St. Mary’s Seminary & University in Baltimore would mainly be staying on campus this year — and most visitors would be staying out.

“Each year hundreds of alumni return, dozens of tour groups and high schools visit — they get to glimpse our life here for a moment, and it is always a joy to show people around this place,” Diocese of Syracuse seminarian Deacon Brendan Foley wrote in a recent email to the Sun. “It is quite the loss to not be able to do that this year.”

But, Foley continued, “this opportunity was before us to ‘bring’ the chapel to people who might find themselves isolated during this uncertain time of pandemic.”

“For the Glory of the Father,” a series of 17 videos created by a team of seminarians including Foley, takes viewers inside St. Mary’s Chapel and explores the beauty and meaning of the chapel’s art, including the crucifix, murals, stained-glass windows, and Blessed Mother statue.

Detailed closeups of each piece are paired with reflections and insights from seminarians, priests, and Baltimore Archbishop William Lori on its scriptural, theological, and historical significance. Aerial panoramas, archival photos, and shots of seminarians and faculty provide a picture of life on campus. 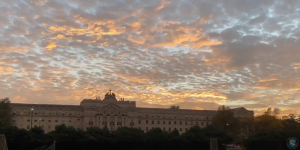 The goal of the series is “opening up the meaning of the beauty of the chapel,” Foley said in a Zoom interview last week. In addition to “getting to see various angles of the chapel and being able to appreciate different features and details that you might not have noticed otherwise, the [series] does show the life of the seminary and gives people a glimpse into our lives here.”

“For the Glory of the Father” debuted on the seminary’s YouTube channel Ash Wednesday, but the plan behind it was hatched over the summer.

“It was late August 2020 and the beginning of a new semester amidst Covid-19,” Ben Daghir, a seminarian of the Diocese of Erie, Pennsylvania, writes in a commentary accompanying the video series. “We were trying to make sense of having an in-person semester in seminary unlike the previous spring when we were sent home with online coursework. Also, we were concerned about a semester without ministries in parishes, hospitals, and homeless shelters.”

Daghir asked some of his fellow seminarians, “What if we did a video series on the stained-glass windows in our chapel and published them on YouTube? We’ve all done a little video work before. We love ‘Word on Fire’ and the work that they produce. Let’s go for it.”

Over the next five months, Daghir writes, the team spent “hundreds of hours of gathering footage, brainstorming, scheduling presenters, editing, learning through trial and error, researching video angles, [and] meeting to discuss the styles of videos.” Numerous faculty, fellow seminarians, archivists, and administrators also offered expertise and feedback throughout the project. 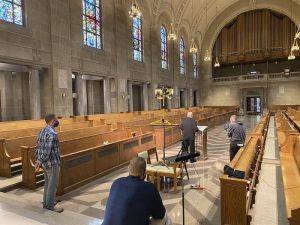 Members of the video production team film a segment in the chapel. (Photo courtesy Brendan Foley)

The high-quality end product belies the project’s near-zero cost. The seminarians used their cell phones to film and iMovie to edit. Painter’s lights set on a high-top table balanced on four chairs served as the lighting rig. YouTube tutorials provided technical guidance. The only real expense was licensing the instrumental music that plays throughout each video, Foley said.

However, “much of the fruit of this project came through the diversity of gifts and talents in the men God has called to be here,” Foley noted. “That’s what makes this project so special: Aside from the captivating images and cinematic effects, before the viewer is the collaboration of men of different ages, backgrounds, and life experiences, all called by God.”

The technical side of the project allowed Foley to build on work done during his pastoral year at St. Elizabeth Ann Seton in Baldwinsville two years ago. “We had opportunities to try to work on videos in the parish, so we definitely used that skill,” he said. Foley also sees bringing this technical proficiency to his priestly ministry following ordination this spring, and he noted that the seminary is currently offering an elective on how to best implement technology in a parish, taught by a local pastor.

Creating the reflections also gave the seminarians a chance to work on their pastoral skills. There are four dimensions to a seminarian’s formation for priesthood, Foley explained — intellectual, spiritual, human, and pastoral — and because of pandemic restrictions, pastoral ministry would be much different this year.

“We were committed to making sure that there were some ways that we could improve or grow in the pastoral dimension of formation, without having the opportunity to go to parishes. … Putting together these reflections was almost like a preaching opportunity for the deacons who were not going to otherwise have many opportunities to do that,” he said. 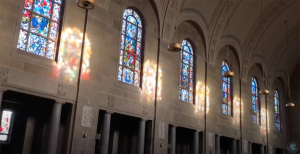 “I enjoyed being a part of the project,” Walker told the Sun in an email. “I have been praying in the chapel for the better part of 6 years and the windows are something I always find myself looking at. Each window is rich with meaning and the videos help to show people outside the seminary just what a treasure these windows are.”

Foley’s reflection examines the stained-glass window depicting the Epiphany. He sees that window four or five times each day from his regular seat in the chapel, just as he has over his years at St. Mary’s. But the project allowed him to see the window and the whole chapel differently.

Foley spent so much time filming in the chapel, “by the end of the fall semester, I could tell you what time it was based on where the shadows of the stained-glass window were moving,” he said. “Paying attention to that level of detail gave us a whole new meaning to being in the chapel.”

He hopes those who watch will experience the same gift.

Visit stmarys.edu for all of the videos in the “For the Glory of the Father” series and a history of St. Mary’s Chapel.

Watch the reflections by Diocese of Syracuse seminarians Brendan Foley and Dennis Walker below.