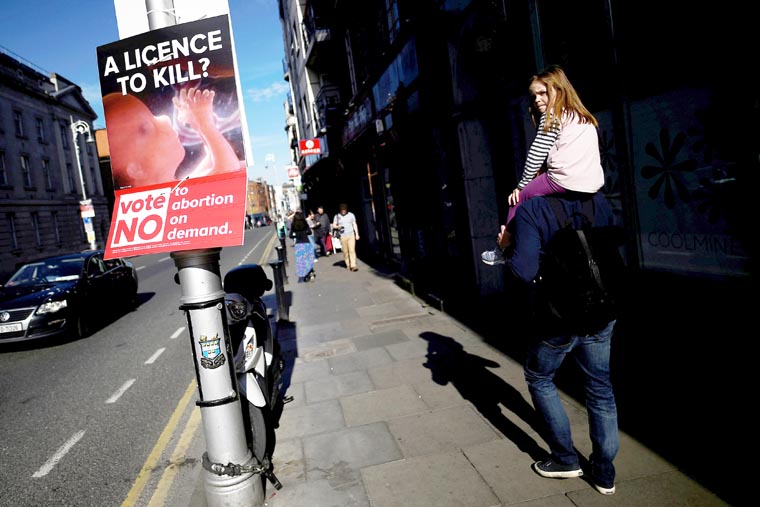 DUBLIN (CNS) — Irish pro-life campaigners have criticized a decision by tech giant Google to ban campaign advertisements before the May 25 referendum on whether the right to life of the unborn should continue to be enshrined in the constitution.

The government wants voters to amend the constitution to repeal the Eighth Amendment, which currently guarantees the right to life of unborn children “with due regard to the equal right to life of the mother.” If removed, legislation will permit abortion on demand up to the 12th week of pregnancy and abortion in other specific circumstances up to 24 weeks.

Google announced May 9 that it would ban all campaign ads from its search engine and the YouTube video sharing website. The move was immediately welcomed by the leading pro-choice “Together for Yes” campaign. However, pro-life groups were sharply critical of the decision.

John McGuirk, communications director for Save the Eighth, accused Google of trying to rig the referendum.

“Online was the only platform available to the ‘no’ campaign to speak to voters directly. That platform is now being undermined, in order to prevent the public from hearing the message of one side,” he said.

A spokesman for Google said it had become concerned by what it described as “electoral integrity.”

However, he refused to elaborate or to provide evidence of any alleged behavior that breached standards.

Google sources quoted by The Irish Times newspaper said executives began to fear that if the referendum were defeated, the company would be the subject of “an avalanche of blame and further scrutiny” of their role in election campaigns.

Cora Sherlock of the Love Both campaign, which is working for a “no” vote in the referendum — said the enthusiastic welcome for the decision from pro-choice groups is “extremely revealing.”

She said the Google decision “clearly puts the ‘no’ side at a big disadvantage. Everyone who is paying any attention to the campaign knows that the pro-life side is being shut out of the debate by the mainstream media. It’s woeful how little real debate is taking place on the extreme nature of the government’s proposal for abortion on demand.”

Social networking platform Facebook announced it would ban all foreign advertising in the campaign, but continue to permit Irish advertisements, a move welcomed by advocates from both sides.

Abortion is currently illegal in Ireland, except if there is a risk to the life of the mother, including if the mother says she is suicidal.

Polls have shown a clear lead for the pro-choice position, but a 10 percent swing against repeal has bolstered pro-life advocates in the final weeks of the campaign. The latest poll found that 45 percent said they would vote “yes,” 34 percent “no,” while 18 percent of voters said they were undecided. The remaining refused to answer.