‘It takes a small army’: All Saints volunteers prepare and serve up Christmas feast for charity 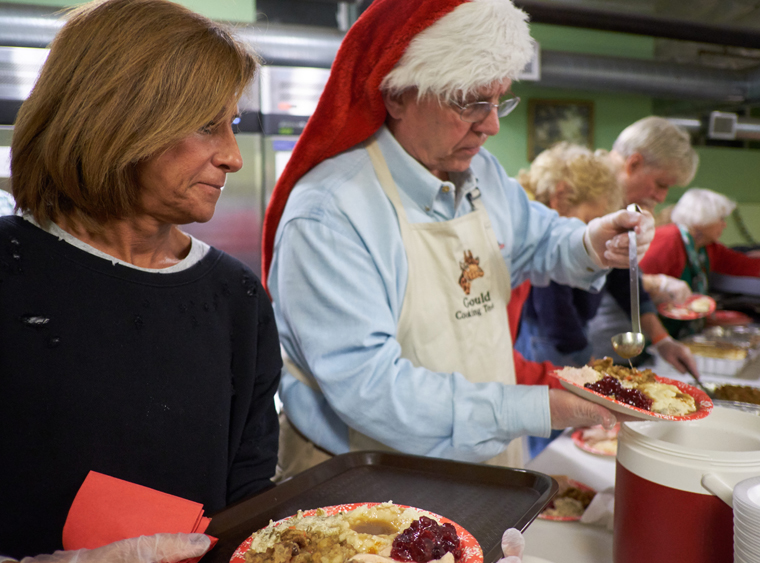 The taster said the turkey was delicious, moist, tasty.

“I’ll be over for Thanksgiving,” quipped Jack Goodman, a member of the cooking crew at All Saints Church in Syracuse.

But first up is Christmas. About a dozen volunteers hit the kitchen Sunday afternoon for the final prep for a huge dinner for the Catholic Charities Men’s Shelter. They might be called les derniers chefs: “We’re just at the end,” said volunteer Ginny Winters; a total of about 60 people are involved making the various dishes.

For many years, All Saints parish did an annual breakfast for the shelter. In the fall of 2016, Murray and his wife, Ellen, participated in the breakfast and made their first visit to the shelter. “We felt honored and humbled to spend time with the men,” Murray said.

They asked: “Why can’t we provide a great meal for the men each month?” They met with the Pastor, Father Frederick Daley, about supplying “a good hearty, healthy, and homemade meal. …

“The response from the parishioners has been humbling. It takes a small army to prepare the food and then transport it and serve the men. … This is a really good homemade dinner that the men really enjoy.”

“Give back to the community a little bit,” explained volunteer John Arquette.

Volunteer Michael Fishman, a very talented turkey carver, said, “My wife and I like to do something nice for other folks on the holidays. … It’s a nice holiday celebratory meal, it’s a very special meal. And a lot of people have put a lot of energy and a lot of effort into it.”

His wife, Julie, said, “I think it’s also a good mental break for yourself to remind yourself what the season’s really about, instead of just buying things.”

“We’re deeply grateful for the support of these volunteers and all those who contribute to the shelter, especially now as we are open 24 hours a day, seven days a week,” said Mike Melara, Executive Director of Catholic Charities of Onondaga County. “For us, they’re demonstrating the true spirit of the Christmas season by bringing hope and comfort to some of the most vulnerable people in our community.”

“Beautiful delicious food for these people,” said Muhammad Noman, the Sunday to Thursday program coordinator for the shelter.

“They just light up, and they’re so appreciative,” Winters said.

Among the dozens of men who partook of Sunday’s dinner was Ed, who is in his 50s. He sat down with a smile and was immediately served the turkey treat. Quoting his grandmother, he said: “God is good all the time; all the time, God is good.”

He pronounced the potatoes as “potato-y.” He explained that the potatoes had the proper amount of lumps — “that’s potato-y to me.”

“Everything else is superb,” he said. “Thank you very much — I am grateful.”

From various dessert pies he chose the apple — “we can do the apple pie; it has the right amount of cinnamon — thumbs up.”

Shelter resident Dom, in his 20s, said, “It’s a blessing for them to come in and show us love and feed us. … You never know how you can change someone’s feelings” by supplying a meal. He anticipated that he would “sleep good tonight.”

Middleaged resident Gerald said he is “truly blessed” whenever someone brings a good hot meal.

Attendee Father Daley offered a prayer of thanksgiving, remembering  those who are struggling around the world and in the city of Syracuse — those who have much less. He also joined the volunteers and residents who got up and sang Christmas songs next to the Christmas tree.

Before sitting down for what he called an “A-plus” meal, Father Daley said:

“In today’s Gospel, John the Baptist said, if you’ve got enough food, share it with those who don’t have any. If you’ve got two coats, give a coat away.

“And so the heart of the Gospel is recognizing that every person is created in God’s image and likeness out of love. We’re all children of God and so we’re sisters and brothers to one another. And so, to be faithful to the Gospel, Jesus loves each person but has a special sense for those who are struggling, those who are on the bottom, those who are in need.

“And so, to be faithful to the Gospel, this is what we need to do. So I’m really proud of our parishioners that just step up in so many different ways to reach out to those in need, both locally and globally, and very thankful too for Catholic Charities.”

When he arrived at the shelter on the day after the feast, program coordinator Noman noticed something: “happy faces.”