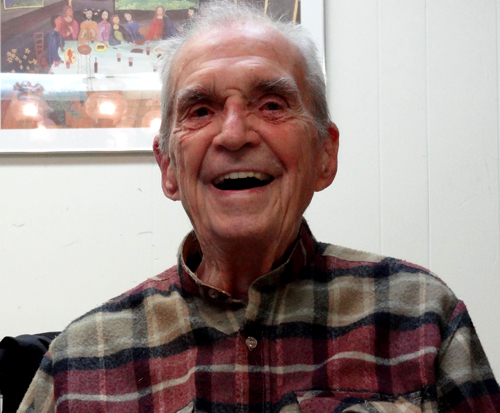 Daniel Berrigan, who with his brother Philip, then a Josephite priest, became a prominent activist during the Vietnam War, died at Murray-Weigel Hall, a Jesuit health care community in New York City, according to media reports.

“In his time he was in a lot of ways the conscience of the church in Central New York,” Auxiliary Bishop Thomas J. Costello said May 1. “His leadership in the civil rights movement and his antiwar efforts on Vietnam were heroic.”

Berrigan made some people uncomfortable with his public actions, which raised debate about the appropriate role of Catholics — and clergy — in opposing war, racism, and injustice.

“More traditional people were probably offended by what Dan was saying, and more progressive people were applauding him,” Costello said.

The once-fiery activist, teacher, and poet attended his brother’s funeral July 26 at St. Lucy’s Church. He did not speak during the Mass, but sat in a wheelchair next to his brother’s casket. (Philip Berrigan died in 2002 at age 79.)

Berrigan, who taught at Le Moyne College from 1957 to 1963, authored more than 50 books of poetry, plays, and essays. The final verse of his poem “Some” was printed on Jerry’s funeral card, highlighting the motivation for the Berrigans’ activism, which sometimes landed them in jail. The verse also includes an unmistakably Catholic metaphor: “(I walk) because the cause is the heart’s beat, and the children born, and the risen bread.”

Berrigan cited Trappist monk, writer, and trailblazing interfaith champion Thomas Merton and Catholic Worker co-founder Dorothy Day as his role models. Merton and Day are two of the four Americans Pope Francis praised for making America better when he spoke this summer to Congress. (The others are Abraham Lincoln and Martin Luther King, Jr.)

In May 1968, the two Berrigan priests and seven other Catholics used homemade napalm to burn draft files in Catonsville, Md. Both Berrigans were sentenced to three years in prison. Berrigan wrote a play, “The Trial of the Catonsville Nine,” based on the trial transcript.

“Our apologies, good friends, for the fracture of good order, the burning of paper instead of children,” Berrigan said in a statement read at the trial. “We say: killing is disorder, life and gentleness and community and unselfishness is the only order we recognize. For the sake of that order, we risk our liberty, our good name.”

In 1980, Berrigan, brother Philip, and six others trespassed onto the General Electric nuclear missile facility in King of Prussia, Pa., where they damaged a nuclear warhead and poured blood on documents. The civil disobedience, for which the participants were charged, convicted, and served federal prison time, began the Plowshares Movement.

“Plowshares” refers to the Old Testament verse in the Book of Isaiah, who said that “weapons shall be beaten into plowshares.” Since 1980, more than 100 plowshares anti-nuclear demonstrations have taken place.

Berrigan was born on May 9, 1921, in Virginia, Minn., the fifth of six brothers. He grew up on a farm near Syracuse, where he attended the former St. John the Baptist Academy, and joined the Society of Jesus, the Jesuits, when he was 18. He was ordained a priest in 1952.

While at Le Moyne, Berrigan co-founded International House, a student community dedicated to Christian social action. The organization operated until 2004.

Mike Pasquale, a 1990 Le Moyne graduate, was International House president. He worked for many years at Catholic Charities’ former Brighton Family Center and now works at the Center for Community Alternatives in Syracuse. There he helps people with criminal histories re-enter the workforce.

Berrigan’s commitment to justice influenced his career and his activism, said Pasquale. “It takes a great deal of fortitude and faith to keep moving even though things don’t seem to get better,” he said. “You can swap out today’s wars for Vietnam, and what he said is still relevant.”

Renée K. Gadoua is a freelance writer and editor who lives in Manlius. She is a graduate of Le Moyne College, where she served as International House president her senior year. Follow her on Twitter @ReneeKGadoua.