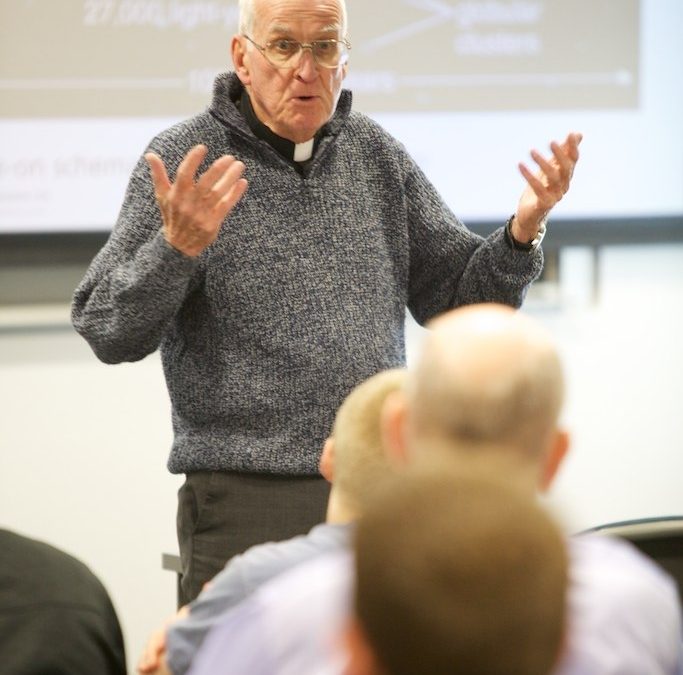 With the release of Pope Francis’ much-anticipated encyclical on creation, “Laudato Si,” the Sun asked several experts for their thoughts on the document. Here, Jesuit Father George Coyne — world-renowned astronomer, former director of the Vatican observatory and current Endowed McDevitt Chair in Physics at Le Moyne College — offers his take.

Catholic Sun: What are your thoughts on Pope Francis choosing to write on the topic of care for creation? Why do you think he chose this topic for his first major document?

Father George Coyne: “His [Pope Francis’] care for creation arises directly from his care for the poor, which he has manifested from the beginning of his papacy.”

CS: What are your initial reactions to the document? What stands out? What were you surprised by? What resonated most?

GC: “This is probably the most challenging encyclical since the great social encyclicals of Pope Leo XIII, “Quod Apostolici Muneris” (1878) and “Rerum Novarum” (1891), and of Pope Pius XI, “Quadragesimo Anno” (1931). It is not doctrinal as such, although it is based on church doctrine, but it is a call to action. The pope is forthright, courageous and unhesitating. Some of the language, at least in the English translation, is so direct as to be almost shocking: “The Earth… is beginning to look… like an immense pile of filth,” “The idea of infinite or unlimited growth… is based on the lie that there is an infinite supply of Earth’s goods…”

CS: Drawing on your particular areas of expertise and experience, why is this document important?

GC: “It is based upon solid scientific analysis of all the data currently available on the Earth’s ecology and in particular on climate change. The science is presented in a direct and understandable way to the general public. This in itself is quite an achievement, since the science involved is quite complex. The pope’s declarations leave no room for an escape from action based on claims that the science involved is inconclusive. The pope is open but clearly not hesitant.”

CS: What should we take away from this document? And how do we put it into action?

GC: “Sustaining the Earth is urgent. There is no time to lose. Each one of us must be informed, take the obvious necessary actions and encourage others to do so. Action at the level of government agencies and international NGOs [nongovernmental organizations] is absolutely necessary but is not an excuse for action at the local level — that means me!”