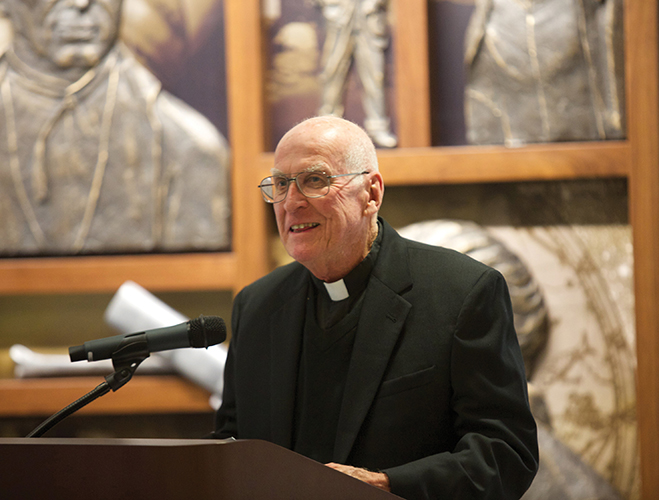 The Le Moyne College community joins with others across the world in mourning the passing of George V. Coyne, S.J., Ph.D., who died on Tuesday, Feb. 11 at Upstate University Hospital in Syracuse following a courageous battle with cancer. He was 87.

Father Coyne, who has been the McDevitt Chair of Religious Philosophy at Le Moyne since 2012, came to the College following his service for 28 years as director of the Vatican Observatory. His expertise in the field of astronomy and his thoughtful views on the science versus religion debate propelled him to worldwide notoriety. He was considered one of the most respected and influential Jesuit scientists in the world.

“We are deeply and profoundly saddened by the passing of Father Coyne,” said Le Moyne President Linda LeMura. “His influence on so many fronts was profound. First and foremost, as an astronomer he was a world-class intellect highly respected by others for his research and scholarship. Le Moyne was privileged to have him here for the past eight years, and he spent the final years of his life doing what he loved – teaching young people about astronomy. He will be missed immensely by his fellow Jesuits, his faculty colleagues, and by everyone at the College.”

He was born on Jan. 19, 1933, in Baltimore, Maryland, and completed his bachelor’s degree in mathematics and his licentiate in philosophy at Fordham University in 1958. He carried out a spectrophotometric study of the lunar surface for the completion of his doctorate in astronomy at Georgetown University in 1962. A member of the Society of Jesus since the age of 18, he completed the licentiate in sacred theology at Woodstock College, Woodstock, Maryland, and was ordained a Roman Catholic priest in 1965.

His research interests ranged from the study of the lunar surface, antecedent to the NASA Ranger and Apollo Programs, to the birth of stars. He has pioneered a special technique, polarimetry, as a powerful tool in astronomical research. With this technique he has studied various objects including the interstellar medium, stars with extended atmospheres and Seyfert galaxies, which are a group of spiral galaxies with very small and unusually bright star like centers. He also studied cataclysmic variable stars, binary stars where one star is a superdense object which is capturing matter from its companion. He also searched for protoplanetary disks about young stars. He has published more than 100 articles in reviewed scientific journals and has been the author and editor of a number of books.

Parallel to his scientific research he has developed an interest in the history and philosophy of science and in the relationship between science and religion. Thus he founded the series of studies concerning controversies about Galileo, entitled: Studi Galileiani. He served as the head of the section on epistemology and science of the Galileo Commission, constituted by John Paul II in 1981. He lectured widely on the results of that Commission and was one of the principal organizers of a series of conferences on the theme of Scientific Perspectives on Divine Action. These conferences, held over a period of 20 years, resulted in the publication of six volumes which sought an understanding of God’s action in the universe from various fields of natural science, including: quantum cosmology, chaos and complexity, evolutionary and molecular biology, neurosciences and the person, and quantum mechanics.