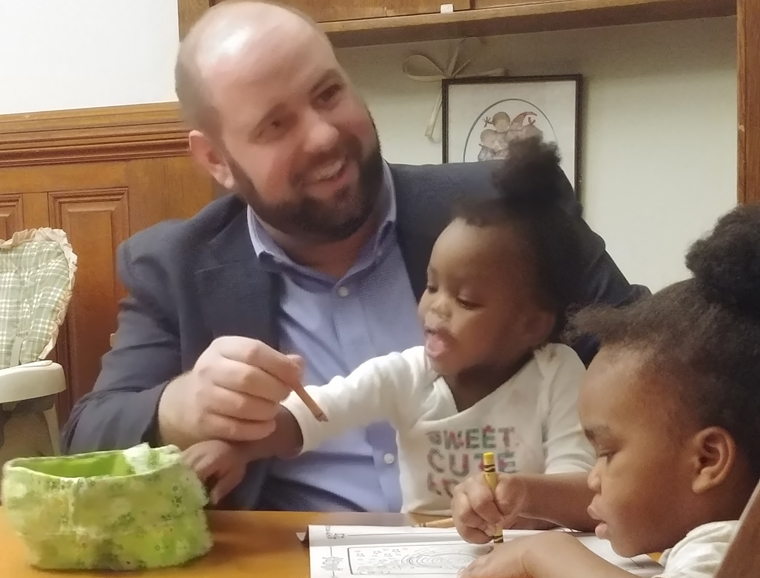 A place of hope shuts out the unthinkable. Asked what would happen if there were no Joseph’s House for Women, Bronson Kopp answered in a low voice, as if to ward off a chilling scenario: “You don’t want to know.”

Thankfully, Joseph’s House, “a loving home for women facing an unplanned pregnancy,” is booming as it nears its fourth anniversary of saving moms and kids: March 19th — the Feast of St. Joseph.

“We had 13 referrals in January,” said Kopp, who in August 2017 became the Syracuse home’s first-ever full-time executive director. Since it opened in 2014, Joseph’s House has hosted 70 women working toward a better life and perhaps more than 100 children who now have a better chance in the world. They live there for up to two years, supported entirely by individual and corporate philanthropy. “It’s a family. It’s a family,” Kopp said.

HEROES OF THE HOUSE

The expectant moms, surrounded by negative influences, come in with little hope, support, or faith, trapped by cycles of poverty, public assistance, abuse, or neglect. They may have mental-health issues, such as Post-Traumatic Stress Disorder, or a past of drug abuse and dependency.

“Some of them just need some love and a place to get their feet under them,” said Kopp. These women need a few heroes and an eloquent champion to work 24/7/365. Filling those roles are a selfless staff of 15, and Kopp, a trained lawyer whose public service goes back to his high school days.

“In my estimation,” Kopp said, “some of the hardest work that can be done is done by the staff in this house.” Working with the moms and kids day in and day out with the complexities of their problems and their situations is “nothing short of remarkable,” he said. His own job, he said, is comparatively easy, “because I get to go out and talk about all the great things we’re doing and share all the good news and build those relationships so that we can help keep this place operating.”

Several days a week, the moms attend life-skills classes. Joseph’s House is helping them to acquire job skills through CNY Works or to obtain their general-equivalency diploma. Two of the moms just started a Dale Carnegie leadership course. The home also helps moms find good affordable housing and daycare. “We have moms we’re helping to get their own apartments; we have a mom that’s bought a house,” Kopp said.

Sometimes the staff wonders what is taking hold with the moms. “We don’t ever close the door on people, even people we have to ask to leave,” Kopp said. “They still reach out to us.”

Kopp loves to hear success stories. One mom wrote: “I want to thank you so much for everything you and Joseph’s House have done for my family. I just had a conversation with my manager’s supervisor that normally I would be so nervous to do and not do. You have taught me so much about communicating and being upfront and it has made my life so much easier and it has helped me be more successful in life!!”

A woman named Dionne, 20, of Syracuse, came to Joseph’s House about two months ago. She has a two-year-old son and another child on the way. Dionne is studying for her GED at Bryant & Stratton College, and Joseph’s House was working on setting up a one-on-one tutor that she needs. The home is keeping her “on track with a positive life,” she said, providing her with a safer environment, and helping her save for her future.

“It’s just unbelievable when they form this community right here,” Kopp said. For example, one day one of the other moms, who has two kids, had to go to the doctor. Dionne was off from school and her son was in outside daycare. Kopp said she told the other mom: “‘I’ll go with you. She’s got two kids, that’s a lot to handle, I’ll help you.’” So they rode the bus together.

The home’s full-time evening resident adviser, Ellen Morrissey, said, “It’s incredibly rewarding to be able to help young ladies who are in difficult positions to make a difference in their lives, and to help them on a daily basis.” She grew emotional as she spoke. “Easy to feel that way here,” Kopp said.

“What we try to do here is plant seeds,” he said. “We’re planting seeds of faith and of hope and of a true love of Christ.”

Kopp himself went through the Rite of Christian Initiation of Adults  and became a Catholic in 2015. He is a native of the North Syracuse and Liverpool area, and he earned a public-service scholarship to St. John Fisher College outside Rochester. He volunteered at an inner-city Catholic School, and he went on four trips to New Orleans to do Hurricane Katrina relief work.

At Fisher he met Father Joseph M. Lanzalaco, C.S.B. (Basilian Fathers), who had served as a death row chaplain at Indiana State Prison. Father Joe witnessed four executions and was kicked off death row because he gave an anti-death-penalty speech at the University of Notre Dame, Kopp said.

He was moved by a story that Father Joe told about a murderer who was executed. The man had been abandoned as an infant, found in a trash can, and raised in a brothel. The day before his execution, he spoke with Father Joe, and the topic of the Blessed Mother came up.

Kopp recalled: “Father said, ‘What do you know about the Blessed Mother?’ And he said, ‘Well, I never had a mother, so I figured if she’s Jesus’ mother she’d be my mother too.’” Father Joe gave the man a rosary, and the man said he already knew how to pray it.

The story inspired Kopp, who graduated from Fisher with a degree in history and political science. Then he came back to Syracuse and earned his law degree at Syracuse University. He practiced law for four and a half years at Mackenzie Hughes LLP. He was progressing well and he had some good wins in defense litigation, he said. “But I knew deep down that God was calling me to do something different.”

His continued love for community service drew him to join the board of Joseph’s House around December of 2015, and he and his wife, Anna, got tears in their eyes listening to the testimonials of women who benefited from the charity.

When the possibility of serving as executive director was mentioned to Bronson, Anna was four months’ pregnant with their second child. She was two years out from the end of her MBA program at Syracuse University in addition to working full time there. But the couple felt that they had to be involved with Joseph’s House. And all roadblocks fell.

Now Bronson works to promote Joseph’s House, which receives no government funding. He and Anna, who is director of administration for the chief information officer at Syracuse University, have two sons: Jonah, three and a half, and Connor Joseph (after Father Joe), six months.

Asked how he applies the principles of Father Joe, who died in 2015, Kopp said: “It’s on a daily basis. … We have moms that it would be very easy for us to pass judgment on. … We try not to operate that way.”

Like the late Father Joe, Kopp believes in a ministry of presence. “Every time I’m in this house during the day,” he said, “I come up and stop in our daycare. Because it’s those kids. I gave a tour this morning to some folks. And they said, ‘Oh, no, no, we don’t have to go upstairs and see the kids’; I said, ‘No, you do.’ I said, ‘Because this is why we do what we do.’ I said, ‘This is what fills my tank at the end of a long week, as you come up here, and you see these smiling kids. … It doesn’t matter how tired I am, they want a high-five, and they want to give you hugs, and they want to see ya.’”

It was getting along toward 6 p.m., and the downstairs resounded with the squealing and babbling of children. It was time to wrap up the storytelling and put away the crayons. The residents gathered at the long table for a dinner of spaghetti and meatballs. They said grace and then applauded. Family-style, Kopp said.