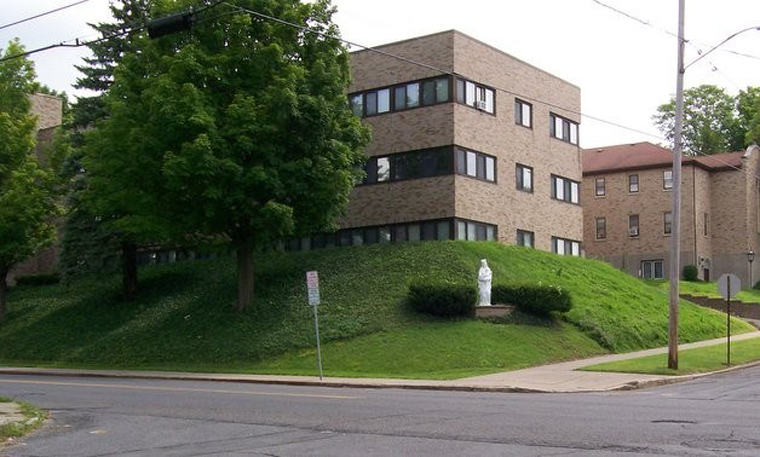 Blessings will flow anew from the former Dominican monastery in Syracuse.

Taking advantage of “an offer we couldn’t refuse,” Joseph’s House for Women in Syracuse has purchased the site that covers “a full block from Court Street to Danforth Street,” reported Bronson Kopp, Executive Director of Joseph’s House.

“This could provide a whole host of new residents that we can serve,” he said.

Joseph’s House, operating since 2014 in a house that it owns outright not far from the former monastery, says it provides “a safe home and family environment for moms and babies who find themselves homeless due to a wide variety of circumstances.”

Operations will continue in that house, where mothers and children are provided with a private room and a family living environment complete with nursery, kitchen, and computer-equipped study, along with dining, living, and recreation rooms. The home is staffed 24/7 by trained professionals who give the mothers the structure, responsibility, and skills they need to achieve independent living.

Joseph’s House closed with the Dominican Sisters on the former monastery about two weeks into the coronavirus pandemic. The property has two standalone homes that will be used to rent to moms as they transition out of the program.

‘This building is massive’

The main building has capacity to house an additional 20 women over time as Joseph’s House continues to grow and build its staff. There is space for offices and also for additional instruction in life skills, such as a sewing lab and an art studio, Kopp said.

For more than 90 years, he noted, the monastery, designed to house 40 women in a communal-style setting, was the site of perpetual adoration and daily Mass.

“Our goal is to honor and maintain that sacredness,” he said, “and the … specialness of the chapel and be able to offer this” as a place for the community still.

So far, Joseph’s House has moved its business office into the former monastery from its rental site at the convent at St. Vincent de Paul Church on Vine Street in Syracuse. The tentative timeline for the women to move into the former monastery is sometime in the next year. For now, Kopp is working on obtaining permits from the city and getting the place cleaned up, painted, and furnished.

“Look at the blessing we’ve been given by these sisters,” Kopp said, adding he wants to “take the time to really make sure we’re doing this right and well. … We don’t take any federal money or any state money or anything like that, so all the funds we need to run the place, we have to raise.

“And we’re talking about doubling or tripling our staff over the next three to six years; that’s going to take a substantial amount of money to do, and we’ve been successful, including even during the pandemic; last year was a record year for fundraising for us, thanks to some pretty generous foundations and grants that we’ve been able to do. We’ve been able to consistently grow and expand, so that’s what we … hope to continue doing.”

When the Dominicans left in March 2020, Kopp said, their numbers at the monastery were in the single digits; some of them relocated to Girard, Ill., where they are building a new monastery.

The sister that Kopp dealt with in the sale “had developers interested in this property and those sorts of things,” he said, “but nobody was going to look at this property and treat it with the dignity and respect and the sacredness that we plan to, and are doing. And that’s directly from Sister. She said …, ‘I don’t want to sell it to them. This was a sacred place, and you guys intend to keep it a sacred place.’”

In addition to information about volunteering and making donations of money or supplies, the Joseph’s House website (jhfw.org) also includes Success Stories of residents, including this one:

The mom “came to us in the summer of 2015 and was with us almost a year. She was highly motivated and worked throughout her pregnancy to save money so she would be able to secure a home for her and her son. She is now a very successful salesperson, off public assistance, and recently purchased her own home.”

Asked how the pandemic has affected the house owned by Joseph’s House, which has room for up to 10 women to stay, Kopp said:

“It’s not unlike anywhere else; we’re dealing with it every day. We’ve had moms that have needed the quarantine and now that they’re back working and those sorts of things.” The home takes precautions such as masks, but he said it’s been harder to get volunteers to come in. “But we’re making it work,” he said, “we’re getting there.”

There definitely has been a downturn in calls to the home because of the eviction moratorium, he said, “so nobody’s getting evicted. Nobody’s becoming homeless.” So most of the calls now, he said, involve women who are in undesirable living situations.

When the eviction moratorium ends, he said, “there’s going to be a lot of people who become homeless, and we’ll be ready.”