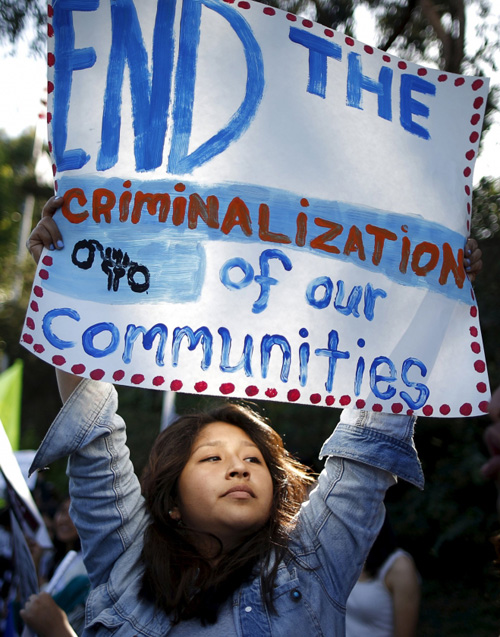 WASHINGTON (CNS) – A federal judge Aug. 21 gave the Obama administration 60 days — until Oct. 23 — to release the hundreds of immigrant mothers and children being held in locked detention centers.

Central California District Court Judge Dolly Gee reiterated her order of a month earlier, in which she said a long-standing court settlement over treatment of juveniles in immigration custody is violated by the government’s policy of detaining mothers and children while they pursue asylum or other ways of remaining in the country.

The administration had appealed Gee’s order, repeating many of its original arguments for why it should be allowed to detain families and saying a system is already in place to reduce how long the families are held. Gee’s response clarified some parts of her July order, and in other places criticized the government’s appeal.

For instance, she said it was “speculative at best, and, at worst, fear mongering” when the government argued that her orders to release the families “could heighten the risk of another surge in illegal migration across our Southwest border by Central American families, including by incentivizing adults to bring children with them on their dangerous journey as a means to avoid detention and gain access to the interior of the United States.”

The order requires the government to release the children who are being held in for-profit detention centers in Texas and Pennsylvania “without unnecessary delay,” first to a parent (including the one with whom they were detained) or another family member. She said the families “shall not be detained … in unlicensed or secure facilities that do not meet the requirements” of a 1997 settlement, Flores v. Reno, that set out standards for the conditions under which Immigration and Customs Enforcement may detain minors.

The accompanying parents of minors held by ICE shall also be released, Gee said, “unless the parent is subject to mandatory detention under applicable law or after … the parent is determined to pose a significant flight risk, or a threat to others or the national security, and the flight risk or threat cannot be mitigated by an appropriate bond or conditions of release.”

Gee’s order specified criteria for the government to monitor a long list of conditions under which minors are held, including food, water, temperature control, supervision and contact with family members.

More than 68,000 women and children from Central America were apprehended as they crossed the U.S. border at Mexico last summer, a 360 percent increase over the previous year, according to Border Patrol statistics. There also was a surge of unaccompanied minors, to 68,000, up by 77 percent from the previous year. Significantly fewer people in both groups have been apprehended at the border this year, due at least in part to increased enforcement of immigration laws in Mexico.

Under the conditions of the Flores settlement, unaccompanied minors are released to relatives or put in the custody of the Office of Refugee Resettlement of the Department of Health and Human Services. From there, they are either housed by licensed child care organizations or under formal foster care. Fathers who arrived with young children either were released together or the children were put into the HHS system if the fathers were detained.

But thousands of mothers and their children were sent to detention centers, some for several months, even after most of them had met the first legal hurdle for being granted asylum to remain in the United States. A series of reports in the recent months by legal, human rights and religious organizations criticized the detention policy and the conditions under which the families are held.

Among them, Migration and Refugee Services of the U.S. Conference of Catholic Bishops in conjunction with the Center for Migration Studies, in May called for the centers to be closed, drawing on the feedback of several bishops who visited the detention centers in Dilley and Karnes County, Texas. The Women’s Refugee Commission, The American Bar Association’s Commission on Immigration and Human Rights First also sharply criticized those centers and a third one in Berks County, Pennsylvania.

Jeanne Atkinson, executive director of the Catholic Legal Immigration Network Inc., or CLINIC, welcomed the order. In an Aug. 24 statement, Atkinson said “today is a victory for the children that we are assisting inside the detention center in Dilley, Texas, through our dedicated CLINIC attorneys, our tireless volunteer network and the CARA Pro Bono Project.”

Atkinson said that while the litigation has proceeded, the Department of Homeland Security “has detained and separated many vulnerable immigrant families … and continues to detain mothers and children and deny them due process as we speak.”

She urged DHS to end the practice of family detention altogether and replace it with “more humane and less expensive alternatives to detention such as case management with legal services.”

An Aug. 24 statement from DHS said that “while we continue to disagree with the court’s ultimate conclusion,” Gee’s clarifications of Aug. 21 will “permit the government to process families apprehended at the border at family residential facilities consistent with congressionally provided authority.”

The statement said DHS “will continue to screen family members’ claims as expeditiously as possible, while ensuring that their due process rights are protected.”

Gee’s order clarified that that while as a general rule minors should not be detained by DHS more than five days, there are some exceptions, such as an emergency or an influx of minors into the country. The Flores settlement defined an influx as more than 130 minors eligible for placement in a licensed program. She said in such conditions detention by the government could exceed five days as long as the minor is placed “with an authorized adult or in a nonsecure licensed facility … ‘as expeditiously as possible.’”

She said that under extenuating circumstances, “if 20 days is as fast as defendants, in good faith and in the exercise of due diligence, can possibly go in screening family members for reasonable or credible fear,” then the recently implemented policies of DHS may fall within the parameters of the Flores settlement.