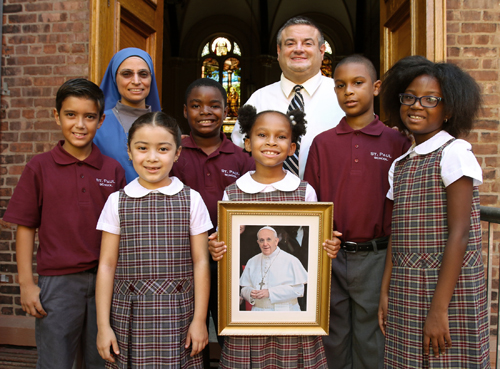 NEW YORK (CNS) — One wants to ask Pope Francis what it’s like to live with one lung. Another wants to know what kind of cellphone he has and since he’s so humble, he probably has a flip phone, he suspects.

Kids from four Catholic schools in New York will welcome the pope Sept. 25 to Our Lady Queen of Angels in Harlem, when they’ll show him community service projects they’re working on, ask him questions and perhaps squeeze in a hug.

By now, the group of school kids who attend Our Lady Queen of Angels, St. Ann, St. Paul and St. Charles Borromeo Catholic schools in New York seem used to answering media questions about what they’ll ask and how they feel about meeting the pope, but the excitement about meeting him was still building.

“It’s cool to be meeting the pope when you’re only 8. This is crazy,” said Noah Rodriguez, of the Bronx, a fourth-grade student at St. Ann School.

He wants to ask the pope whether he watches any modern movies.

Ngueubou Kamwa, a fourth-grader at Our Lady Queen of Angels, said, “When he steps into New York City, I want to know, how does he feel, is he ‘I’m excited that I’m here’?”

Her schoolmate Nicholas Marronaro, of Brooklyn, wants to know why he got his lung removed and if he collects stamps, does he collect stamps that have his image on them?

“Kids, it’s the way they see the world,” said Joanne Walsh, principal of Our Lady Queen of Angels when she heard that one the kids wanted to ask the pope that if he ever returns to New York, could they go see the Yankees together and take him on a New York City tour?

The school, Walsh said, has for centuries been a “gateway for newly arrived immigrants” to the city, including the Germans, Italians and Irish. These days it serves children from families that hail from places such as Central and South America and Africa, she said.

Catholic schools such as Our Lady Queen of Angels have long served families for whom faith, academic excellence and character development are important, she said.

The small school in Harlem has about 300 students, and it’s the ideal place for the pope to see Catholic education at work and how it serves immigrants, academically, spiritually and otherwise, Walsh said.

Taking a page from his teachings, children will show him some of the projects they’re working on, such as recycling, also a project that involves collecting pajamas for babies in the city who need them (in honor of the baby Jesus), serving Thanksgiving and Christmas dinner to the elderly, and planting at home and at church to help the environment.

Given the encyclical, the pope’s catechetical teachings, and the school’s role in serving immigrant communities, Walsh said, the school as place for the visit was “the right pick.”