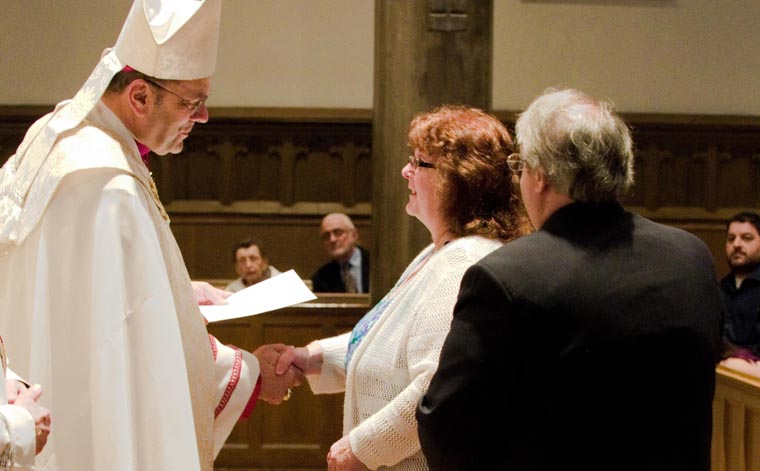 A lay minister must have not only a generous heart but also a good ear.

In a pastoral-care role, for example, the lay minister must “be able to actually hear not only the words, but the emotion under the words,” said Father Charles S. Vavonese, director of the diocesan Formation for Ministry Office.

The emotion under the words Oct. 9 was joy.

More than two dozen people from around the diocese received their Certificates of Commissioning as lay ministers from Bishop Robert J. Cunningham at the Cathedral of the Immaculate Conception in Syracuse.

One of them was Maureen L. Walsh of St. Patrick’s Church in Binghamton. Celebrating outside the cathedral with family members who drove hundreds of miles to witness her commissioning, she said, “The tears were there, the tears.” They were tears of joy.

Walsh beamed when she received her certificate. Asked if she brings that big smile to her ministry too, she laughed and said, “It’s the Irish.”

“The Formation for Ministry Commissioning Ceremony is the culmination of two years of spiritual, academic, and personal development of those who are seeking to be lay ministers,” Father Vavonese said.

They begin with their pastor’s endorsement, and then they participate in nine courses and attend workshops and retreats. At the same time, Father Vavonese said, they work in a ministry at their parish under the supervision of their pastor or a supervisor designated by the pastor.

“The program is amazing,” Father Vavonese said, “in terms of the transformation of the people as they go through the program. They relate exceptionally well to each other.”

The lay ministers may work at a parish food pantry; pray with people; talk with people who have left the Church and are coming back; or visit the sick and the dying.

“I am always uplifted by the lay ministers’ sense of commitment to the mission of the Church within their parishes,” Father Vavonese said. “We’ve got great people. … They’re special to the Church, they’re special to the parishes; because as we have fewer and fewer priests, they’re able to assist in many ways. There might be someone who sits with people who have lost a relative and helps to plan the funeral.”

Walsh appreciates her involvement as a lay minister. “I take Holy Communion to the hospital,” she said. “And I have had people look at me and say, ‘God sent you to me today.’ It’s an experience I would not have had. They look right at you.”

She is also a facilitator in the ChristLife evangelization program, and she has been asked to join the “amazing parish-committee team that St. Patrick’s has.”

Also among those receiving certificates was Jeanette Romanowski, who serves at St. Malachy Church in Sherburne. She was recommissioned for another three years.

In an email, Romanowski said, “I feel that I have been doing the same work for the church as always but continuing to add responsibilities by making rosaries, assisting our religion director, and planning the liturgical classes for the children to coincide with the liturgical year. I will be assisting our pastor with what he asks of me. Responsibilities I had before were evangelizing to the deaf people and encouraging them back to the Church. I have taught classes for the children for 14 years.”

Asked how important her ministry is to her, she wrote, “I feel it is very important as Our Lady’s anniversary [Our Lady of Fatima] is 100 years in May 2017. I continue to pray for people to come back to the Church and realize that God is real. We need to pay attention to our Lord.”

Mary especially enjoyed the Collaborative Ministry course that she took during her ministry formation. Msgr. John P. Putano is the parish administrator, but the parish does not have a resident priest, Mary said. Therefore, a lot of people want to help the parish be successful.

The Collaborative Ministry course helped her to address the team concept. “I feel we’re now at a good point where we’re working together,” she said.

During the course work, Mary benefited from meeting people from other parishes. They shared ideas on how to get new members to register in the parish.

One solution they came up with is having new people fill out a form in the bulletin and then dropping it into the collection basket. “We’ve had a lot of success that way,” Mary said. She also writes a little column in the bulletin each week and shares what she learned in her classes.

Celeste M. Snyderman of St. Paul’s Church, Rome, delivered an address during the Commissioning Ceremony. She recalled discovering mercy at her very first class in her Formation for Ministry. Not wanting to be late, she arrived an hour early. So she left to get some food, got lost, and ended up being 15 minutes late.

“The instructor told me to come in and have a seat,” she said. “I was overtaken with fear at that point but stayed for the class. There was one person in the class that reached out to me and made all the difference; he was very welcoming and made me feel like I belonged. Each week I returned and felt more comfortable.”

In her ministry, Snyderman brings Communion to people who are homebound and people who are in the hospital. She has also worked with people who have been away from the Church. One person was away for 38 years, she said, but now “she’s doing fine; she goes to Mass every week.”

It’s a story of triumph, but the newly commissioned lay ministers received advice about that from the homilist, Father Jason Hage, Parochial Vicar at Holy Family Church in Syracuse.

“Always remain humble,” he said, “and all will be well.”