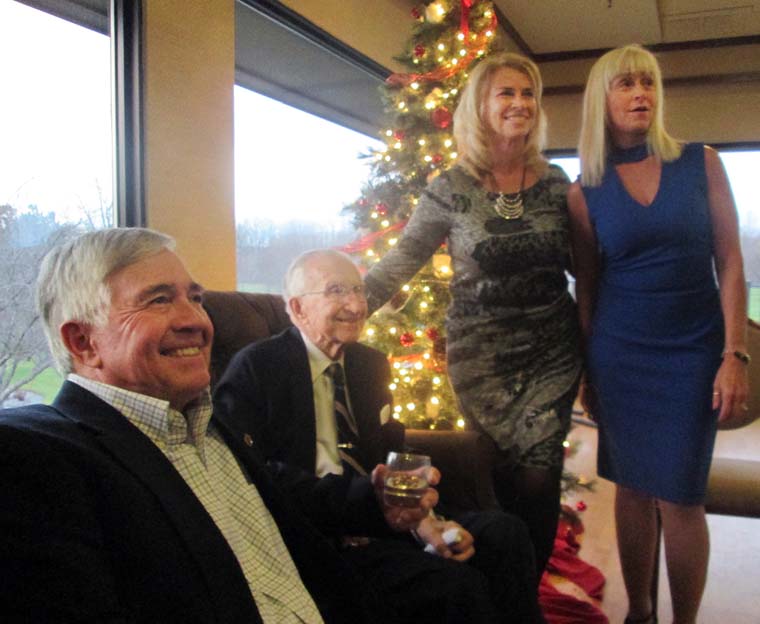 Dozens of fans salute Mr. Pesane at his birthday party

Manlius — Jim Pesane figured the scene jibed nicely with the majesty of his father.

“He was like a pope having an audience with his congregation,” Jim said. “I mean people were coming in and just standing in line to greet him and to wish him well and to give him a big thumbs-up for living as long as he has.”

On Dec. 2, his 100th birthday, Luke Pesane sat in a wide coffee-colored leather chair next to a Christmas tree wrapped in white lights at the Cavalry Club, where he played golf for decades. Dozens of party-goers couldn’t wait to sit in the adjoining leather chair and gaze upon him, as if he would to reach into his pocket and sprinkle them with longevity dust.

Outside the windows of the clubhouse were fresh gouges in the grass on the 10th tee: either the divots of a late-season golfer or, given the magic of honoree Luke, the skid marks of early-arriving reindeer.

Luke’s smile is Santa-like, without the beard, and he looks a little like legendary UCLA basketball coach John Wooden, who lived to 99 and was alleged to be a wizard of sorts.

Could there be longevity powder? Secrets of the centenarian?

The breathless audience waited as Luke, a longtime parishioner at Immaculate Conception Church in Fayetteville, moved from his “papal” throne to a humbler chair in the middle of the room. His loving attendant of the moment, over to his right, was his daughter Susan Korzeniewski. A pointy handkerchief sat classily in the lapel pocket of Luke’s dark blue suit, and he held another hankie in his hands.

‘A lot of it is attitude’

“I’ve had a great life,” Luke told his admirers. “And people ask me, ‘What’s your secret?’ There’s really no big secret; a lot of it is attitude, the will to live, the interest in what’s going on. And, you gotta be lucky too: if you don’t have any life-threatening problems. So I’ve been lucky.

“I tell everybody: You can’t get to 90 without having some health issues. The main thing: Do something about it. Get the right doctors and the help you need, the medication you need. I don’t know what else to say. Thank you, thank you, thank you.”

A Syracuse University graduate and a veteran of the Air Force, Luke worked in sales and then opened his own business as a headhunter, conducting executive searches. He retired more than three decades ago.

As his big birthday party approached, Luke got sick with pneumonia. “He had a miraculous recovery, he bounced back, he really wanted to make it to one hundred,” said Jim, of Brewerton.

“And he wants to continue his life as it’s always been: meeting people, talking to people, driving his car. His license expired today and he wants to renew it so that he can continue to drive. We have other thoughts about that, but that’s for another discussion.

“As far as his future goes, it looks very promising; I think he could make it for another … ten years maybe. His health is there; I mean he’s a strong guy and he’s committed to living a long life.”

Sharpest mind in the room

“I think it was just the way he lived; he always just took really good care of himself,” Jim said. “He was big into supplemental health, things like that. He took a lot of supplements, he took a lot of organic things, and he was just very health conscious, especially in the last 30-40 years. …

“Here’s a guy who remembers everything,” said Luke’s buddy Bob Ungerer, who traveled from Albany with his wife, Sue. Luke was Bob’s first boss, in 1961, at Moore Business Forms.

Bob said, “This is the first 100-year-old man I ever met in my life … and the secret is attitude. The secret is positive attitude. This guy, whatever he sees, he sees positive out of — no matter what. If he fell, he got up.”

“He takes 30 vitamins a day,” Bob said. “He takes … Vitamin E. He takes Vitamin D. He takes selenium. You take all this stuff and look what you get.” Everybody laughed while taking note of the vitamin names.

Bob led the toast, and everyone sang “Happy Birthday,” played on the electric organ by Luke Pesane fan Tom Reitano, of Fayetteville.

At one point during the two-and-a-half-hour party, Jeff Gelormini, of Buffalo, handed his phone to Luke, his great-uncle. It was Jeff’s sister Susanne Gelormini calling from Milan, Italy. “He was almost in tears,” Jeff said. They talked for perhaps five minutes. “He was very happy to get that call.”

Luke and Ruth’s daughter Susan, their youngest child, lives in Liverpool. She is a seven-time past North American Hobie Cat sailing champion.

Susan said: “We just feel so blessed and lucky that he made it to one hundred and just so happy; he’s such an amazing guy — teaches me something every time I’m with him.”

One such lesson is “treat your neighbor as you would want to be treated.”

‘I think he’s sent from God’

The centenarian’s helpfulness goes beyond neighbors. For six years in his 90s, he served as a mentor to students at the Syracuse University Whitman School of Management.

That’s what he thrives on: helping other people, said his daughter Patricia Burgess, who lives outside Detroit.

“He had a couple of friends that went blind,” she said. “He helped them do things on their computer. He helped them get Braille, get books on tape. He’s taken people for dialysis treatments up at the VA. He’s driven them. I mean, in his 90s, that’s what he did. …

“There was always a friend that needed something, and Dad was there for them. And now he’s outlived them all, because he has very few friends left. Most of his male friends are gone.

“I think he’s been reborn also,” she added. “I think he’s sent from God. I think he’s sent from God. I think that he is here on a mission to do more work. Because we really thought we were going to lose him about four, six weeks ago, and he recovered so fast; and it was a miracle — really was a God thing. I kept saying: ‘This is a God thing.’ He’s here because I think he needs to set an example to everyone; I mean, you can see by the amount of people that are here that love him.”

Everywhere he goes, Patricia said, Luke makes friends. “People want to be with him; they want to touch him. They want to know what his secret is.

Luke’s birthday presents included a Syracuse University cap autographed by basketball coach Jim Boeheim. As Luke sat in the center of the crowd and enjoyed his cake, his granddaughter Erika Korzeniewski approached.

The 22-year-old is a senior at SUNY Binghamton studying Spanish and psychology.

She told Luke: “You are the smartest man I’ve ever in my whole life. … And I am so honored to be your granddaughter and share a birthday with you, and carry on your mission.”

Erika knelt down and looked him in the eyes, and he smiled. “We’re gonna help … a lot of people,” she said. “You’ve helped so many people and I’m going to do the same … thing.” She kissed him and put her head on his shoulder.

Luke looked at the crowd and said, waving his plate of cake:

“If you didn’t know it, it’s her birthday too.” 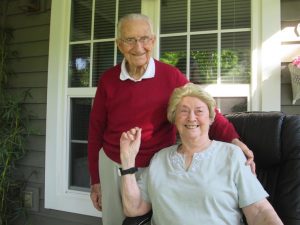 Luke Pesane says of his wife, Ruth, “She’s always smiling all the time.” They met in the mid-1930s at a dance hall in Syracuse. Ruth has always liked the song “Stardust.” “You’ve got to be thankful for what you’ve got,” says Luke, who turns 100 in December. “And I am.” – SUN ARCHIVE | TOM MAGUIRE

Luke was very devoted to Ruth, 97, and he regretted that she could not attend his birthday party because she had a cold and needed to rest. On Dec. 7, she had a stroke, and she died Dec. 8. Luke noted that they had dated for three years before World War II broke out, so they had actually been together for 78 years. “The Lord allowed her to live all these years. … We have quite a story, when you think about it,” Luke said. “It’s been such a long ride.”

For eight years, Luke and Ruth lived at The Nottingham in Jamesville. They recently moved to Menorah Park in Syracuse so that Ruth could receive nursing assistance.

Ruth grew up in Solvay and owned Ruth’s Style Shop, where she made wedding gowns and specialty dresses, and she worked for Syracuse Pottery for several years and participated in craft shows. She was a past president of the Plymouth Garden Club. A longtime member of the Cavalry Club in Manlius with Luke, she was a nine-hole golf champion there. For many years, she volunteered at the Sisters of St. Francis Convent in Syracuse. Ruth made items for the sisters’ bazaars, Luke said. “She had a lot of talent; she used to make hats. … She had a lot of talents.”

With Luke, Ruth belonged to Immaculate Conception Church in Fayetteville since 1951. The Pesanes were celebrated as the longest-married couple who signed up for the Syracuse Diocese’s World Marriage Day Mass in February.

The couple met in the mid-1930s in a dance hall on Butternut Street in Syracuse, across the street from the Haberle Congress Brewing Co.

“I went to a dance hall one night with my friends,” Luke recalled, “and she was there dancing and I knew she was my girl. So I said to my friends, ‘I’m going to marry that girl,’ and I did. … She was quite a dancer.”