Life is not a burden; it should be lived with passion, pope says 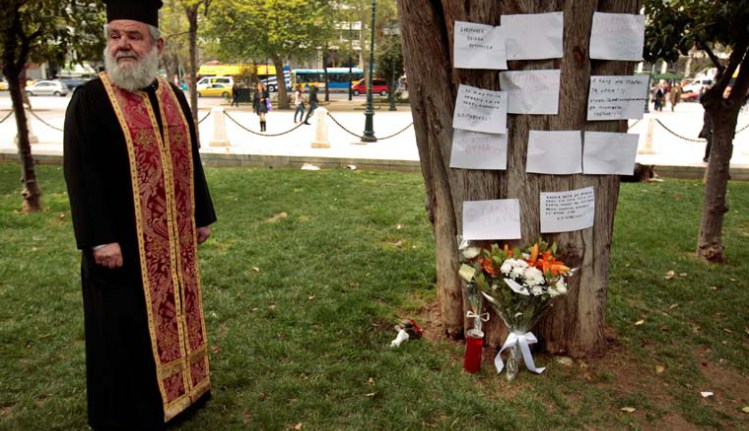 A Greek Orthodox priest stands at the spot where a man overwhelmed by debt committed suicide in 2012 at central Syntagma square in Athens. People, especially the young, need to live with passion to persevere and not see life as a burden, Pope Francis said. (CNS photo/Yorgos Karahalis, Reuters)

VATICAN CITY (CNS) — People, especially the young, need to live with passion — the passion to persevere and not see life as a burden, Pope Francis said.

“When I read news about young people committing suicide — and there are many,” the pope said he asks himself, “What happened here?”

“I can say at least that ‘passion’ was missing in that life; someone did not know how to sow a passion for living,” which meant life’s difficulties were not confronted with this passion, he said in off-the-cuff remarks Sept. 5. The pope was meeting with a delegation of motorcyclists racing in an early September grand prix event along Italy’s Adriatic coast.

He told members of the group to become “infected with passion. This world needs passion.”

“Live with passion and not like someone who carries life like a burden,” he said. “Passion is moving forward.”

While the word “champion” usually is associated with the world of sports, the pope noted the delegation’s use of the phrase “champion of life” in its greeting to the pope.

A “champion of life is the one who lives with passion,” who lives life fully, he said.