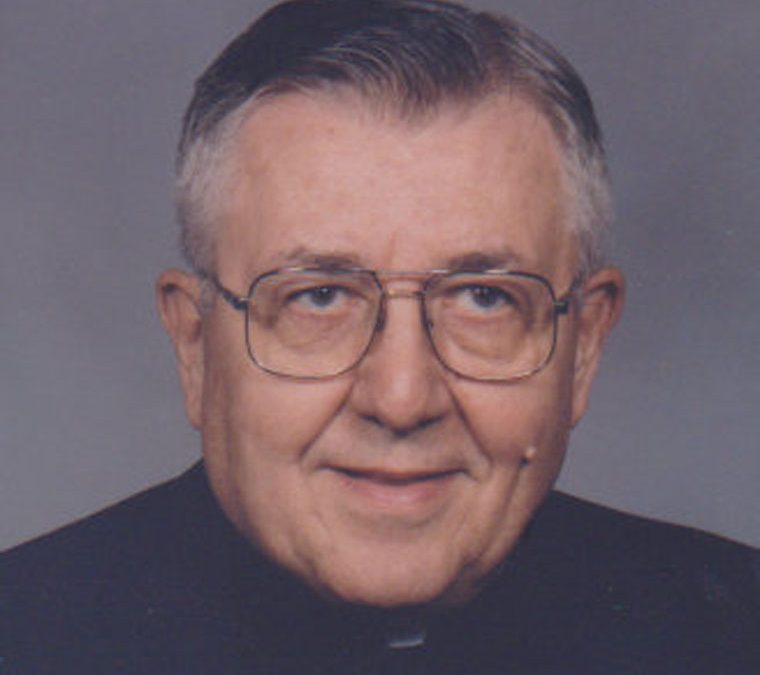 Friends and family recently joined together in prayer for the repose of the soul of Father John H. Comeskey at Our Lady of Lourdes Church in Utica. Father Comeskey passed on Nov. 28 after nearly 60 years as a devoted diocesan priest. His Mass of Christian Burial was celebrated Dec. 2 by Most Rev. Robert J. Cunningham. Many of Father Comeskey’s priestly brothers joined in the celebration of his life.

Father Donald H. Karlen gave the homily, in which he said Father Comeskey left very specific instructions for his funeral in very neat, excellent long hand. However, he did not select the readings and in doing so “put them [his family] on the spot.”  Yet, he said, the readings came together in a way that clearly described Father Comeskey and his way in the world.

John’s Gospel, 10:11-16, discusses that a “good shepherd lays down his life for his flock,” Father Karlen said, and Father Comeskey’s “flock was spread across the diocese and took many forms.”

Father Comeskey was ordained on Feb. 2, 1956, following his religious education at St. Andrew’s Minor Seminary and then St. Bernard’s Major Seminary, both in Rochester. From his first appointment to St. John’s Church in Oswego in 1956, where he also taught religion at Oswego Catholic High School, to his first pastorate at St. Stephen’s Church in Marathon in 1971, to his hometown in the Utica area from the 1990s forward, Father Comeskey led his parish flocks.

His mission extended to caring for those who care for the communities. Throughout his ministry, he served as chaplain to Oneida County and St. Joseph’s nursing homes, St. Elizabeth’s and St. Luke’s Hospitals, as well for the Utica Police Department and the New York State Veteran’s Home in Oxford. Father Comeskey was also a member of the William E. Burke Council #189 Knights of Columbus.

The second reading, 2 Timothy 4:6-8, says, “I have competed well; I have finished the race; I have kept the faith.” Father Comeskey “exuded a joyfulness   of heart and his ministry was to bring God to men and men to God…. My God, what a life,” Father Karlen described. He said Father Comeskey would joke that he was in sales, not in management.

Father Comeskey was also a poet, Father Karlen pointed out. “Father John’s nieces and nephews knew that his poetry was fed by faith, and in his routine of saying or attending Mass and saying the rosary several times a day.”

When Father Karlen questioned the family on why the first reading, Isaiah 43:1-7, was chosen, they responded, “It seemed to us that was the one he’d want us to remember the most.” In it God’s people are comforted: “Fear not, for I am with you; from the east I will bring back your offspring, from the west I will gather you. I will say to the north: Give them up! and to the south: Do not hold them! Bring back my sons from afar, and my daughters from the ends of the earth.” Father Karlen added that “love will give us the strength” to grieve Father Comeskey’s passing.

In lieu of flowers, remembrances in Father Comeskey’s name may be made to Notre Dame Schools at www.notredameutica.org.

Dyann Nashton is a writer from Oneida, N.Y., in the Eastern Region of the Diocese of Syracuse, and associate director of development for Notre Dame Jr./Sr. High School in Utica.