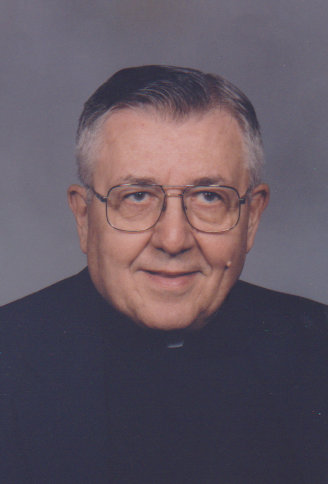 Father Comeskey was born in Utica, N.Y., the son of the late David and Gladys (Aldridge) Comeskey. He was educated at Our Lady of Lourdes School and St. Francis de Sales High School, Utica, and in preparation for the priesthood, he attended St. Andrew’s Minor Seminary and St. Bernard’s Major Seminary, both in Rochester, N.Y. He was ordained to the priesthood at the Cathedral of the Immaculate Conception in Syracuse by Bishop Walter A. Foery on Feb. 2, 1956.

After ordination, Father Comeskey was assigned to serve at St. John the Evangelist Church, Oswego, N.Y. Besides his regular parish duties, he taught religion for six years at Oswego Catholic High School. Later, he served at St. Francis de Sales Church, Utica, and also was chaplain of the Utica Police Dept. He then served at St. Paul’s Church in Rome, N.Y., and while there, was chaplain at the Oneida County Hospital and Home.

His first pastorate was at St. Stephen’s Church, Marathon, N.Y., with a mission church at Cincinnatus, N.Y. From there, he was transferred to St. Joseph Church, Oxford, N.Y., where he also served as chaplain at the New York State Veteran’s Home. His next assignment was St. Patrick’s Church, Oneida, N.Y., and then St. Mary’s Church in Clinton, N.Y.

In July 1996, Father Comeskey was appointed part time chaplain at St. Elizabeth and St. Luke’s Hospitals and later became full time. He was assigned to live and work weekends at St. Agnes Church, Utica.
Father was a member of the William E. Burke Council #189 Knights of Columbus.

In lieu of flowers, remembrances in Father’s name may be made to Notre Dame Schools at www.notredameutica.org.

The Comeskey family extends their gratitude to nurses and staff of Utica Rehabilitation & Nursing Center for the care and compassion shown to Father during his stay.