Lily of the Mohawks and symbol of hope 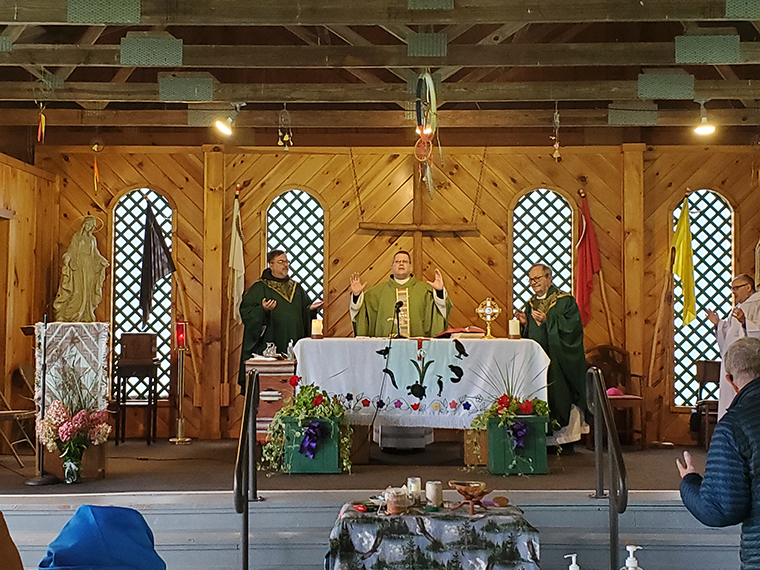 Ten years ago, in October 2012 and more than 300 years after her death, Kateri Tekakwitha was canonized a saint by Pope Benedict XVI. She was the first American Indian to be recognized as a saint by the Catholic Church. Also, she was the second woman with ties to Upstate New York, joining Saint Marianne Cope who was also canonized that day.

Saint Kateri was born in 1656. Her mother was Algonquin, and her father was a Mohawk chief. When she was 4 years old, a smallpox epidemic left Kateri orphaned and partly blind and disfigured. She was adopted by her two aunts and her uncle who was a Kanienkehaka chief. When the smallpox epidemic subsided, Kateri and her people abandoned their village and resettled five miles away on the north bank of the Mohawk River. She lived most of her life near Auriesville, N.Y.

When Kateri was 10 years old, the French won the battle with the Iroquois and a peace treaty permitted Jesuit priests to access the Mohawk villages in order to convert the residents to Christianity. Kateri was fascinated by stories of Jesus Christ and wanted to become a Christian. At age 20, Kateri was baptized by a French missionary visiting her village in present-day Fonda, N.Y. The spring that brought forth the water used to baptize Kateri is located at the Saint Kateri National Shrine and Historic Site in Fonda. Melissa Bramble is the director of operations at the Shrine.

She reflected on the similarities and hardships that Kateri faced versus the ones we, as a country, face today. “I came to this epiphany in 2020 when we were in the pandemic,” said Bramble. “We were in the midst of a pandemic and a time of significant upheaval in our country. We have never been through anything like this. But Kateri had been through a virus outbreak that killed her parents and brother and left her permanently disabled. There was also an enormous amount of political upheaval during her time as well. Her community had to move several times because of raids from the French.”

Bramble said the events Kateri went through deepened her faith and strengthened her spirituality. “If we are looking for an example of how to get through these troubling times with grace and compassion, there is no better example than Saint Kateri.”

In the early 20th century, the Mohawk Nation contributed to building many of the iconic skyscrapers that dominate the Manhattan skyline. The ironworkers, known as “Skywalkers,” traveled between northern New York State and southeastern Canada to earn an income to support their families. Syracuse became the halfway point for those traveling to New York City for work.

When she was beatified in 1980, Father Carey approached the parishioners and asked if they would consider dedicating the daily Mass chapel to Kateri. “So, we took a vote, and almost 90 percent of the parishioners agreed,” said Father Carey. “I was only the cheerleader. They did the whole thing.” In June 1981 Auxiliary Bishop Thomas Costello dedicated the Kateri Tekakwitha Chapel.

Father Carey learned much about the Native American culture. “When I was assigned to St. Lucy’s, I was just finding my way. You have to be very careful when crossing cultures, to not insult anyone on either side,” he said.

While most of the Native American parishioners at St. Lucy’s are gone now, Father Carey remembers his time there with pride and gratefulness. “It was a great time for me. I learned so much from them,” he said. He was honored to be able to attend the canonization at Saint Peter’s Basilica along with 350 other people from the Diocese. “Now, here was this nation, this language, that was being heard throughout the entire world at the canonization,” he said. “It was deeply moving.”

Miracles past and present

Terry Steele is a parishioner at Christ the King Parish in Liverpool. As a Native American board member at the Shrine, she focuses on telling the story of St. Kateri and spreading hope through the power of prayer. She and Bramble often hear about miracles of healing attributed to St. Kateri.

“After Kateri’s death in 1680 many miracles have been reported and continue to this day,” said Steele. In 2006, the remarkable recovery of Jake Finkbonner from flesh-eating bacteria was attributed to Kateri. When Steele travels throughout the region, she recites the story of Finkbonner and how his recovery led to Kateri’s canonization.

“Jake was in kindergarten when he contracted a flesh-eating bacterium from falling on a rusty basketball pole,” said Steele. “The disease spread rapidly, and Jake was losing the battle. At the suggestion of their pastor, his parents summoned prayer groups to pray to Blessed Kateri to intercede for Jake.”

Steele explained that a Mohawk nun by the name of Sister Kateri Mitchell came to the hospital with a relic of Blessed Kateri, laid it on Jake and prayed with the parents. “The doctors, who had given up hope, couldn’t explain how the disease had stopped spreading.” Jake recovered and now attends Washington State College and is studying to be a doctor.

Bramble receives many emails and letters from people across the country who share their stories of miraculous recoveries. In August 2020, Bramble was emailing with a young woman in Los Angeles whose sister was very ill. “She requested that we send her a Kateri cross and water from the baptismal spring that is here on the grounds,” said Bramble. “We sent her the items and received this response via email:

“‘My sister was very sick. We didn’t know if she would be allowed to leave the hospital. I prayed to St. Kateri for her. She finally came home but it took over a month before she could eat anything. She was still weak, but she wanted to pray outside. I could feel St. Kateri’s influence in this. As you can see from the photos, it’s an area with no flowers at all.’”

The woman explained to Bramble that nothing would grow in their backyard, where they went to pray and anoint her sister with water from the shrine. The next day, four lilies had sprung up and were in bloom. “‘We know that St. Kateri was called the Lily of the Mohawks,’” said the woman. “‘We just felt this had to be a sign from her. My sister is doing remarkably better. She is still recovering, but we no longer fear for her life like we did before. I know St. Kateri heard our prayers.’”

“We need miracles in this life we live in today,” said Steele. “We don’t stop praying to Kateri because she’s performed miracles in the past. That’s the point of continuing to tell her story. She can change people’s lives and give us hope. Kateri had a deep faith in God. It is the faith that heals,” she said.

The candle chapel and the grounds of Saint Kateri National Shrine and Historic Site are open year-round. Bramble said that anytime people want to come and walk the grounds that Kateri walked, they are welcome between sunrise and sunset every day of the year. Visit the website at www.Katerishrine.org for directions and hours of operation.