Little Sisters of the Poor get unscheduled visit from Pope Francis 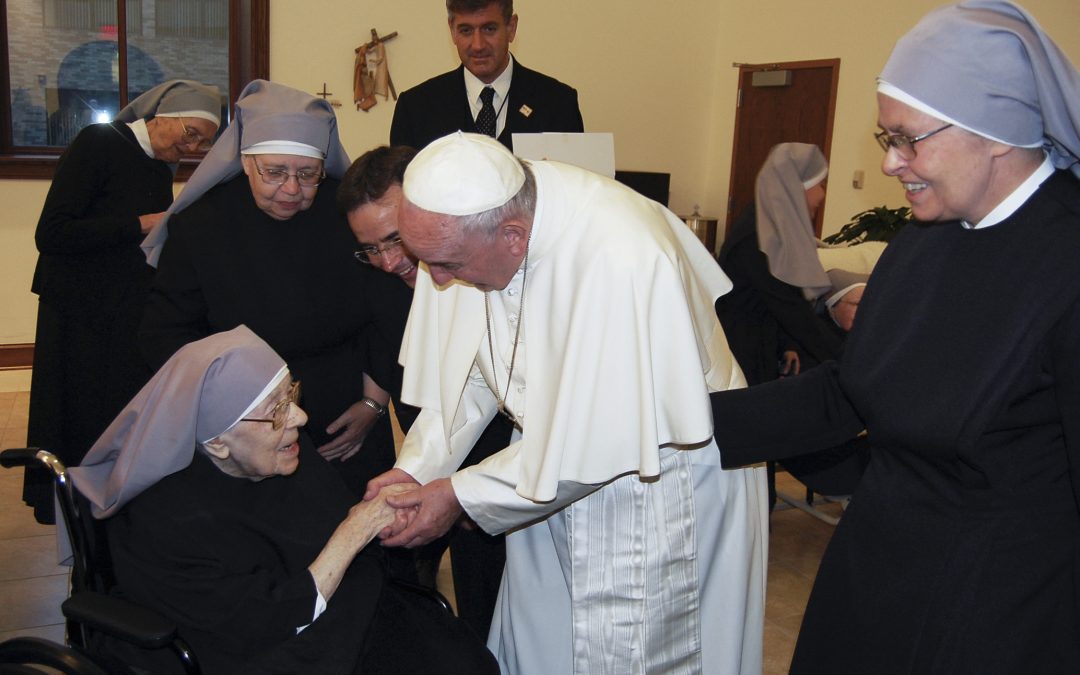 WASHINGTON (CNS) — Pope Francis made a previously unannounced 15-minute stop Sept. 23 at a Washington residence operated by the Little Sisters of the Poor, where he met with about 45 sisters.

Sister Constance Veit, communications director for the Little Sisters, said the pope talked individually with each sister, ranging in age from novices to 102-year-old Sister Marie Mathilde, who is Colombian and spoke to the pope in Spanish.

Jesuit Father Federico Lombardi, the Vatican spokesman, told reporters in Washington that evening that the papal visit was intended as a sign of support for the Little Sisters’ lawsuit against the Obama administration’s mandate that all employers offer contraceptive coverage in their health plans or participate in a religious “accommodation” that the sisters have refused.

But Sister Constance said Pope Francis made no mention of the lawsuit during his visit. Rather, his message to the group was about the Little Sisters’ “mission to the elderly” and “how important it is in a society that tends to marginalize the elderly and the poor,” she told Catholic News Service Sept. 24.

“We were deeply moved by his encouraging words,” she added.

Sister Maria del Monte Auxiliadora, the mother general, was told after the ceremony that Pope Francis wanted to make a five-minute visit to the Jeanne Jugan Residence, located across the street from the Basilica of the National Shrine of the Immaculate Conception and not too far from the St. John Paul II Seminary.

Pope Francis made the stop between the canonization of St. Junipero Serra at the basilica and a visit to the seminary, run by the Archdiocese of Washington.

Because his visit was so brief, the pope was not able to meet any of the home’s residents, Sister Constance said. The visit ended up lasting about 15 minutes, she said.

In addition to the 12 nuns who live and work at the Jeanne Jugan Residence, sisters from other homes operated by the Little Sisters of the Poor and the order’s postulants were invited to the meeting, Sister Constance said.

The Jeanne Jugan Residence provides independent living, assisted living and nursing home care to low-income seniors. Although it currently has 80 to 90 residents, it is undergoing renovations and will upon completion reach full capacity of 100 residents, Sister Constance said.