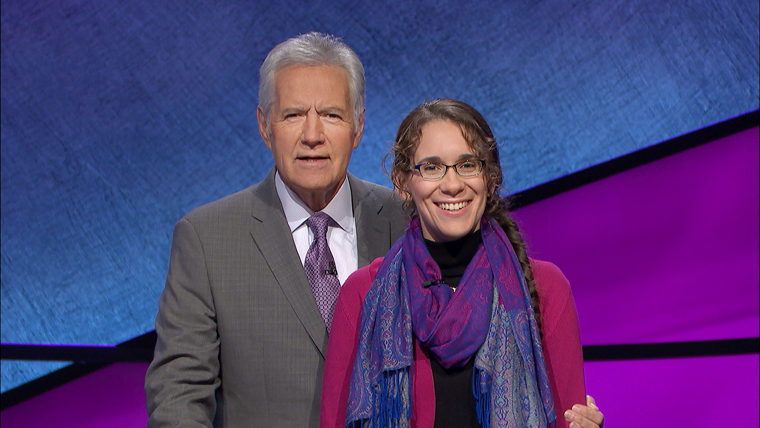 At St. Joseph the Worker Church in Liverpool, meticulous lector Ashley O’Mara has been told, “When you speak, I’m actually paying attention.” Many people across the country were paying attention March 12 when O’Mara appeared on the TV show Jeopardy!

How did the Baldwinsville woman become a Jeopardy!-level polymath? Answer: doing a lot of reading ever since she was little; studying enough to graduate summa cum laude from Le Moyne College; working on her Ph.D. in English and serving as a teaching associate in the English and Textual Studies program at Syracuse University; going over old Jeopardy! shows on the internet; learning about all the presidents and the Grammy artists of the last ten years; practicing with her imitation Jeopardy! clicker and with her family and friends (“I have the best, most supportive friends in the world”); and mastering the abilities to entertain, charm, and communicate.

“It did not feel like 22 minutes up there” on the Jeopardy! stage Dec. 12, 2017, in Culver City, Calif., she said, “it felt like five!” It was long enough for her to suddenly experience a ton of Google hits and unexpected people adding her on Facebook. “It’s a big deal apparently,” she said.

Well, not many people get to throw an “absolutely electric” Jeopardy!-night party, as she did. Somebody forgot to say “Quiet on the set,” because the Sitrus on the Hill Bar & Lounge was filled with clapping, whooping, and kibitzing at the Sheraton Syracuse University Hotel & Conference Center. Ashley’s brother, Allan O’Mara, figured it was the smartest room in Syracuse with all the Ph.D.’s and master’s students flashing brilliance. Ashley had a nifty challenge in store for the attendees before they all watched the TV show on a Fox Syracuse DVD. The show was blacked out of the local TV market because of a disagreement over programming rates.

The worlds of television and church had blended momentarily the previous weekend when Father Daniel O’Hara announced to the St. Joseph the Worker congregation that their lector would be appearing on Jeopardy!

So Ashley also serves as an example to lectors. “I’m not trying to perform it but I am trying to speak it, give voice to it in a way that people will be able to access it,” she said. That can mean slowing down so that people who have hearing impairment are able to hear it.

She doesn’t just get up and read to the congregation. Her prep work includes reading the Word’s background literature, delving into the Old Testament, or “digging into some of the translation issues of the Epistles in order to try to represent for people a Word that speaks to them.” She has succeeded if “they’re similarly enraptured by the text.”

On March 12, the Sheraton gathering was enraptured by the test: “I’ve put together a game of Jeopardy! if anybody wants to play,” Ashley announced. Bubbly souls suddenly shuddered. To kibitz about someone else on a game show is amusing; to expose oneself to Alex Trebekian evaluations is possibly humiliating. One attendee owned up to fear of being unmasked as a trivia cretin.

Enjoying her switcheroo as contestant-turned-Trebek-surrogate, Ashley mollified the timorous: Instead of individuals competing, the contest involved teams — Lemons, Oranges, Strawberries, Bananas, and Pears. Joining the Pears as a celebrity teammate was children’s author Bruce Coville.

“The turnout was so, so much more than I ever expected,” Ashley said, “especially for the Monday of spring break. Friends I hadn’t seen in an age; dear colleagues; people I only recognize by sight from being around campus, but whose names I do not know; plus Bruce Coville making an appearance made it feel like a real red-carpet event.” In 2002 and 2003 in the Syracuse Post-Standard, Ashley won first place in Coville’s finish-the-Halloween-story contest; she placed second in 2004.

The Sitrus room was dark compared to the brightness of the real Jeopardy! set. Her ever-smiling countenance appearing bluish from the reflected light of her laptop, Ashley presented categories that elicited answers such as “What is ‘To be, or not to be’?” and “Who is John Paul II?” Ashley’s designated “spotter” gamely tried to pick out the team whose collective hand went up first. And not all responses were in the form of a question, a departure allowed by the indulgent boss of the show. She did a lot of laughing while avoiding the brutally honest You-now-have-nothing persona of Alex Trebek.

The final category in the improvised game was The Sixteenth Century. The clue centered on the Spanish Basque priest who founded the Jesuits. The correct response: “Who was Ignatius of Loyola?” The Lemons came in first with a mythical $6,600.

Around 7:30 p.m., when the real Jeopardy! show is supposed to air in Syracuse, Ashley started showing the DVD of her appearance. Appropriately, the show that requires unearthly knowledge uses a depiction of the cosmos as the backdrop on the intro — only ethereal minds need audition.

Ashley sat in the front row of the bar as her fans looked at the wall screen in awe. There she was, the bold local genius, hoping to wield a wicked clicker against the defending champion, Mark Ashton, a bespectacled sharpie from Elmhurst, Ill., and Zach Dark, bespectacled clue-chomping poker-face from Hoover, Ala. The applause for Alex was no more raucous than that for Ashley in the little “theater” on the SU hill. The show was taped at 10 or 11 a.m. PST by the time the three contestants got through the rules, makeup, and rehearsal. It was the first of several tapings that day.

On the screen, Ashley showed all the poise she inherited from her late grandma, a very strong woman. Before the replay of the show began, Ashley had said: “Honestly there’s a lot more riding on lectoring for me. Jeopardy! is just kind of like my own personal performance; I didn’t expect to get on the show kind of ever, and certainly not already. So for me it was like, I’m going to go out there and I’m going to have fun, and no matter what happens, I will have had fun: I was on Jeopardy!”

Categories for the first round of the game: The 7 Ancient Wonders; This Is Not a Drill (Or Is It?); Reversible Compound Words (e.g., boathouse, houseboat); “M”tertainment (each correct response beginning with the letter “M”); Beauty Trends; and Quoth the Amendment (to the Constitution).

She bravely wagered her entire $600 when she hit upon the Daily Double in Quoth the Amendment. The amendment in question outlaws putting a person in jeopardy twice for the same offense. On the screen, Ashley shifted around slightly as if trying to shake out the right response. She squinted and said, “What’s the Sixth Amendment?”

Alex told her she was just off; it was the Fifth Amendment.

But Ashley rallied with two correct responses in Beauty Trends, rising to $1,400 and taking the lead. However, she missed a $1,000 clue about The 7 Ancient Wonders before the show went into its first break. When it came back on for the interview portion, she told Alex and the audience about the time she met cellist Yo-Yo Ma.

Ashley had two more correct responses in the first round. One of them was a video clue that showed a bizarre baboon whose face virtually glowed with red, white, and light blue coloration. “What’s a mandrill?” she said.

Ashley had three correct responses in that round: “What is show off?” (ostentatiously display ability); “What’s a slate?” (for 19th-century chalk markings); and “What is Baikal?” (a huge Siberian lake). She lost $3,000 on a Daily Double dealing with Lake Como in Italy.

The “Final Jeopardy!” category was First Lady Facts: Identify the governmental program that Bess Truman had been enrolled in for about 17 years, the longest of anyone.

Ashley wagered $0, so she lost nothing when she guessed wrong (Social Security); Zach and Mark got it right (Medicare). Ashley finished with $600, with nine total correct responses and five, including “Final Jeopardy!,” incorrect. Zach won with $29,000; Mark was next with $6,000. Ashley looked over at Zach and clapped. She took a deep breath and kept smiling. As the winner, Zach kept all of his total; Mark was awarded $2,000 and Ashley $1,000.

Asked how many times she had tried to click in and was beaten to it, Ashley said, “A lot.” And any player who clicks in too soon must wait an intimidating quarter of a second before clicking in again.

Ashley’s mother, Margaret O’Mara, of Baldwinsville, was a member of the second-place Strawberry team. Of her daughter’s TV performance, she said: “It was an experience, you can’t take it away from her; and it’s a once-in-a-lifetime thing. … I was proud of her. … They’re all winners to be on the show.” Mother and daughter stayed to watch the next two games, during which Ashley knew a lot of the correct responses. “It’s hit or miss with the board,” Margaret said.

God blessed her with “smart, intelligent, beautiful children,” she said. Ashley’s brother Alexander O’Mara, a web developer from Baldwinsville, was the valedictorian of his computer art and animation school at SU. The other brother, Allan, also of Baldwinsville, a President’s List electrical engineering student at Onondaga Community College, just got accepted to Rochester Institute of Technology.

“She’s the smartest person I know,” Allan said of Ashley. “And I’m very proud of how she handled the entire ordeal. … She always looked happy while she was doing this, and I could tell that she was—the entire time. She was having a good time. She wasn’t playing for money, she was just there because she enjoyed it.”

“I would like to,” said the member of the Strawberry team, “but I don’t feel like I’m as capable as she is.”

Stephanie Wyatt, of Syracuse, interim pastor of West Baptist Church in Oswego, was a clutch performer for the Pears, correctly responding to the Ignatius of Loyola clue. Asked to assess Ashley’s performance on national TV, she said, “I thought she did amazing. … She clearly had a really good experience.”

Stephanie’s spouse, Adam DJ Brett, who is pursuing his Ph.D. in religion at SU, also played effectively for the Pears. He said, “I’ve done a lot of Jeopardy!-style games with friends, … so I think it’s a really fun way to get people engaged and involved.” Bowing to her performance, he said he experienced “second-hand anxiety” when Ashley talked about the penalty for clicking in too soon.

Her aura of game-show legend having been established, Ashley graciously cut up brownies for her fans; with any luck, it was brain food.

One fan noted that Jeopardy!  contestants rival an artificial-intelligence machine. “Yeah. … Sherlock Holmes,” Ashley said. But stunning intellects must get their rest. “When I was finally able to fall asleep (nearly 3 a.m.!),” she said, “I fell asleep crying happy tears.”

Asked if Family Feud is next for her, Ashley didn’t rule it out, but possibly something bigger awaits.

“Honestly if I could make a living of competing on quiz shows,” she said, “I’d do it full time. But if Alex decides he wants to retire, he should definitely call me!”