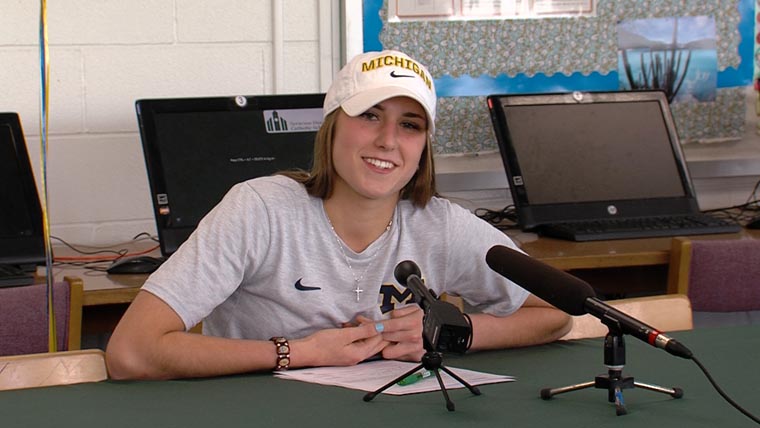 The University of Michigan fight song broke out in the Bishop Ludden High School library. Called “The Victors,” the tune is creative, exuberant, bold — like the senior who sat alone at a table and smiled a Wolverine smile.

With her fans seated and standing all around her Nov. 8, Danielle Rauch signed her National Letter of Intent to play basketball next year at the Division I Ann Arbor school, where she will study kinesiology, the science of human motion.

The 5-foot-8-inch point guard is already the Gaelic Knights’ all-time leading scorer — for girls or boys — with 1,484 career points. She averaged 17.9 points, eight assists, 6.6 rebounds, and five steals a game last season. Her team won the league and sectional titles. It was Ludden’s first Section III Class B championship since 2006, and Rauch was named the 2017 All-CNY Small Schools Player of the Year.

“I’m really honored to be able to celebrate this moment with all the people around me,” Rauch said in the crowded library, “and especially Bishop Ludden, because without Bishop Ludden and the basketball program here, and Mr. [Gallagher] Driscoll and Coach [Zach] Servidone and my parents, and Coach [Nicole] McManus, and Coach Debbie [Morrell], and Jay [Costello], and all the coaches I’ve had here, I would never be signing this letter today.”

The University of Michigan, she said, “felt like home when I was there: the people and the atmosphere there — it just felt like somewhere that I really fit into and that I’ll be successful at for the next four years.”

“People like Danielle deserve a day in the sun,” Athletic Director Driscoll said, “because she’s done everything the right way. And she’s all about everybody else. And it’s never always been about her.”

“She has unfinished business,” Driscoll said, “as the rest of her teammates do, so we’re super excited.”

The business is unfinished partly because Ludden’s season ended last year with a loss to Seton Catholic in the state regional game. (Seton went on to win both the state Class B championship and the Federation Tournament of Champions Class B title.)

“Yes,” Rauch said, “definitely gotta get through sectionals, regionals, states, all that.” She also hopes to “get the 2,000th point this year.”

It should be easy, right, less than 600 points away?

“Yeah, less than 600; I don’t know if you call that easy, but we’ll see,” she said with a comical drawl, drawing more laughs.

“The whole team, the current team, texted me congratulations, and I talked to some of the other commits in my grade, so it’s good,” Rauch said.

According to an email from the Wolverines, Rauch is considered a three-star recruit by ESPN, and she played AAU for I-90 Elite. Her father, Len, played for Michigan Men’s Basketball Head Coach John Beilein when he coached at Le Moyne College.

She comes from another great basketball family. Coach Beilein always tells the story about how her dad changed his life because he was such an impact player for his program at Le Moyne. I think Danielle fits in that same mold. She is a fierce competitor who will run through the wall to chase down a loose ball; she will take a charge to win the game. She has a toughness about her, kind of old school that you don’t really see in today’s game. She has great leadership skills and can play multiple positions. Her toughness allows her to defend the other team’s best player. She is a winner; she will sacrifice whatever she needs to in order to win the basketball game. She is just a hard-nosed, tough player who you need in your program, similar to Michigan great Jenny Ryan.

Asked what basketball skills she has been working on, Rauch said: “My shot. Definitely my shot. And my mentality: how I go into games with confidence and this year, especially, patience, I think, because we have a young team. And I think it’ll be fun to work with the younger girls to build a program.”

It will take effort because another all-star from last year, Laura Patulski, is out for the season after suffering a torn knee ligament playing soccer.

Ludden Coach McManus, the 2017 All-CNY Small Schools Coach of the Year, said Rauch gets it done on the basketball court and in the classroom, where she takes advanced-placement classes.

Michigan, Coach McManus said, is “getting a really good player who knows how to win and knows the game: one of the best point guards here in Central New York. … For sure, ‘kind of old-school’ toughness — I couldn’t say it any better. … She can read the defense and make a move on anybody. She’s going to … give them the business. … She’s not afraid at all.”

The coach added: “She gives all the glory to God. She’s very religious; she has strong faith in what she’s doing, and a very strong belief, and that’s why she is where she’s at right now.”

Rauch and junior forward Aurora Deshaies will be leaders of the Lady Gaelic Knights this year.

“We both have one goal in mind … get to states, win states,” Deshaies said, “start off with the sectionals and go on from there. … We have that special bond. We’re best friends. We’ve grown together. … So she’s kind of pushed me, and I pushed her. … So we push each other.”

One day next year in Ann Arbor, an old-school Wolverine will come out to fight.