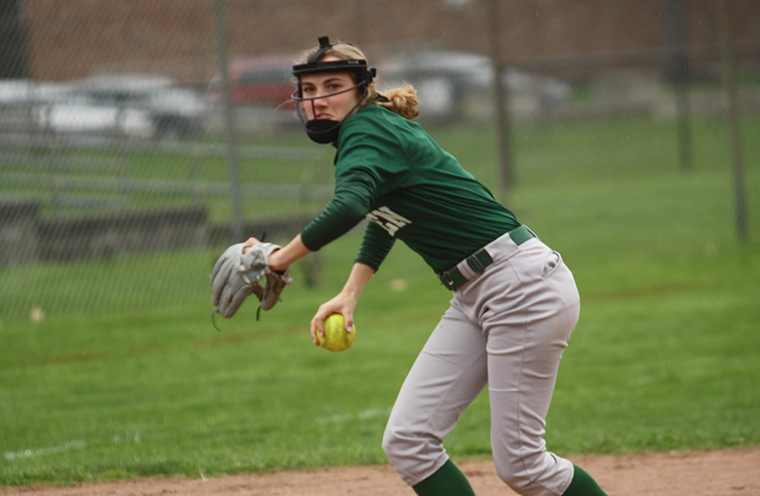 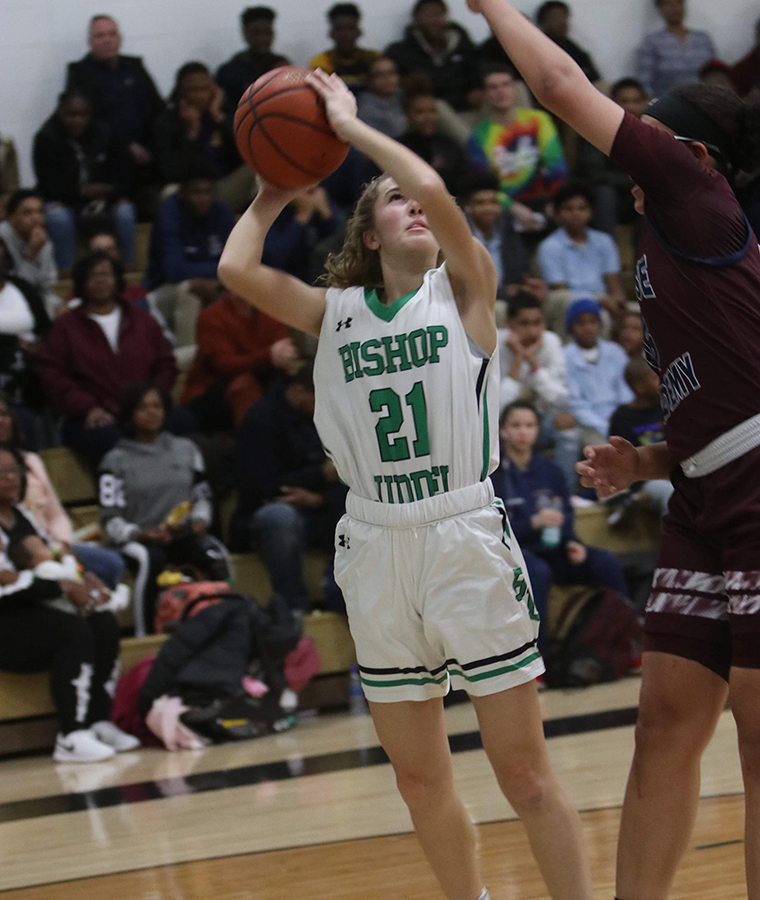 Bishop Ludden junior Kaitlyn Kibling can play anywhere in the field, Softball Coach Tom Royal says. “She’s one of the most talented student-athletes I have every coached,” he says. “Her work ethic is impeccable and she’s relentless.” Kaitlyn also plays point guard for Ludden’s basketball team. “She’s definitely a hard worker,” says Ludden Basketball Coach Carm Petrera. She adds: “She’s one of my team captains. She’s a tremendous floor leader. When she’s not on the court, we definitely miss her presence; you can tell the game just pretty much shifts gears. So she is definitely a kid I’m going to miss when she graduates.” (Photos courtesy Ed Mahar)

Her dad was “Mr. Watertown” and in a couple of years she’ll have a new nickname herself: “UConn Husky.”

Bishop Ludden Gaelic Knights junior Kaitlyn Kibling has made a verbal commitment to play softball for the University of Connecticut Huskies, who play in Division I, the highest level of college sports. UConn softball has reentered the Big East Conference.

“I knew all along she was D-I talent,” he said, “so it doesn’t surprise me and I think she’s in a good program; I think she’s got a chance to play right away.”

“My family is very competitive, and we like to play sports,” said Kaitlyn. One of her sisters played basketball and softball in college, and the other played softball; her brother played sports in high school.

Their father, Lew, competed against Coach Royal (Ludden Class of ’82) back in high school.

“Her dad was Mr. Watertown,” Coach Royal recalled. “Stop Lew Kibling and you stop Watertown. That was always our philosophy. It’s in the genes — that’s a great athletic family.”

Kaitlyn sought a college in the Northeast, so she attended a UConn softball camp in January, right before the pandemic lockdown. “I loved how they ran everything,” she said.

She added: “I like the coaches, they’re really good. And I love the atmosphere, and I like that they’re building a competitive and a championship culture there.”

Her best position is center field, Kaitlyn said: “It’s a bit of everything, and it requires speed and having to read the ball and see what it’s going to do — if it’s in the air, if it’s on the ground — and I like doing that.”

At bat, she reads the defense: If the infielders and outfielders are playing in, she will hit for power; if they are staying back, she may bunt. She throws right-handed but bats lefty as a slap-hitter.

Coach Royal, whose big sports when he played for Ludden were baseball and football, said: “She can hit for power and she can hit for average. So she’s my three or four in the lineup for me. She’s solid. The nice thing about it is she’s very humble, so you don’t have to see swagger, she just goes out and plays.”

In the field, he said, “she plays everywhere. Kaitlyn’s my shortstop but she can play multiple positions and I know UConn has recruited her as a utility player.”

Ludden’s softball team this year, Kaitlyn said, has a lot of seniors and juniors, “so I think we’re going to be a very strong, competitive team.”

“You’ll definitely be reading about us,” Coach Royal said. “I have a lot of talent this year and we’re keeping our fingers crossed” for the season to play out.

“I have a pretty decent senior-laden team,” he added, “so I’d really like to see them do something. And I think we owe them some emotional support in the meantime. I think we have to kind of almost coach them through this because this is hard. They’re used to the routine of playing, and we have to offer them that support and say, Hang in there. Kids aren’t robots.”

“Kaitlyn’s probably one of the most athletic kids I’ve seen in a long time,” Coach Petrera said. She added: “You give her a sport and she succeeds at it. Honestly, she’s a coach’s player. If I could have 10 ‘Kibs’ — we call her ‘Kibs’ or ‘Kibby’ — I’d be a pretty happy coach.”

Kaitlyn could be a college basketball player, Coach Petrera said, “but softball is definitely her niche.”

Ludden Director of Athletics Gallagher Driscoll wrote in an email that Kaitlyn “has been a mainstay and an all-league player on both the varsity softball and basketball teams for years. She also plays for the Conklin Raiders Gold softball travel team.

“She has done everything right on and off the field and courts. We are super proud of her! She has been raised the right way! We are very glad she is on OUR TEAM instead of having to play against her. We are expecting her to have two more great years here at Bishop Ludden.”